Toyota dealerships in the Philippines are certainly no strangers to competition. Whether through rivalry on the track in the Toyota Vios Cup or competitiveness in sales, life at the top of some of the country’s biggest-selling dealerships isn’t without its fair share of challenges.

As internet and smartphone penetration continues to grow in the Philippines, dealers of the country’s no.1 car brand now face a fresh challenge: how to provide the best level of customer service to car buyers who are inquiring online.

With 24 Toyota partner dealers on its platform, AutoDeal.com.ph, the Philippines no.1 online automotive marketplace, has played a pivotal role in helping thousands of customers to connect with Toyota dealerships across the country. In exchange, these dealers have benefited from increased accessibility, have been able to promote their monthly special offers, and in 2018, were able to compete for over more than 29,000 inquiries from prospective Toyota buyers.

As a result, select dealerships played a pivotal role in helping to create positive sales experiences for Toyota buyers on AutoDeal in 2018. From these transactions, AutoDeal was able to generate a large volume of customer feedback scores that occur every time a sales agent marks a lead as sold in the AutoDeal for Agents mobile application.

Based on these feedback scores, AutoDeal has collated the following information, indicating which dealers on average are providing the best level of online service to car-buyers on its platform: Leading the pack, with a maximum score of 5.0 out of 5.0 were three Toyota dealers: Toyota Balintawak, Toyota Pasig, and Toyota Quezon Avenue.

Feedback from buyers praised the top-performing Toyota dealers based on the accommodation of inquiry, speed of feedback, and constant updates on the purchase process. A select number of testimonials are showcased below. Among the top performing dealers were a select number of sales agents who all received 100% five-star status from successful transactions made over the AutoDeal platform in 2018. 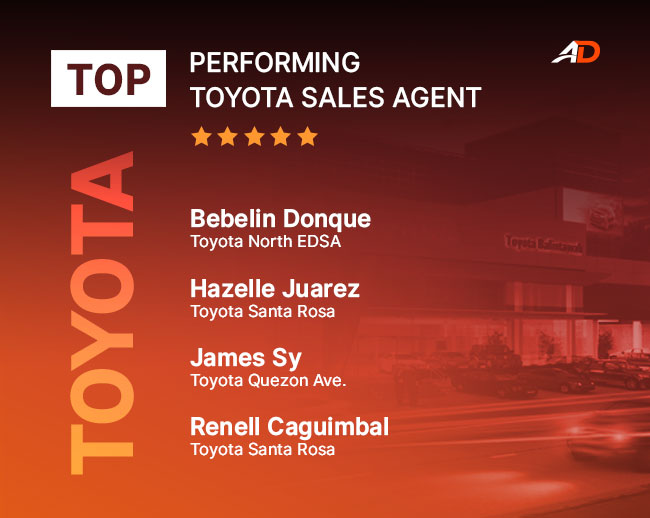 With more partners signing up to AutoDeal every week, it will be interesting to see how the attentiveness of Toyota dealerships to online customers evolves throughout 2019, and which dealer will rise to the top.