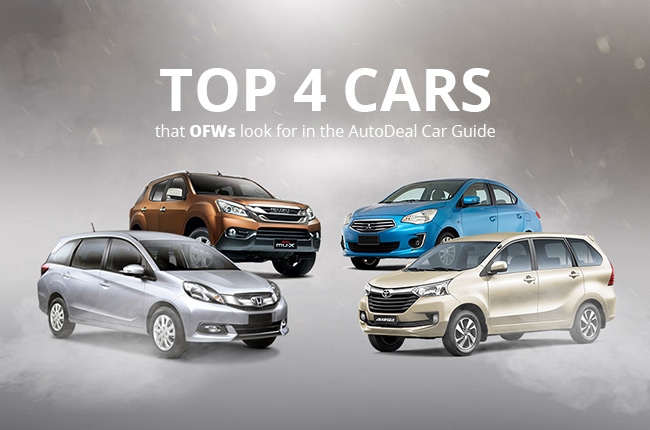 Overseas Filipino Workers (OFWs) are among the top visitors of the AutoDeal Car Guide. Aside from their relatively high income, they’re also the ones who are eager to bring convenience to their families specially that they are away from them.

Overseas Filipino Workers (OFWs) are among the top visitors of the AutoDeal Car Guide. Aside from their relatively high income, they’re also the ones who are eager to bring convenience to their families specially that they are away from them.

Because of this, we did the rankings and made a list of the most sought after vehicles on the AutoDeal Car Guide by OFWs. These are based on the stats and inquiries that we get through the website. Here’s the verdict.

The Toyota Avanza has been a trustwothy mini-MPV and continues to garner popularity to the buyers since it has been brought to our shores. It has ample interior space capable of seating up to 7 people – perfect for a small family with 3 to 5 children.

It can be comparable to its big brother, the Toyota Innova. However, after its refreshed version was launched last year, its popularity continues to rise surpassing the Innova in number of page views and inquiry.

SUVs are among the sought after segment for growing families primarily because they're big, versatile, and good-looking. The Isuzu mu-X is among the frontrunners of that segment because of its affordable price tag and ride comfort.

The mu-X also has a premium 7-inch touchscreen entertainment system; something that the passengers will definitely enjoy during long drives or family outings. More importantly, its price tag is relatively lower than the other players in its segment.

As the first affordable 7-seater from Honda, the Mobilio has a subtle advantage in the design department over its competitors. With ample legroom and headroom inside, it's no wonder it has become popular among OFWs as a family car.

In addition to that, the Mobilio is easy and comfortable to drive because of its continuously variable transmission (CVT). If you want a car that's stylish and has a modest price tag, then this mini-MPV is perfect for you.

The MItsubishi Mirage G4 is the sedan version of the award-winning Mirage. Given that it's subcompact sedan, its trunk can give you a lot more cargo space than its hatchback counterpart without having the need to fold seats. This is also a practical choice for a budding family since you can own one in just over half a million pesos.

The Mirage G4 also runs on CVT, which is just one of the few in its segment. This, plus its maneuverability through narrow city streets, makes it a sensible choice for a modern Filipino family that lives in the Metro Manila.

For the full specs and features of each cars mentioned, visit the AutoDeal Car Guide.