Featuring a strong and bold design, the Hyundai Kona is Hyundai Philippine's entry to the five-door subcompact crossover segment. Named after a place in Hawaii, the Kona made its global debut in 2017 then made its way a year after in the Philippine automotive market. It's characterized by a polarizing exterior design, led by a pair of slim daytime running lights, dynamic body character lines, and its 2-tone finish that make it a unique vehicle. Contrastingly armed with thick under claddings and 170mm ground clearance, the Hyundai Kona is an urban crossover that's made for the unforgiving Metro Manila roads.

The Kona is locally available with a 2.0-liter Atkinson-cycle gasoline engine that can put out 147 hp and 179 Nm of torque. This powertrain comes with a 6-speed automatic transmission. You can get a Hyundai Kona in these color choices: Red, Phantom Black, Acid Yellow, Blue Lagoon, and Ceramic Blue.

The Hyundai Kona was launched globally in June 2017 as the leader of Hyundai's new design language. It is aimed to enter the budding subcompact crossover segment at that time, armed with quirky looks and polarizing appeal.

In the Philippines, Hyundai Asia Resources, Inc. (HARI) brings in the Kona at the 2018 Manila International Auto Show along with three other new Hyundai cars. HARI officially starts selling the Kona in one variant two months after it showcased the crossover at the auto show.

The Hyundai Kona has a front-engine, front-wheel-drive layout, with the power coming from a 2.0-Liter MPI Nu Atkinson cycle gasoline engine that produces 147 hp and 179 Nm of torque. The engine is mated to a conventional 6-speed automatic transmission.

Front suspension is a McPherson strut setup while the rear end gets a coupled torsion beam axle. Front and rear brakes are both discs, with the front one having a ventilated type.

The Hyundai Kona's driving performance stands out, thanks to its 2.0-Liter Atkinson cycle gasoline engine. It didn’t have sports car-like performance but the engine was responsive with every accelerator input, even from a standstill, almost like it’s eager to move forward before you actually wanted to. The six-speed automatic transmission shifted swiftly and smoothly, as well.

The Kona’s handling was commendable – it felt light and nimble while having negligible body roll and minimal understeer on non-racetrack turns. Combined with its balanced suspension setup, the Kona’s ride comfort is noteworthy and one of its main strengths.

In terms of technology and convenience features, the Hyundai Kona isn't the best out there but it's alright. It has the essentials like speed-sensing door locks, power-adjustable side mirrors, and auto-down driver’s window. It also has a keyless entry and push-start button for added convenience, as well as cruise control.

At the center of the dashboard, the Kona has a floating non-touchscreen infotainment system with monochrome display. It connects to smartphones easily via Bluetooth or iPod, while the sound coming from the speakers could pass as decent for audiophiles.

The Hyundai Kona's major design deviation is its three-tier headlamp configuration that separates the LED daytime running lights and turn signal lights (on top) from the headlights (in the middle) and the fog lamps (at the bottom). The front's overall look is reinforced with the brand's 'Cascading Grille', which Hyundai prefers to call as its 'armor'. At the rear, the turn signals are mounted on the rear bumper. The Kona's thick under claddings are also one of its renowned traits.

Stepping inside the cabin, the Hyundai Kona has a rather timid design compared to its exterior design. It has a dark-themed cabin, which includes the black headliner. Materials used are mainly soft-touch plastics, some hard ones, fabric, and a tad touch of faux leather.

The Kona's cabin space is a bit limited, especially at the rear seats where tall individuals will have difficulties. Nevertheless, the whole car can still accommodate five average-sized adults. The trunk can fit an average-sized stroller and a few grocery bags.

The Hyundai Kona has six airbags – two in front, two at the sides, and two curtains – while both the driver and passenger get seatbelt reminders. ABS, immobilizer, and ISOFIX child seat anchors also come standard, as well as a tire pressure monitor.

The Kona doesn't have an ASEAN NCAP rating but its European counterpart gave it 5 stars. It's important to note, however, that the Kona tested by the EURO NCAP has active safety features like lane keeping aid and speed assistance.

During our review, the sole variant of the Kona stood out with its exterior design that worked well for the car. You'll also like its above-average driving dynamics and great fuel economy reading.

On the flip side, the Philippine-spec Kona falls a bit short on tech features, considering the availability of high-tech toys on the global-spec Kona. The materials in the cabin are also rather tamed when compared to its exterior design. Interior space can also be improved.

Connect with the top Hyundai sales agents in the Philippines. These agents have good reply speeds, process transactions quickly and have good customer reviews View the most compared cars versus the Hyundai Kona 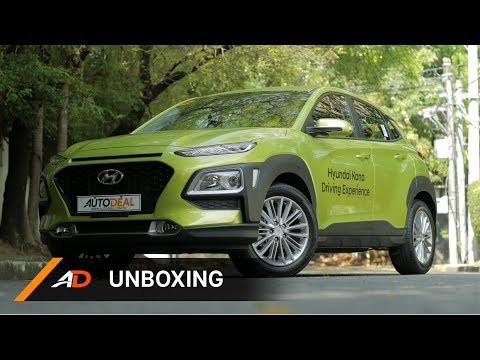 Read reviews from verified car buyers and find out from real owners what it's like to own Hyundai Kona.

Does the Hyundai Kona have sunroof?

Does the Hyundai Kona have navigation?

How many seater is the Hyundai Kona?

The Kona is a 5-seater subcompact crossover.

Where is the Hyundai Kona made from?

The Hyundai Kona is assembled and manufactured in South Korea. Get Notified for Hyundai Kona Alerts