Online vehicle sales maintained tenacity in April as the average lead to sale conversion timeline for transactions made across the AutoDeal platform sped up by 45% in comparison to the start of the year. Beginning in March, the average timespan for a consumer transitioning from the inquiry stage of the buying process to a closed sale decreased from 70 days to 48 days, with a third of all AutoDeal transactions now completing within 30 days of their original inquiry date.

Attractive summer promos from many of the country’s top vehicle manufacturers combined with consistent improvement in response times among many of AutoDeal’s partner dealers could be some of the possible cause for the increased volume of sales. Customer inquiries rose by 8.6% in March and April compared to January and February which would suggest that dealers are still in for increased online sales volumes through for the next two months. As indicated above, our conversion timeline graph still indicates a small fraction of 3.26% of sales occurring from customers who inquired way back in 2016. In addition, 9.78% of consumers still completed sales within 120 days while 17.39% transacted within a 90 day timeline. A significant 69.57% of sales now close within 60 days of their initial inquiry.

On average, female buyers are transacting much quicker than males, with women taking on average, 13 days less time than men to transition from an original inquiry to a finalized purchase. 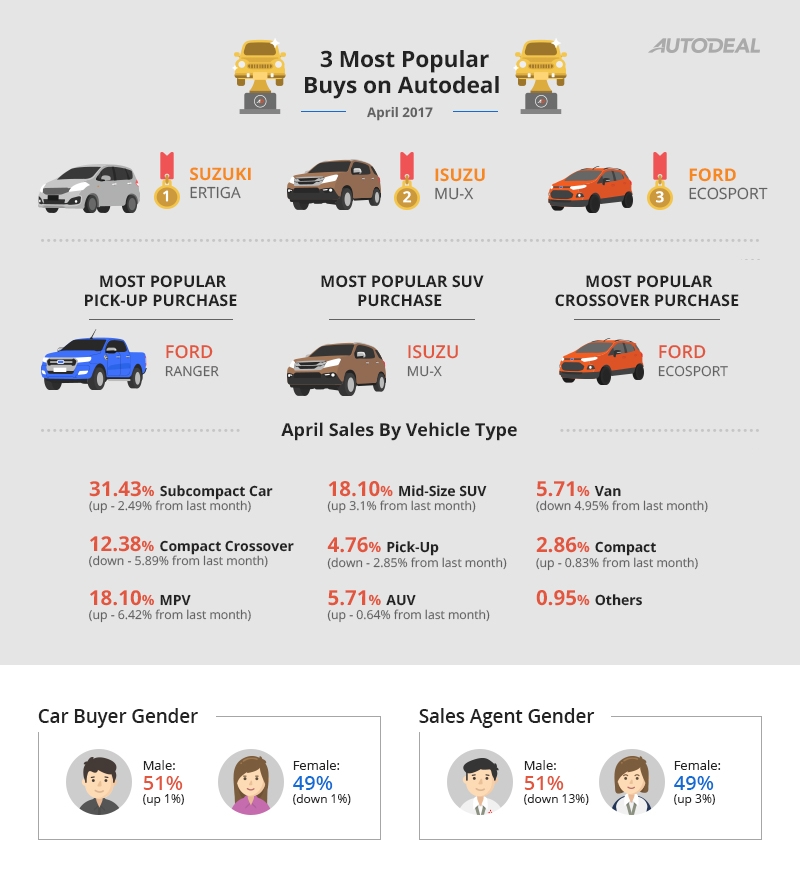 The Suzuki Ertiga continued its 3rd consecutive month in the top 3 most popular buys, achieving for the first time the coveted no. 1 slot. This is a surprising revelation for a brand who’s market share average at around 3.24% last year. The Isuzu mu-X bumped its way to the no. 2 slot, narrowly achieving a boost in interest that saw it surpass the previous 2 front-runners: the Toyota Fortuner and Ford Everest. The Ford EcoSport, slid into the 3rd spot, which continue it’s 2nd month run in the top 3.

After a slight dip in March following high yielding sales results in February, subcompact vehicles gained a 2.49% resurgence whereas compact crossovers dipped by 5.89%. April proved to be a popular month for seven-seaters as MPV’s rose by 6.42% and Mid-Size SUV sales raised by 3.37%. The volume of females making car-purchases on AutoDeal also made an astonishing jump in April accounting for 49% of all successful transactions. Female buyers out-purchased their male counterparts in both the subcompact and MPV categories during the month of April with popular choices including the Mazda 2, Suzuki Swift, and Hyundai Elantra. Small city cars like the Toyota Wigo and Chevrolet Spark also topped the ladies choice. For MPV’s the Suzuki Ertiga made up the bulk of sales, followed closely by the Toyota Innova and Honda Mobilio.

Males, on the other hand, had a much higher volume of SUV purchases with the Isuzu mu-X, Toyota Fortuner, and Ford Everest. The Honda BR-V also won a higher degree of favor among male buyers in comparison to females.

Sales from customers located in Metro Manila now currently equates to 39.73% of all AutoDeal assisted vehicle purchases. In 2nd place, the region of CALABARZON makes up for 19.68% with Central Luzon following in 3rd with 13.79%. Davao and Eastern Visayas based sales also continue to show consistent improvement.

With an 18% improvement in overall dealer response times between January and April 2017, it is expected that we will continue to see an increased volume of sales occur throughout the months of May and June as dealers ride on a wave of high consumer interest.