AutoDeal's generated vehicle sales surged by 71% in May 2017 as data-tracking at the showroom floor showed massive improvement nationwide.

Tracking the Return-on-Investment (ROI) from vehicle sales has and always will be one of AutoDeal’s strongest commitments to its wide network of partners. However, regardless of the implementation of our Lead-Management-System (LMS); having sales representatives actively declare their sales has been somewhat of a challenge. Luckily, thanks to the recent announcement of the 2017 AutoDeal Awards, we have seen a much higher level of engagement as agents have a much clearer purpose to actively remit data in order to bring recognition to themselves and their dealers. With this, we’ve seen a massive increase in conversion rates, with some dealers growing their declared conversion from a mere 1% to anywhere between 5-12%.

Recent upgrades and upcoming enhancements in our Lead-Management System (LMS) will help drill these numbers home with even more accuracy as our impact on the vehicle sales market becomes increasingly clearer. As indicated in our lead conversion timeline graph; in month transactions (where customers convert in 30 days or less) remain somewhat strong, accounting for 20% of all of May 2017's confirmed sales. Sales from leads generated in April account for 40% of sales, further supporting our average conversion timeline of approximately 45 days after initial inquiry. A further 25% of May sales came from leads generated in the month of March 2017 while the final contingent of sales come from as early as September 2016. 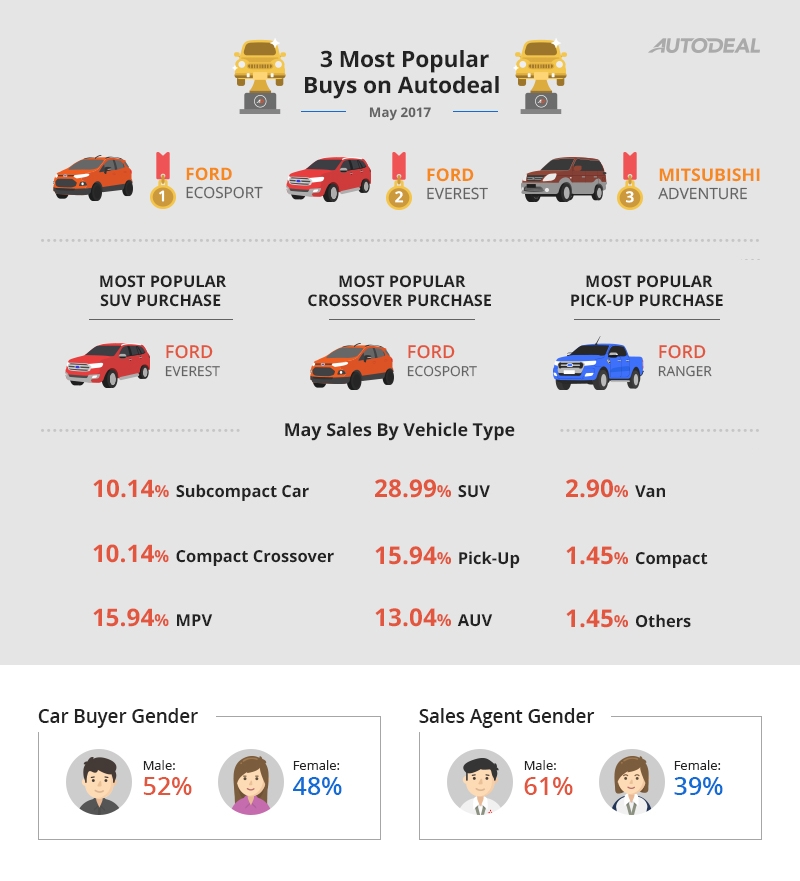 May 2017 saw a huge surge in popularity for Ford with the EcoSport marking it’s 3rd month in the top 3 by taking the no.1 slot. It was followed closely by it’s big brother, the Ford Everest, which secured a solid 2nd rank in our popularity index. The Mitsubishi Adventure (surprisingly) drove home into 3rd place, with buyers most likely looking to buy up the AUV before all of it’s final stocks deplete following MMPC’s decision to discontinue the model. Ford’s almost complete clean sweep came to a climax as the Ranger scored points as the month's most popular pick-up, nudging just past AutoDeal’s year-to-date most popular pick-up, the Nissan Navara.

52% of buyers on AutoDeal for the month were male, up just 1% from last month whereas sales agent gender showed that 61% of sales were closed by male sales agent. Yes, that’s right, these guys are really making us eat our own words after selling them short in one of our previous reports. Location wise, Central Luzon and CALABARZON have been a gold-mines this May, respectively increasing their share of the AutoDeal sales pie. This has been contrasted by a small drop in NCR sales. Areas like Ilocos and Eastern Visayas have also seen small increases in sales volumes.

With AutoDeal Leads up 35% in May 2017 compared to April; we’re expecting a good-turn out for the months of June and July.