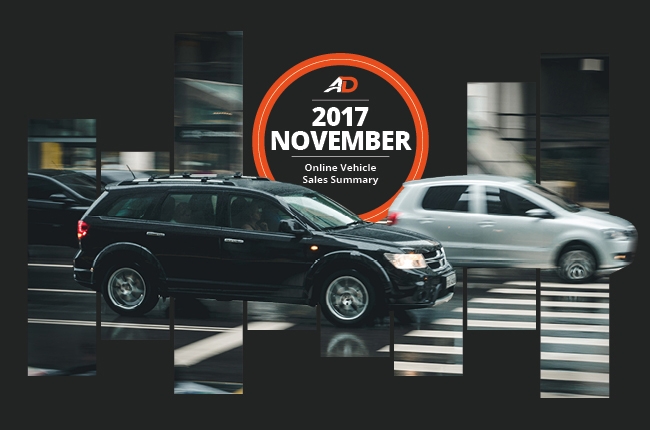 Online automotive sales generated through the AutoDeal.com.ph platform grew a further 14.8% in November 2017. Incremental online sales were fueled by a large volume of car buyers re-engaging with dealerships several months after their initial inquiry. In lieu of the recent updates regarding next years’ increased vehicle excise tax, it is expected that many buyers may be expediting their purchase ahead of inevitable price increases.

"Interestingly, we experienced a higher volume of sales from older leads in November. In particular 18% of Novembers' sales were generated by buyers who engaged during the months of June, July and August. It would seem that many of these prospects have re-engaged with dealers to complete purchases before the end of the year." added Scott. Due to a significant increase in the volume of sales conversion from leads older than 3 months, the average conversion timeline for November 2017 increased to sixty-three (63) days, rebounding significantly from October's all time low of thirty-eight (38) days. 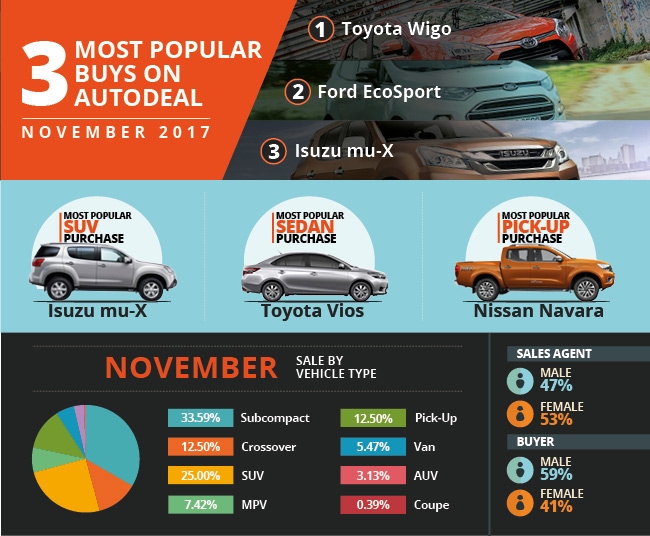 Leading the proverbial charge in sales was the Toyota Wigo which achieved its' highest AutoDeal monthly sales ranking for 2017. The Wigo, which received a recent update this year is an ideal purchase among first time buyers; who continue to make up a large portion of AutoDeal's buying audience.

Ford furthered their contribution of online sales as the EcoSport retained it's second place finish for a second consecutive month. The Isuzu mu-X completed the top three AutoDeal purchases as it narrowly surpassed competition from the Ford Everest.

A revival for subcompacts also occurred in November with vehicles like the Toyota Vios, Mitsubishi Mirage G4, Honda City, and Mazda2 seeing a notable spike in sales and lead numbers. SUV transactions also remained steadfast, accounting for 25% of sales.