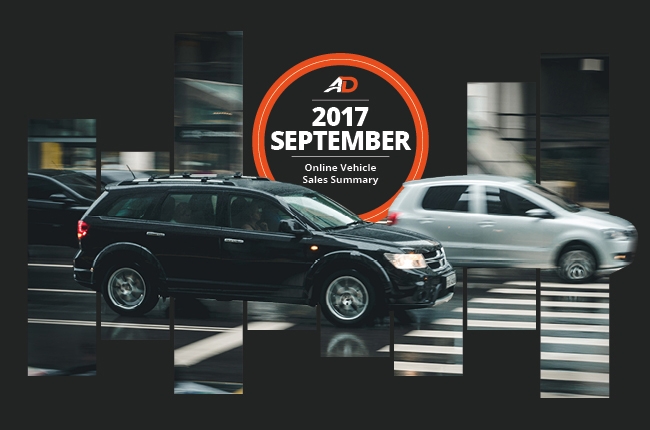 High inquiry volumes from August 2017 continued to spur online vehicle sales in September as the average lead to sale conversion timeline hit an annual all-time low of forty-five (45) days. In total, 59.7% of sales transactions recorded across the AutoDeal platform in September occurred from leads generated during August. With a high volume of sales already tallied, it is likely that August could become the highest grossing month of origin for sales this year. As such, it’s probably best to not yet abandon those August leads just yet. Acceleration in the rate of sales and continuous improvement in conversion rate continues to be a bi-product of the overall improving response times across the AutoDeal platform which in September saw a further reduction of response time among the top 50 dealers from 4.2 hours to 3.9 hours. With regards to sales, a decrease in subcompact and SUV purchases was met by increased traction for Pick-Ups, Vans, and Crossovers. In the Pick-Up category, vehicles like the Ford Ranger maintained the highest grossing volumes, possibly as a result of August’s truck month promotion. In addition to the Ranger, the Ford EcoSport continued to yield good results while the Isuzu mu-X took the mantle of the most popular SUV among AutoDeal buyers.