There are sports cars, exotics, purpose built road legal supercars, and then there’s Lotus. The original Evora was launched nine years ago in 2009, and the Norfolk-based auto manufacturer has silently been riding the waves, supposedly the start of a three car and five year master plan that was supposed to bring back names such as the Esprit. Unfortunately, later on, management  decided that things needed a change. Fast forward to 2015 and Lotus has decided to give the Evora a thorough workover, so much so that almost two thirds is completely new. The Lotus Evora 400 would bring to the table some eyebrow-raising numbers and fresh styling. While the Evora S was swoopy and had no offensive angles to speak of, the Evora 400 offers up a menacing facade and aggressive lines. I like it. A lot. And below, we’ll list down the things we loved about the Evora 400, because a handful of days with one of the fastest Evoras ever created is hardly enough to appreciate the return to Colin Chapman’s vision. 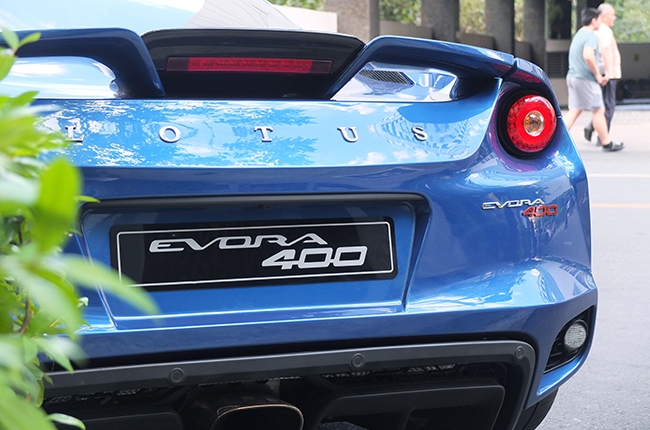 I had the opportunity to take the Evora 400 out during a weekend, with the idea to do a little car spotting in the city and surrounding expressways where exotics would usually gather. While Lamborghinis, Ferraris, and Porsches were perpendicularly parked along busy roads, I parked the Evora 400 slightly farther from the bigger groups. I kid you not when owners of Italian supercars and air-cooled Porsches actually walked over to check it out and talk a bit about it.

People would ask about the brand, the handling, the horsepower, all while asking to take pictures. This was all going on as I was trying to take a few photos myself. A McLaren passed by and slowed down to check it out, as well. While it may not be the fastest, most expensive, and most beautiful car in the area at the time, the Lotus draws attention. Could it be the combination of rarity, history, the desire to stick to the ideals of light is fast? Ultimately, seeing a Lotus is almost like a mini celebration for automotive enthusiasts. While the relationship between Toyota and Lotus has been widely documented, it’s interesting to note that the engine of the Evora 400 comes from a Toyota Camry. The only thing that bares resemblance to its Toyota origins are the displacement numbers on the spec sheet. The 3.5 liter V6 was completely reworked and tuned, with the icing on the cake being an Edelbrock supercharger that boost from 2.9 to 8.7 psi. 400 horsepower is at your every whim in a car that weighs less than 1,400kg equals a top speed of almost 300 kph and a 0-100 time of four seconds.

3. True to its Roots The Evora 400 makes excellent and efficient use of all of its working parts. There’s a reason that switch or knob is made of a certain material. There’s a reason why the all-new aluminum chassis has a torsional stiffness similar to an executive luxury sedan. There’s a reason why you don’t necessarily need 600 hp. The Bilstein dampers, huge AP Racing brakes, 285 width Michelin Pilot Supersport tires, and a torsen limited slip differential all work at their best at all times, and it creates an immersive driving experience like no other.

The idea that greatness can be added via subtraction rings very strongly in every car Lotus makes today. Less is more, and Colin would be proud.

4. A go-kart with climate control Yes, you can forget about the rumor that every Lotus ditches air conditioning for lightness. What you can’t ditch, however, is the fact that the Evora 400 handles and communicates the road like no other auto manufacturer can. From the way you slide into Sparco seat and get to grips with the fantastic driving position, to the hydraulic steering which feels perfectly weighted and sends all the right signals. It’s truly confidence inspiring, even in bad weather.

0.97 lateral g’s and 70 pounds of downforce create a planted machine that redefines your definition of flat out. You see the first corner after the start/finish straight at Clark International Speedway? You ask the Evora 400 to take that corner flat out, and it’ll tell you to hold its beer. Truly point and shoot, the Evora 400 is raw and pure. The Evora 400 has, in my opinion, the best sounding V6 out of the box on the market today. Yes, it has the active exhaust and driving modes, but the fact that Lotus sets aside a button to actually open the valves at your choosing means that the button always stays lit. Not at all sounding like an executive sedan, and more like a rally car or vintage formula racer evan at idle, the Evora 400 turns heads even before people see it. The bonus is when people realize it isn’t an Italian exotic. And with all that glass shattering, head turning, scaring-other-cars goodness, the Evora 400 still returns 8km to 9km per liter. The only question left is… Where do I sign?

You can compare quotations simultaneously from multiple Lotus dealerships. Select your preferred dealers from the list below.

Get Notified about Lotus Deals