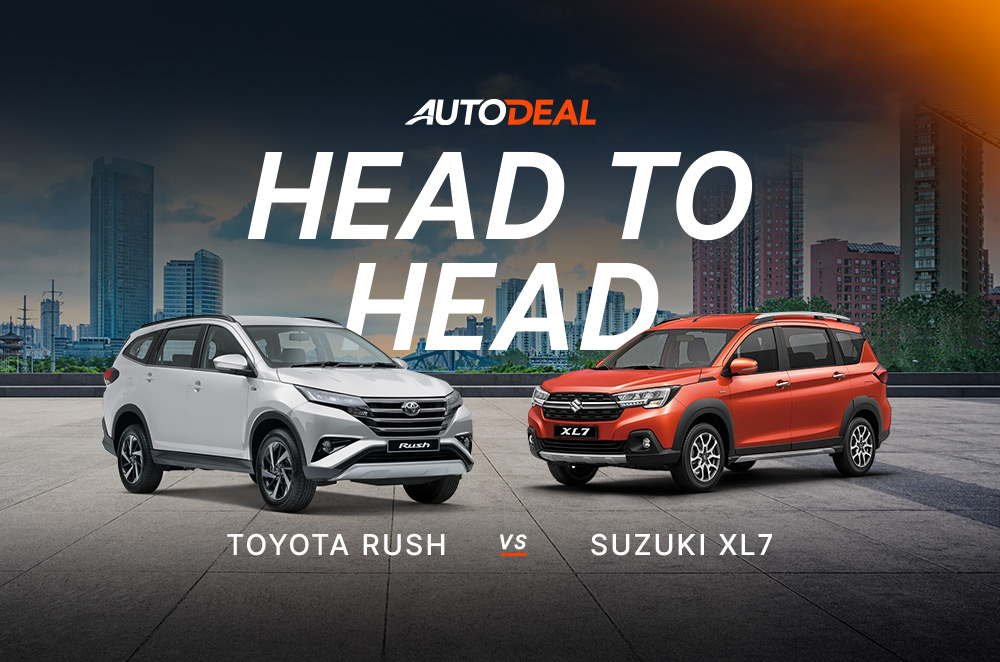 The affordable 7-seater MPV segment in the Philippines has been heating up with newer additions. When you think about vehicles in this segment, the Toyota Rush and Suzuki XL7 come to mind. The Rush, being one of the older models in the segment, still manages to pull great sales figures and has captured the hearts of many Filipino buyers for its competitive packaging. The XL7, on the other hand, is a relatively new model to the segment, however, it brings with it more features and a unique look that will surely tick the right boxes for those looking to get an affordable 7-seater vehicle. Both of these vehicles offer great ground at an affordable price point of just slightly above the P1-million mark. With that in mind, we compare one of the original models that started it all versus the new kid on the block that brings with it more features. 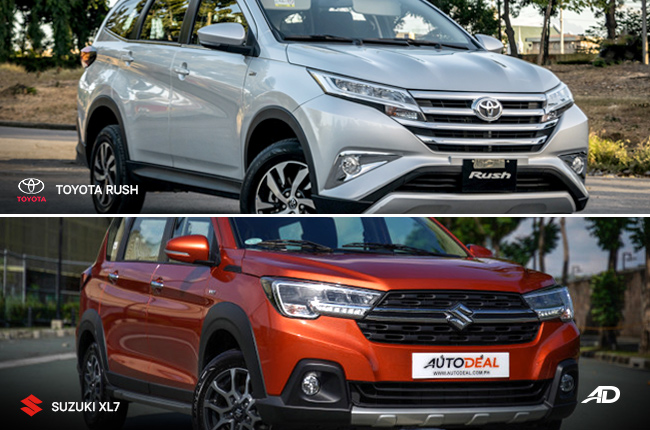 When it comes to appearances both vehicles have taken on a similar design path. Both the Toyota Rush and Suzuki XL7 have been designed with SUV-looks as their main theme. This is evident in their imposing front face along with their prominent fenders and body cladding on the side. Further still, the SUV-like appeal can also be seen in the ground clearance of both vehicles. The Toyota Rush has the upper hand as it has 220mm clearance between the lowest point on its chassis and the ground. The XL7, on the other hand, only has 200mm worth of ground clearance, which is about average for the segment.

More similarities between the two continue as we take a look at their lighting elements. Both the Rush and the XL7 can be had with LED headlights, LED taillights, and LED daytime running lights. This puts them about equal in terms of lighting equipment without considering the throw and proper cut-off of their respective lighting systems. 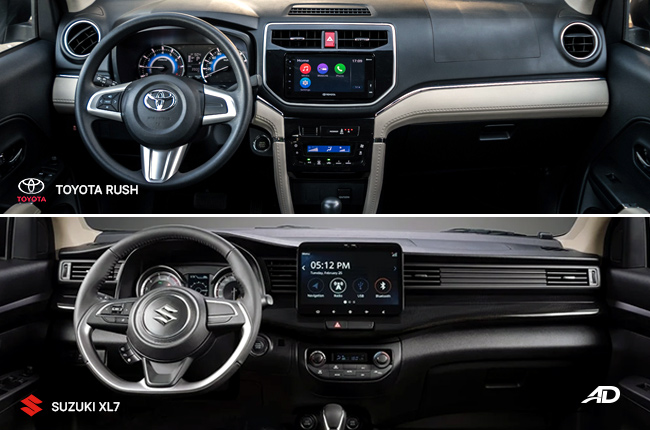 On the inside, this is where the design choices deviate from one another. The Toyota Rush goes with a light interior. It comes with black being the primary color for the cabin, with gray being chosen for the headliner, and beige being utilized as the accent color for the door sidings and dashboard. Material choices for the rush also lean more towards the durable as hard plastics are present and are used well in high traffic areas.

Cabin feature-wise, the Toyota Rush comes with a 7-inch infotainment system with Weblink for smartphone mirroring. It also comes with a 6 or 8 speaker sound system depending on the variant chosen. Aux, USB, and Bluetooth connectivity are also standard for variants on the Rush.

The Suzuki XL7, on the other hand, comes with a black cabin, with black being used as the primary color and beige being used as the headliner color. The dashboard of the XL7 comes with a flatter design than that of its Toyota counterpart. The look is straightforward with only a few piano black plastics being used to accent the cabin with some very convincing faux carbon fiber accent pieces. Similar to the Rush, material choices are leaning more to the side of durability rather than comfort, which is to be expected at this price point. What the Suzuki XL7 has over the Rush, however, is its much bigger 10-inch infotainment system that comes with Apple CarPlay and Android Auto. This unit also has AUX, Bluetooth, and USB connectivity as well. As far as sound systems go, the Suzuki 7-seater is only available with a 6-speaker system, which puts it about even with the lower variants of the Rush. 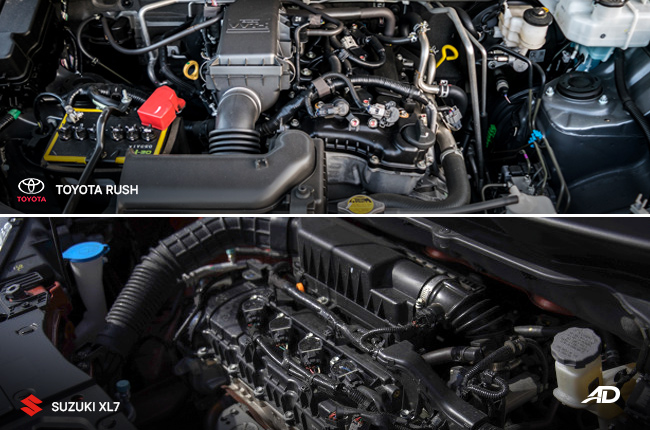 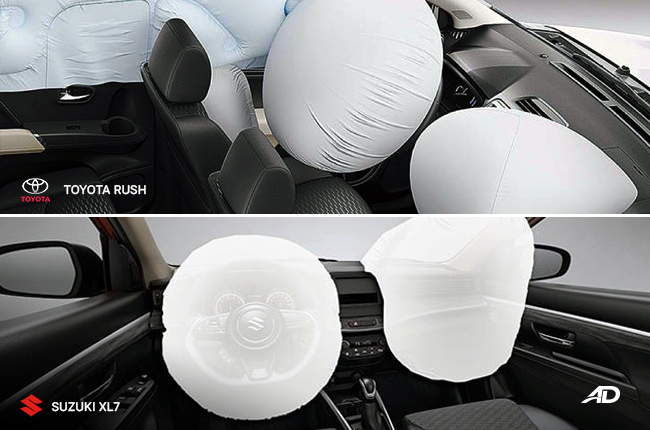 The Toyota Rush has the edge as it comes with more airbags as standard. It is equipped with driver and passenger front airbags as well as curtain shield airbags. The Suzuki XL7, on the other hand, only comes with front airbags for the driver and front passenger.  It does, however, boast a 5-star ASEAN NCAP crash test safety rating, making it one of the safer vehicles available on the market today.

Furthermore, the Toyota SUV comes with traction control, a back sonar for all models, an emergency stop signal, and a back monitor for the 1.5 G variant. The Suzuki MPV, on the other hand, comes with an electronic stability program, hill hold control, reverse parking sensors, reverse camera, and a pedestrian injury mitigation body. As of publishing this article, the Suzuki XL7 has yet to be given an ASEAN NCAP crash safety rating. Standard safety features between the two models include ABS with EBD, ISOFIX tethers, and 3-point seatbelts for all occupants. 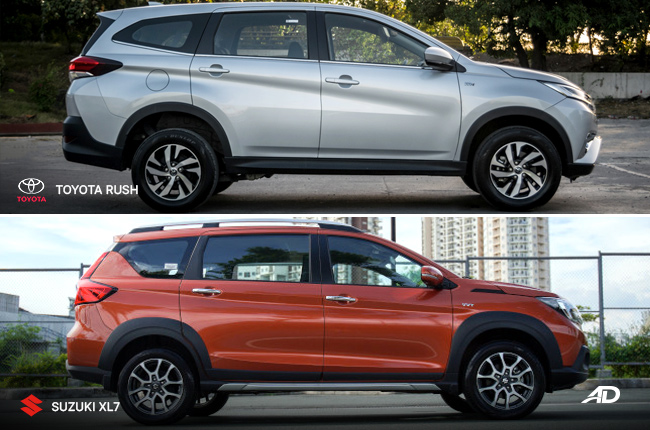 Where pricing is concerned both the Toyota rush comes out as the more affordable vehicle thanks to its many variants. It has a price range of between P968,000 to P1,100,000 giving it the ability to fit within a tighter budget. It is important to note that the more affordable Toyota Rush 1.5 E was a 5-seater, however, Toyota Philippines has given an upgrade and now comes with 7-seats as standard.

The Suzuki XL7, on the other hand, only comes available with a single variant which is priced at P1,068,000 making it the more affordable option between it and the higher variant of its Toyota counterpart. If you want to know more about the price list of the Toyota Rush or about the price list of the Suzuki XL7 you can head to our website for more information. If any of these two vehicles strikes your fancy, then we highly recommend using our Buy Online function to make the process of acquiring your dream vehicle go as smoothly and as easily as possible.

While both vehicles are pretty even with one another, we still have to award a winner in this head to head. Thanks to its more powerful engine and with the features that it brings to the table the Suzuki XL7 wins. Having that extra 1hp and 8 Nm of torque can make all the difference especially if you plan to utilize all 7-seats regularly and if you plan to use it to haul light cargo items. While it is the more expensive vehicle out of the two, as it only comes with a single variant you already get a lot to justify the price. It also comes with Apple CarPlay and Android Auto as standard which gives it an advantage over its Toyota rival especially during these high technology times.