We came, we saw, and we conquered the lahar fields and dry river beds at the foot of Mount Pinatubo with the recently launched Nissan Terra. The Philippines is extremely lucky with this midsize SUV as we will be the first country in the region of Southeast Asia and Oceania to receive our allocation, with customers able to pre-order the SUV as of this writing. Even luckier is the fact that we got to officially drive the seven-seater Terra before anyone else in the world. By no means a full review, think of it as a taste of good things to come for such a competitive market While the Terra may be a long time coming, the excitement and anticipation to get behind the wheel of Nissan’s contender to take on the other big five was very high indeed. We got the chance to drive the Terra through a highway section, then on to some hill climbing and water wading adventures. Let’s get down to the meat of it all.

The Terra retains the same 2.5-liter turbo Diesel engine for the Navarra, and that’s not a bad thing at all. At 190 hp and 450 Nm of torque, acceleration and highway speeds are easily achieved with little effort. Our quick blast from Clark to the off road section proved to be a piece of cake for the Terra. High speed turns and on ramps were handled very well, much in part to the heavily tuned five-link suspension taken from the Navarra. It feels solid and stable, much more so when fully loaded. The seven-speed automatic transmission shifted nicely, with no noticeable gear changes throughout the drive. 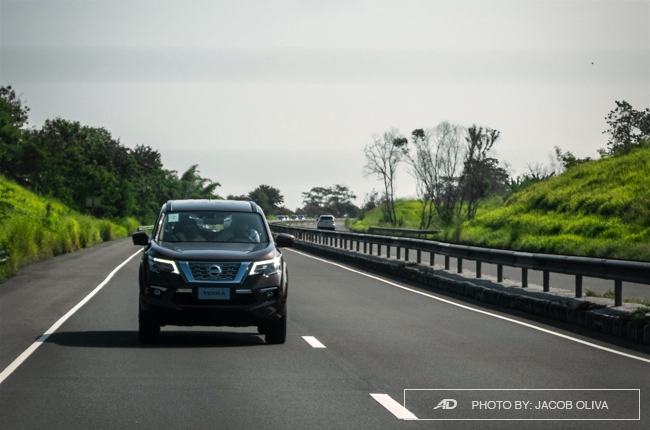 Braking and accelerating hard didn’t upset the chassis at all, as diving was very minimal. It’s a tight package for on road duties, and would make a good suburban runabout and city SUV. Extra points for the comfortable seats and easy to use climate controls which make long drives a breeze. Ride comfort is high and NVH is handled extremely well, dare I say at par, if not better than the top sellers. Make no mistake as body roll is almost impossible to mitigate in a midsize SUV, but the Terra performs admirably, and could edge out competitors. The highway portion also highlighted the safety features on the Terra. All part of Nissan’s Intelligent Mobility Suite, there’s blind spot monitoring, audible lane departure warning, and the smart rear view camera. What’s nifty about this class-only feature is that it gets rid of obstructions to the rear view when driving. All you get is a clear and wide view of the road behind. Take note that you can also adjust the angle and positioning of the digital view, as well as dim or increase brightness as you see fit. It takes some getting used to, especially since I’m used to seeing my passengers and rear of my vehicle when glancing at the rear mirror.

We exited at Porac off of SCTEX and entered a private road leading up to the Sandbox, a 4x4 playground among the remnants of the Pinatubo eruption in 1991. That means a mixture of fine sand and, when mixed with water, a glue like substance that can trap vehicles that aren’t careful. Before we got to the sticky stuff, we had to navigate a tight set of trails and rocky ups and downs. The Terra has a trick up its sleeve for those tackling narrow trails in the form of a 360 degree around view monitor. Displayed on the smart rear view mirror, it provides a virtual picture of what’s around and directly in front or behind of your vehicle, courtesy of 4 cameras. The view can be adjusted to also show what’s directly beneath the right passenger side of the vehicle, making scuffing your wheels and step board a thing of the past.

The torque of the Terra makes quick work of light boulder climbing and rut navigation. The hill descent control is there to keep things at a good pace and keep the driver focused on steering. You’ll also find that the multifunction display in the middle of the instrument cluster offers up some handy information such as departure angles, a gyroscope, which wheels the engine is sending power to, as well as being able to adjust individual driving settings. A twist of the rotary four-wheel drive knob is all it takes to toggle between standard rear wheel drive and low/high four-wheel drive modes. I just wish it was angled more toward the driver or placed near the handbrake, as it’s oddly placed on the passenger side, limiting the view of the mode you are currently on. Even on high speed dirt tracks, the Terra absorbed holes and rocks impressively; there’s a good feeling of flex in the suspension, but none of the actual harshness was transferred to its passengers. No suspension crashing or bottoming out on the smallest of obstacles here, it was just momentum and smooth sailing.

Once we arrived at the beginning of the riverbed, it was time to switch to four-wheel drive low. We needed to maintain a steady pace to prevent sinking into the wet ground, and were told to maintain a 30 km/h speed during open portions. The Terra, with its light steering and good feedback, was easy to maneuver despite the slippery surface. Some sliding was expected, but a quick correction of the wheel is all it takes to adjust course. The Terra felt planted and instilled confidence despite the ground conditions, and not a single vehicle in the convoy had to stop to let our marshals take over. While we were told that the water could get higher, the class-leading ground clearance (225mm) of the Terra was more than enough to handle the terrain. We climbed over wet river edges and soil without issue, and the splashes of water brought out our inner rally drivers. The fact that we also didn’t get to play with the 100% differential lock at any time during the drive could be a good thing, as the opportunity to use it never presented itself. There’s a lot to like about the Nissan Terra, and we certainly were surprised by what it had to offer. On what we’ve experienced so far, the overall package is a solid one, and the price and technology combination is very good, indeed. Performance is great on paper, and, in the real world, more than enough for what most consumers will be using this kind of vehicle for. The Nissan Terra drives well in almost any condition, and, by the few hours we had with it, is a solid choice for those looking at getting a midsize SUV soon. We were too focused on driving to play around with the gadgets, such as the touchscreen and drop down display for rear passengers, but from what we could tell, the infotainment system also supports phone mirroring for Apple and Android. Of course, we’ll touch more on that in an in-depth review soon, so keep an eye out for that.