Sedans were once the king of the roads in the Philippines. Those days are long gone, but that doesn't mean we don't appreciate a good sedan when presented with one. Today we're putting forward not one but two subcompact sedans that have captured our interest since their release.

The Hyundai Reina and Mitsubishi Mirage G4 are two of the more popular picks in their segment. These vehicles are practical, fuel-efficient, and relatively affordable. Both have their respective pros and cons, so which one should you choose? We aim to answer that question in this Head to Head. 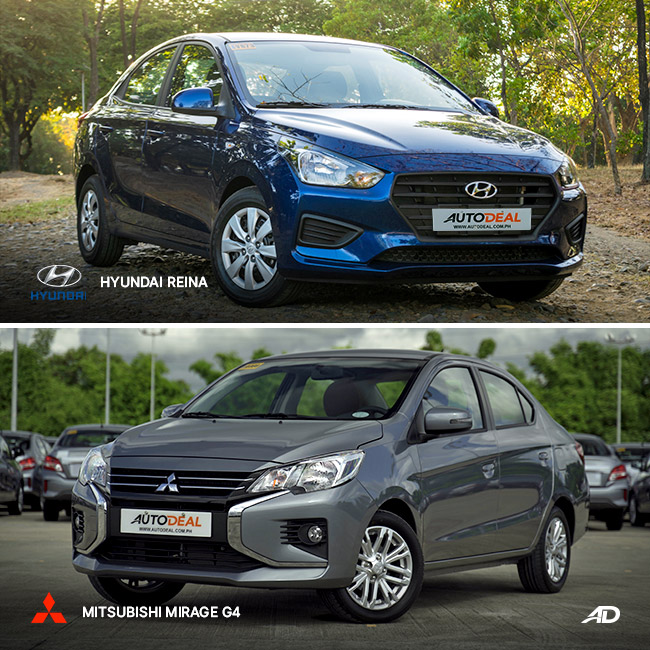 Sedan design has come a long way. These days, many subcompacts feature handsome looks that make them appear larger and more appealing. Take the Hyundai Reina, for example.

When it was released locally in 2019, we praised the vehicle for its simple yet effective design. The front fascia features Hyundai's signature Fluidic Sculpture 2.0 design language. It has a sporty stance from the side, but the rear doesn't do the car any favors. The back looks a bit uninspired compared to the rest of the vehicle. It also gets halogen lighting all around, 14-inch steel rims, and disc brakes at the front.

As for the Mitsubishi Mirage G4, it features a more recent design from 2021. The front packs the famous Dynamic Shield design. Mitsubishi did a commendable job revising the Mirage G4's overall looks, giving it an exterior design overhaul. The sides look more muscular, and you get repeaters on the side mirrors. It features halogen projector headlamps, 15-inch alloy wheels, and front disc brakes.

The Mitsubishi Mirage G4 looks much more designed, which could appeal to folks who want a unique vehicle. On the other hand, the Hyundai Reina keeps it simple through and through. Both have similar exterior features, so we think this category comes down to taste. For that reason, we're giving this category a tie. The differences get to be much starker when you step inside these vehicles. The Hyundai Reina's interior isn't bad, but it looks a little dated. It features a straightforward horizontal dashboard lined with satin chrome trim. The steering wheel is polyurethane, and there's no touchscreen display to be found. You do get power windows, a 2.8-inch monochrome driver's display, and a control cluster with nice ergonomics. The rear will sit two people comfortably, but three may be pushing it. As for onboard tech, the Reina packs a lackluster 3.5-inch 1-din radio and a single USB port. Some variants come with an upgraded head unit with Apple CarPlay and Android Auto, but you'll have to pay a premium.

There's a lot more to talk about with the Mitsubishi Mirage G4's interior. The cabin looks refreshing with a mix of gloss-black plastics and touches of chrome. The instrument cluster has a carbon fiber design with red accents on the gauges. While the seats are fabric, they feature a new geometric design to spice things up. A leather-wrapped steering wheel is also available. The crowning jewel is a standard 7-inch touchscreen infotainment system with Apple CarPlay and Android Auto. Other standard tech features include Smart Phone Link Display Audio (SDA), a radio tuner, Bluetooth, and USB port connectivity.

As we mentioned, the Hyundai Reina doesn't have a bad interior, but it lags in tech features. That's understandable given its price point, which we'll get into later. For this category, however, there's a clear winner. The Mitsubishi Mirage G4 features a more sophisticated interior with modern tech features. So, we're giving it the point. There's not much to discuss with these vehicles in terms of active safety features. The Hyundai Reina comes equipped with dual SRS airbags and an anti-lock braking system (ABS).

The Mitsubishi Mirage G4 also gets dual SRS airbags, but ABS is limited to the higher trim levels. The GLS variants also get the welcome additions of a Brake Override System and ISOFIX anchors.

Both vehicles get the essential safety features, but the Mirage G4 pulls away with slightly better braking functions and child safety. The Hyundai Reina features a 1.4-liter naturally aspirated gasoline engine that makes 94 hp at 6,000 RPM and 132 Nm of torque at 4,000 RPM. The power figure is surprisingly good on the Hyundai, and both a 5-speed manual and 4-speed automatic gearbox are available.

Meanwhile, the Mitsubishi Mirage G4 packs a 1.2-liter MIVEC gasoline engine that delivers 76.4 hp at 6,000 RPM and 100 Nm of torque at 4,000 RPM. Gearbox options include a 5-speed manual transmission and a continuously variable transmission (CVT).

Both power plants peak at similar points, but the Reina runs away with it, having 17 more horses and a torquier engine. While the Reina and Mirage G4 are similar-looking subcompact sedans with comparable features, their price difference is more pronounced. The Reina starts at P683,000 for the 1.4 GL MT model. Its price goes up to P783,000 for the 1.4 GL AT variant with the upgraded head unit.

You can get the top trim level of the Hyundai Reina for less than the base model Mirage G4, and you'll still have money to spare. The Reina is significantly more affordable, so it gets the point here. Both the Hyundai Reina and Mitsubishi Mirage G4 are formidable models in the subcompact sedan segment. It's challenging to pick a winner here, as both perform best in different aspects.

It's all about finding out what you prioritize. If you're looking for a straight-to-the-point ride with timeless looks and a punchy engine, you can't go wrong with the Reina. However, if you want a more modern design, a more premium interior, and the latest standard tech features, the Mirage G4 is the choice for you.