It's an open secret that Mazda and Isuzu have partnered up with one another to release a whole new set of vehicles. Such is the case between the Isuzu D-MAX and its recently launched sibling the Mazda BT-50. While each automaker has done its best to differentiate each pickup truck from one another, there is no denying the similarities between the two.

Isuzu has gone for a more utilitarian look and feels for the D-MAX as seen in its variant lineup or more rugged and workhorse-oriented variant lineup, while Mazda has chosen to go with a more elegant design aimed at the lifestyle area of the pickup truck segment. With both vehicles coming from the same platform and sharing the same parts, we put them head to head to see which one will come out on top as the better pickup truck. 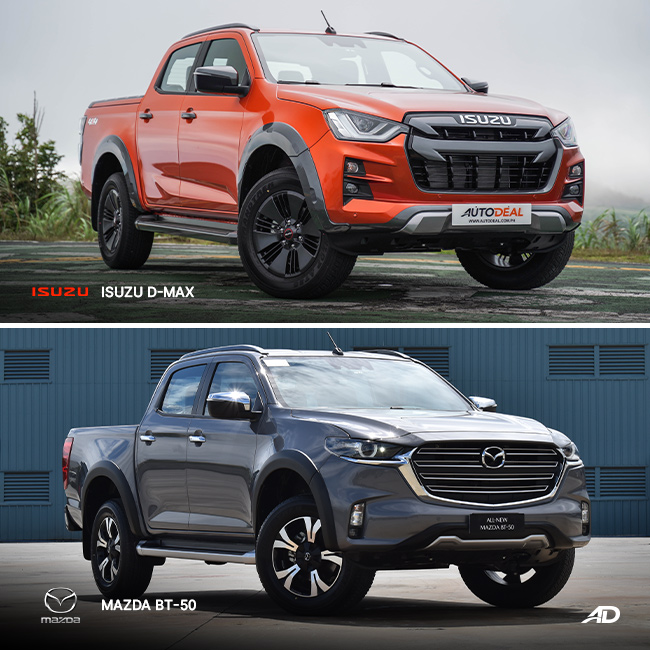 Starting with the exterior, it's evident that Isuzu and Mazda took two different approaches when it came to designing their pickup truck. Isuzu stuck to its guns and went with a more aggressive and tougher-looking design with the D-MAX. This is evident in the more aggressive lines in the front fascia of the pickup truck along with the more prominent body cladding. Mazda, on the other hand, went with a more subtle design and stuck with its KODO design roots as the BT-50 looks similar to its large crossover lineup of vehicles such as the CX-8 and CX-9.

In terms of equipment, both vehicles are on par with one another as they can be had with LED projector headlights that are paired with LED daytime running lights. It is important to note, however, that the utilitarian variants of the D-MAX, come with halogen headlights, while the lower variants of the BT-50 only have halogen projectors.

With that said, and as both vehicles are very similar it ultimately boils down to your personal preference when it comes to their styling. If you love the more elegant look of the BT-50 then it's the better option among the two. However, if you want something that looks a little bit tougher and more aggressive then you won’t go wrong with the D-MAX. 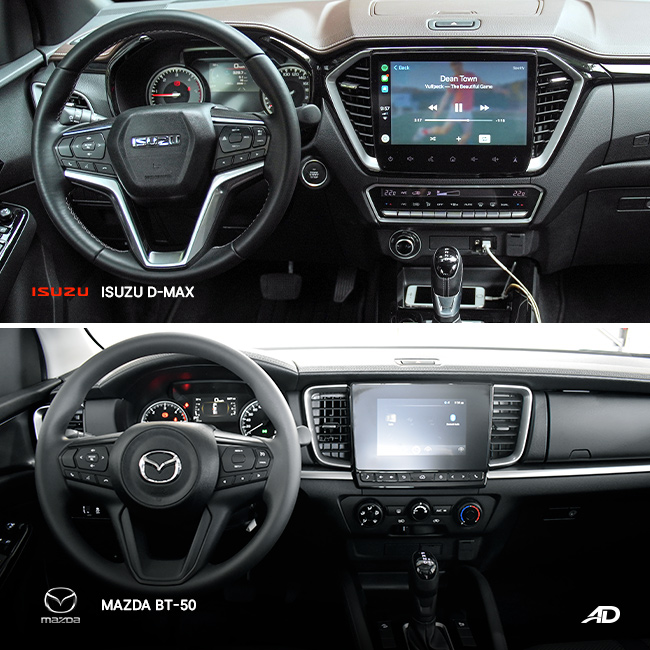 As the BT-50 is based on the Isuzu D-MAX expect the two vehicles to share a couple of interior bits and pieces. The D-MAX comes with a much more dynamic dashboard as there is a cowl that forms on top of the infotainment system. The BT-50 on the other hand gets a much flatter dashboard and loses out on the storage compartment found on top of the dashboard of its Isuzu sibling. The air vents are more angular in the Isuzu pickup truck, while the Mazda opts for a much more rounded-off look. While the Isuzu D-MAX does come with a bigger screen size for its infotainment system, the BT-50 comes equipped with Apple CarPlay and Android Auto as standard for all models in its lineup. With that said, we award the win to the Mazda pickup truck as it gives you more standard features throughout its model lineup. In terms of safety, both vehicles are equally matched. They can be had with a full suite of 7 airbags for their higher models, while dual airbags are standard for the entry-level variants. Aside from this ABS and EBD are also available throughout the model range as well. Since both the BT-50 and D-MAX are essentially twins, they also share the same Advanced Driver Assist System. This gives both pickup trucks access to such features as blind-spot monitoring, lane departure warning, autonomous emergency braking, adaptive cruise control, and forward-collision warning just to name a few.

With both vehicles having the same safety features this category ends in a tie. 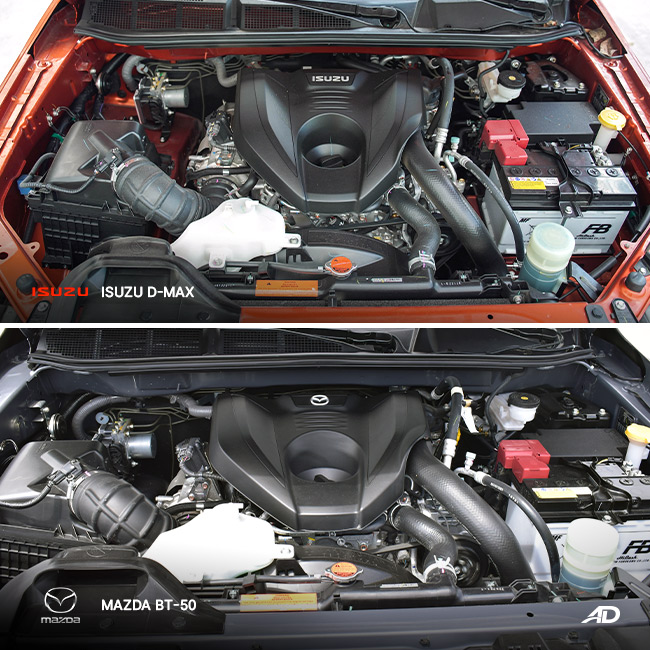 Under the hood, both the Isuzu D-MAX and its twin the Mazda BT-50 are powered by a 3.0-liter turbo diesel engine that produces 187 hp and 450 Nm of torque. They both shift via either a 6-speed manual or a 6-speed automatic transmission that sends power to either the rear wheels or to all four. However, the D-MAX does come with a second engine option in the form of its 1.9-liter turbo diesel engine. This small-displacement engine produces 148hp and 350 Nm of torque. Like its bigger 3.0-liter counterpart, it too can be had with either a 6-speed manual or automatic transmission.

While both vehicles share the same 3.0-liter engine it is important to remember that the BT-50 comes with a rear differential locker, however, it comes with drum brakes at the rear.

Since both pickup trucks are available with the 3.0-liter turbo diesel engine we will give this category a tie as the 3.0-liter from Isuzu has been known to produce great performance while balancing good fuel economy as well. 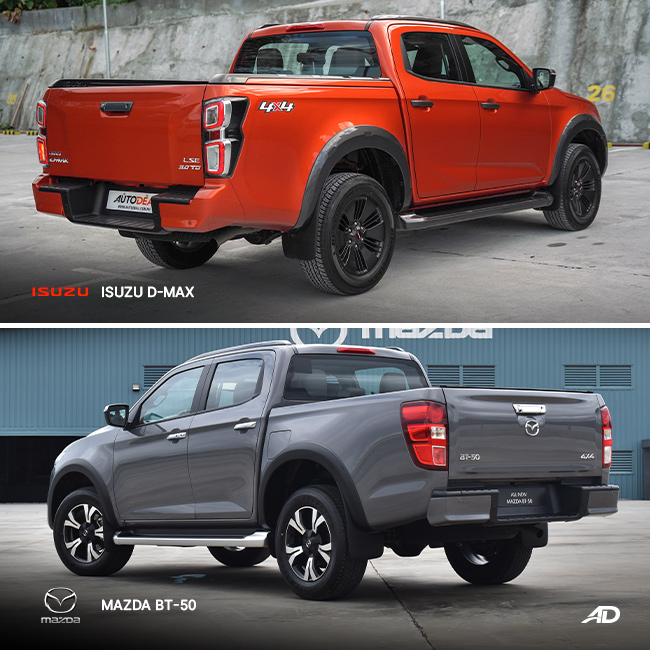 Here is where things can get tricky between the two vehicles. The D-MAX’s price range includes more utilitarian-focused models, while the BT-50 goes with a more lifestyle-oriented lineup. The Isuzu pickup truck at its most affordable can be had for P987,000 for its entry-level 1.9-liter 4x2 LT MT variant, while at its most expensive it can be had for P1,825,000 for its 3.0 4x4 LS-E AT model.

As mentioned earlier, the Mazda BT-50 takes a different approach to its pricing as its lineup of models is more geared towards the lifestyle segment of the market. With that said, at its most affordable it can be had for P1,390,000, while at its most expensive it can be had for P1,790,000. Making it the more expensive vehicle to choose from. This makes it the more affordable pickup truck to choose if you compare the 3.0-liter variants between both models.

With that said the Isuzu D-Max wins this category as it offers a wider range of models to its customers. However, we can’t deny that when it comes to the lifestyle segment, the Mazda BT-50 has its Isuzu sibling beat when it comes to price, especially since it is available with the 3.0-liter engine right off the bat.

Since both vehicles are similarly equipped with each aimed at a different segment of the pickup truck market choosing between the two ultimately depends on your personal preference. The Isuzu D-MAX offers you a more comprehensive range of pickup trucks to choose from, whether it be for business or lifestyle, the automaker has got you covered. While some of these models may be bare in terms of features, they still fulfill the utilitarian purpose of being a pickup truck.

In the case of the Mazda BT-50, it aims for a more lifestyle-oriented segment. This means that its models are better equipped and come with a more premium feel. This is also where the Mazda pickup truck excels as it is more competitively priced compared to its Isuzu sibling making it the more attractive option especially as it comes with the 3.0-liter as standard for all of its variants.