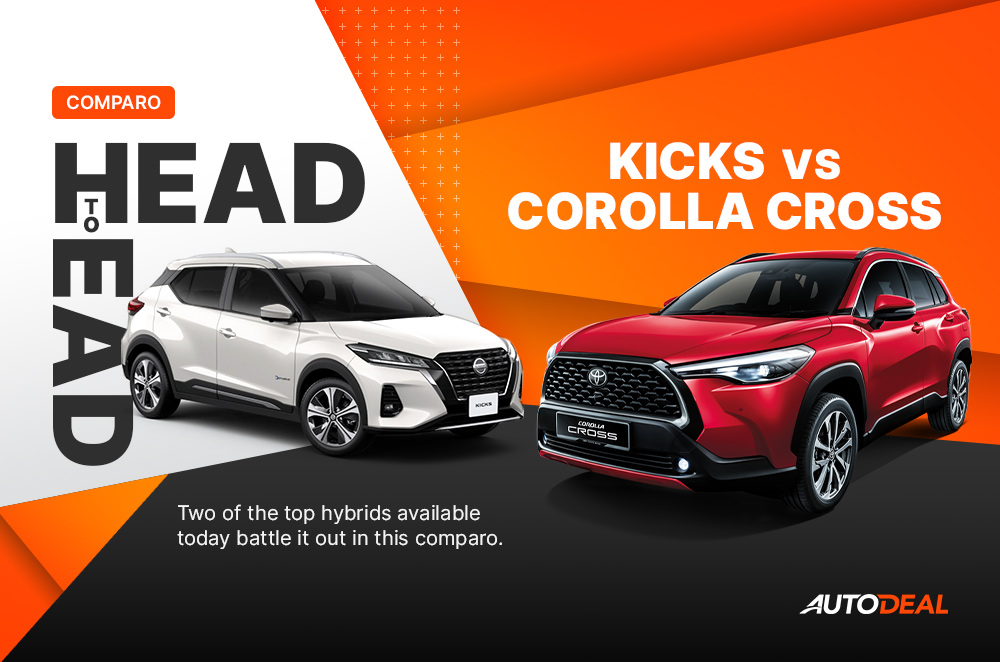 Are hybrid-electric cars finally taking hold in the Philippines? It sure seems that way. With the launch of models like the Nissan Kicks and Toyota Corolla Cross, the local market has been getting a healthy dose of electrified vehicles.

If you’re looking for your first or next hybrid car, there are few models more compelling than the Kicks and Corolla Cross. Choosing between them, however, can be a tall order. We’re here to help you find out which among these vehicles are worth buying. 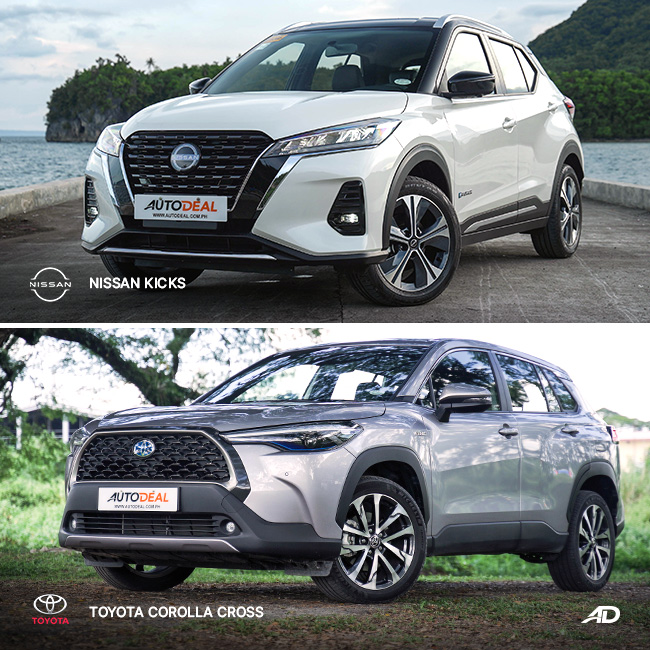 For this comparo, we’ll be putting the top-spec Nissan Kicks VL model against the mid-range Corolla Cross 1.8 V variant. As you’ll learn much later, these models are closest together in price. So, let’s start with exterior looks and design.

At first glance, the Nissan spirit is readily apparent with the Kicks. While it’s not as radical as the locally extinct Juke, the Kicks’ profile still screams Nissan anywhere you look. The proportional V-motion grille is flanked by LED headlights, LED DRLs, and LED front fog lamps. The rear also gets sleek wraparound LED taillights. Other notable equipment include 17-inch alloy wheels, an integrated rear spoiler, a shark’s fin antenna, power folding mirrors, and a power tailgate.

Meanwhile, the Toyota Corolla Cross features a more muted look that could appeal to a wider customer base. It’s not Toyota’s best-looking vehicle by any stretch of the imagination, but for what it is, it gets the job done. The Corolla Cross features Bi-beam LED headlights, LED DRLs, LED front fog lamps, and LED taillights. Completing the features list are 18-inch alloy wheels, power folding mirrors, and rain-sensing wipers. The lack of a power tailgate is apparent for this model and could disappoint many prospective buyers. 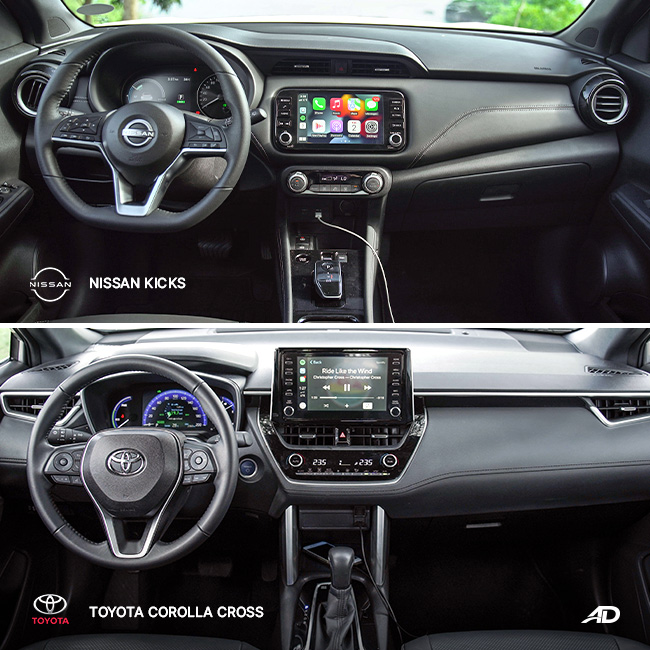 Let’s move on to the interior and tech features. The Nissan Kicks’ cabin won’t wow you right ouf of the gate, but its minimalist design and ample feature set are more than enough to make this vehicle competitive. There’s a nice mix of hard and soft-touch material that balances out the cabin quite well.

As for the Corolla Cross, it has a slightly more plush interior with leather seats and a spacious cabin. It comes with an 8-way power-adjustable driver’s seat, 60/40 split folding rear seats, a leather steering wheel with button controls, and two rear USB ports. There’s also an 8-inch touchscreen with Bluetooth, Apple CarPlay, and Android Auto along with a 7-inch TFT multi-information display. More than that, there’s six speakers, smart entry, push-start ignition, and dual-zone climate control.

The Nissan Kicks and Toyota Corolla Cross are both packing serious tech inside, but it appears the latter pulls ahead with better features overall. 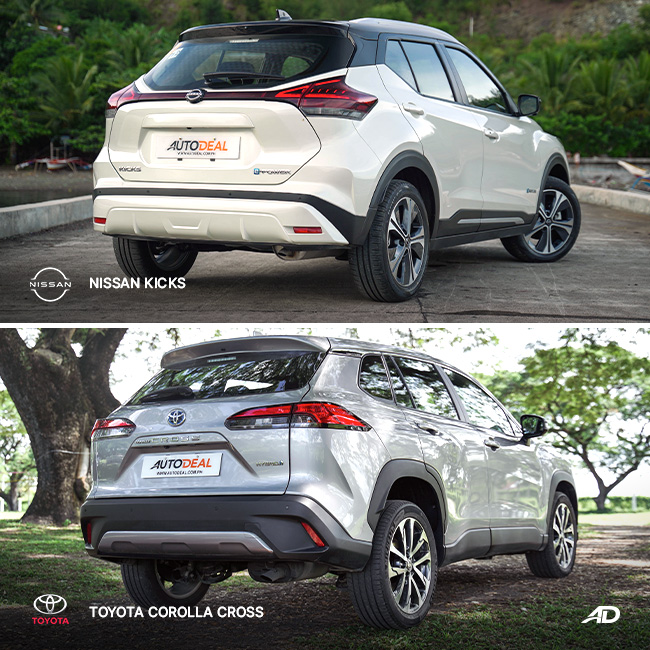 Cutting-edge safety features are becoming a must-have for today’s car buyers. To that end, the Nissan Kicks VL comes with driver, front passenger, and side curtain airbags. It also comes with ABS with EBD, vehicle dynamic control, and an engine immobilizer.

On the other hand, the Toyota Corolla Cross 1.8 V comes with its own list of formidable safety features. These include airbags for the driver, front passenger, side, curtain shield, and knees. Other safety features include ABS with EBD, vehicle stability control, hill-start assist control, a reverse camera, six sonar sensors, and Toyota Vehicle Security System. Oh, and there’s also a blind spot monitor with rear cross traffic alert.

As we’ve seen, both vehicles come with a veritable list of safety features. Each has something the other doesn’t, like an around view monitor on the Kicks and adaptive cruise control on the Corolla Cross. Still, with more airbags and more safety features overall, we have to award the point to the Toyota Corolla Cross. 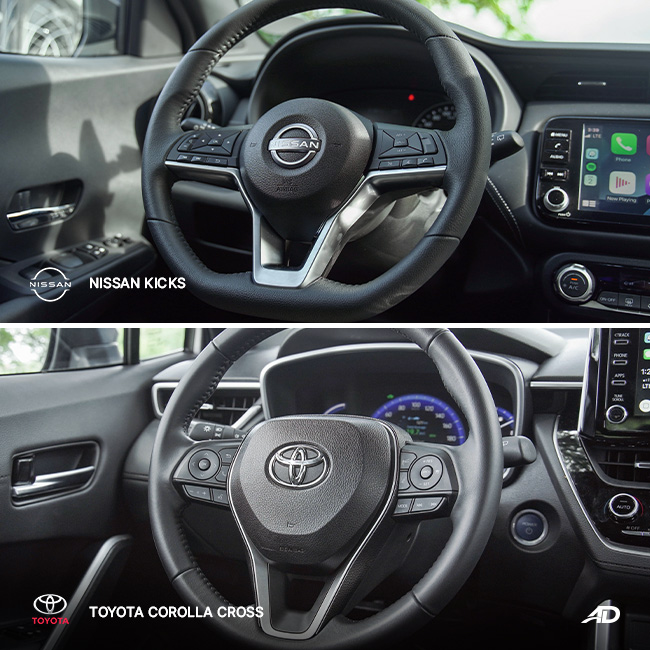 We’ve reached the stars of the show. As both the Nissan Kicks and Toyota Corolla Cross are two of the few hybrid-electric vehicles currently available in the Philippines today, they’re in direct competition with each other, even as they compete in different segments.

The Kicks features Nissan’s e-POWER technology. It’s essentially a series hybrid system that uses a 1.2-liter three-cylinder engine, a LEAF-derived EM57 electric motor, and a small battery pack. The Kicks requires regular gas top-ups, but only the electric motor drives the vehicle. This means instantaneous torque and a relatively quiet ride. The hybrid system punches out 136 hp and a whopping 280 Nm of torque paired with a single-speed transmission.

Conversely, the Toyota Corolla cross comes equipped with a parallel hybrid system composed of a 1.8-liter, 4-cylinder, 2ZR-FXE gasoline engine with 98 hp and an electric motor generator that provides an additional 72 hp for a total system output of 122 hp. Maximum torque is rated at 142 Nm. It connects to a CVT. As a parallel hybrid system, the vehicle will alternate between electric drive and gasoline power depending on usage. There’s also an EV mode that you can activate with the push of a button.

While series hybrids are relatively uncommon these days, Nissan’s e-POWER proves they still have a place in the market. The Kicks puts out more power and torque than the Corolla Cross, and the all-electric drive system makes for a more attractive proposition than its competitor. 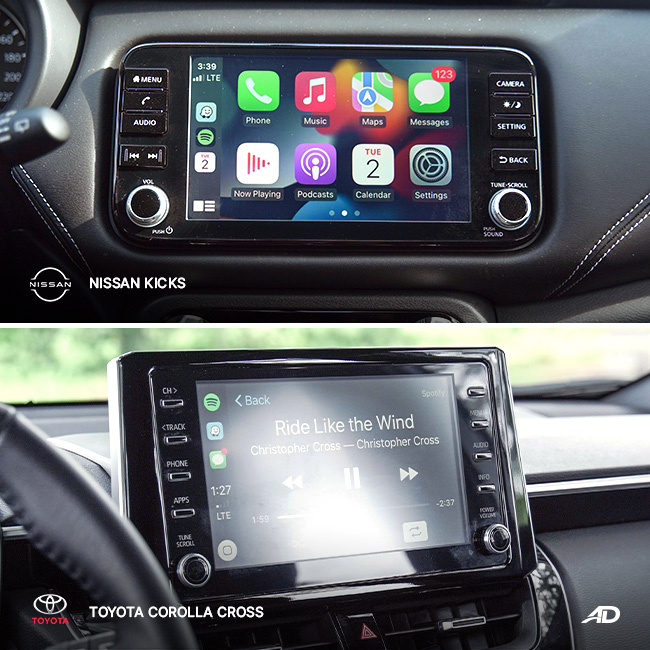 Nissan purposefully undercut Toyota when they priced the Kicks. The vehicle starts at a jaw-dropping P1,209,000 for the base EL model. The top-spec model, which we’re comparing here, is available for P1,509,000—a competitive price point no matter how you slice it.

That means you can get the top-spec Nissan Kicks VL for P156,000 less than the Toyota Corolla Cross 1.8 V. Even if we’re comparing the entire range, the Kicks still comes out as the more affordable option. It’s clear that Nissan wins this category. 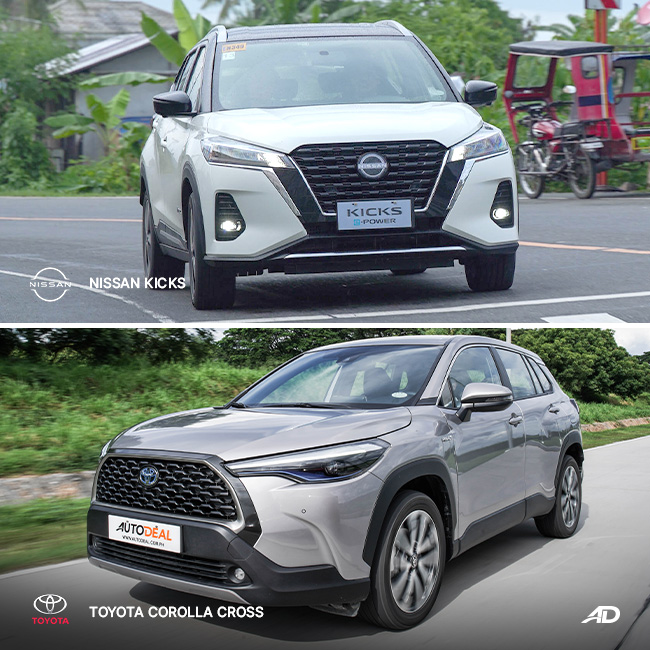 Nissan and Toyota deserve praise for bringing in electrified vehicles to the Philippines. Toyota struck first in terms of hybrids with the Corolla Cross, but Nissan isn’t that far behind at all. In fact, with the LEAF all-electric vehicle already in the market for a while, we’d argue that Nissan is actually the leading brand for EVs.

With the Kicks and its more attainable price point now available in the local market, Toyota should be wary of its competitor. Especially since it beats out the Corolla Cross in terms of looks, power, and overall pricing. The Corolla Cross is still worth a look if you want a bigger crossover with a better interior and more safety features. Still, it appears the Nissan Kicks wins this head to head.