To certain individuals, hatchbacks make a great case since there is space in such a compact package. Practicality is at the heart of a hatch, and these two have what it takes, but which of the two will be a better choice?

Two popular brands go head to head with their subcompact hatchback offerings in the Philippines. The Toyota Yaris and the Suzuki Swift are going up against each other in this comparison. While one is more known as a sedan, and the other is more fetching as a hatch, both have tried and tested nameplates, and both come from reputable brands, so which would give you more car for your hard-earned peso? Let’s find out. Both hatchbacks come updated from their respective manufacturers. Both units in their top of the line trim come with projector halogen headlamps and foglights and LED DRLs, as well as LED taillights with halogen bulbs.

The Toyota Yaris is a carbon copy of the Vios in the front. Slimmed headlights and taillights give the front and rear a distinct look. The vehicle rides on 15-inch silver alloys. While interesting to look at, are a little plain, especially when the exterior paint color is as loud as the Citrus Mica Metallic that the hatch can come in. All-in-all, the Yaris’ styling, is more conservative. Most of the quirky bits are at the front of the car. Dimensions-wise, the Yaris is noticeably longer coming in at 4,145mm in length. Its wheelbase is also longer coming in at 2,550mm.

Suzuki has hit the nail on the head with regard to the Swift’s styling. The headlights and taillights are swept up rather than to the side. The proportions on the swift are much more bulbous than the Yaris, which is more horizontal in its design direction.  It does look good and well proportioned, and that has something to do with the grille being functional and situated nicely between the headlights. The wheels are bigger, at 16 inches, and they add more dimension to the exterior thanks to its two-tone design. The Swift is smaller than the Yaris, but only in terms of its length and wheelbase, which measures at 3,840mm and 2,450mm respectively.

While exterior styling is subjective, the Swift does seem like the more stylish option since the Yaris is a little more polarizing in this regard. When it comes to dashboards, the Yaris has a familiar layout since it has the same design as found in the Vios. The Swift, on the other hand, is more stylized, and because Suzuki executes its hard plastics quite well, we’ll have to give the edge to the Swift in terms of feel alone. The Swift’s style extends to the steering wheel, which comes leather-wrapped D-shaped unit that’s in the GLX CVT trim level. The gauge cluster is more visually appealing and has more depth compared to Toyota’s tri-dial setup for the Yaris. The Yaris in its S CVT variant comes with paddle shifters, however, while the Swift GLX does not.

Taking a seat inside either of these subcompacts will result in ample room in the front, and in the rear. Space in both subcompacts is comparable, with enough head- and leg-room. Since both are comparable in this area, one has to wonder where Toyota’s extra length went. The answer to that can be found in the trunk. You can use the space as is, remove the lid for more vertical volume, or fold the seats to maximize the cargo-carrying capacity. You can do the same things in the Swift, but without the cavernous space with the rear seats up. Toyota and Suzuki offer similar connectivity options for their cars, with AUX, USB, and Bluetooth being standard for the top of the line variants. All variants of the Yaris come with a seven-inch touchscreen display LCD, while the Swift has an eight-inch touch screen unit in the high trim. Low-trim variants of the Swift will get a seven-inch touchscreen unit instead. In its highest trim, the Yaris can output its audio to a set of six speakers, while the GLX Swift makes do with four. Comparing the head units, the Swift does win when it comes to size, but it loses out on the number of speakers in the highest-end of the spectrum. 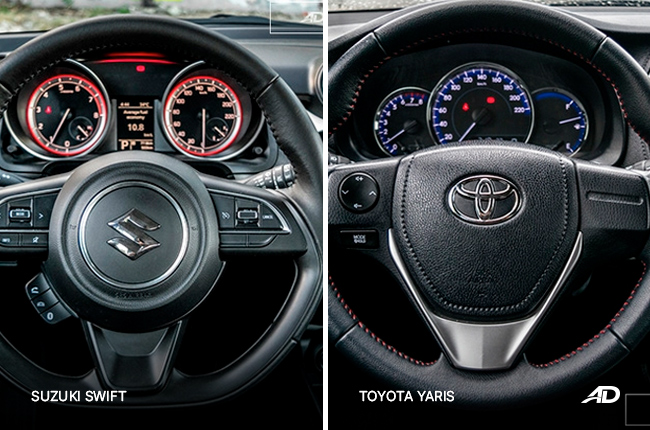 The Toyota Yaris dominates in this area. All models come with seven airbags which give occupants total protection just in case. The Swift only comes with two airbags for the driver and front passenger.

ABS comes standard with all units and the systems are tied in with electronic brake force distribution and brake assist. You get stability control on the Yaris, but not on the Swift. Without a doubt, the Yaris is the safer vehicle of the two, but the Swift holds its own enough since both nameplates are geared towards city driving. 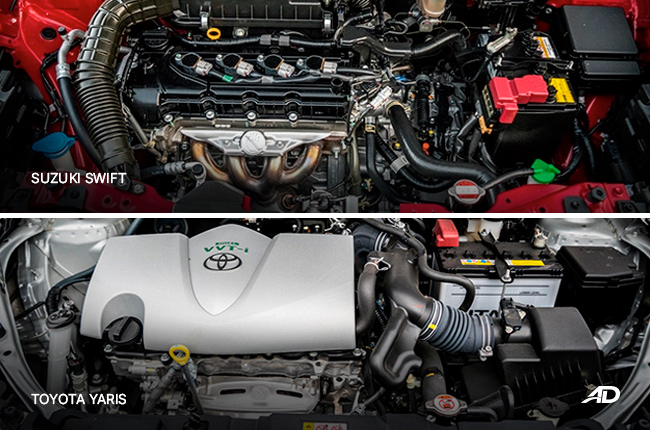 There are two powertrains on offer for the Toyota Yaris, a 1.3L and a 1.5L. The 1.3L produces 97 hp and 123 Nm of torque, while the bigger mill churns out 106 hp and 140 Nm of torque. Even at its base variant, the Toyota produces more horsepower than the Swift. The Suzuki only comes with one engine option, the 1.2L, 82 hp, and 113 Nm-capable motor. It does well in the city, but for overtakes, a heavier foot is required. The same can be said for the Yaris, even in its 1.5L trim level. It could boil down to weight since the Yaris does weigh more than the Swift.

Both engines can come paired to a five-speed manual transmission or CVT. Top trims will utilize a CVT, but the main difference between the Yaris and Swift is that the 1.5 S CVT trim of the Yaris gets paddle shifters that let drivers sift through seven simulated gears.

Steering for the two subcompacts are light, and in-cabin comfort for the two are comparable. Both cars have MacPherson struts in the front, and a torsion beam in the rear and both are reasonably pliant on bumpy roads. 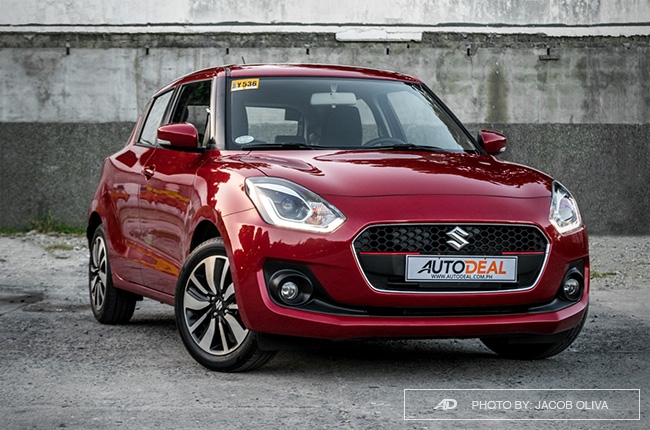 Both cars are compelling. The Toyota Yaris’ price starts where the Suzuki Swift’s ends. For the base 1.3L E MT, be prepared to fork over P890,000. The Swift meanwhile, will only cost you P899,000 for the top of the line GLX variant. You can get more affordable from there because you can opt for the GL MT variant for only P755,000. There is good value to be had with the Suzuki since you get more or less the same performance for day-to-day tasks even with the smaller, and more fuel-efficient engine. The Yaris costs P1,055,000 for the 1.5 S CVT variant, which makes it a hard recommendation especially for those looking to shop on a budget. 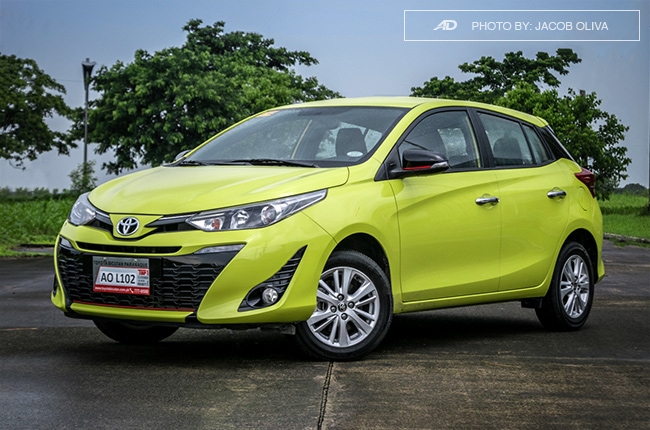 Though, if you have to make a case for the Yaris, it’ll have to be with regard to the premium speaker setup, cargo space, paddle shifters, and its more powerful 1.5L engine. A special mention would go to the safety systems that Toyota has instilled into all its variants. This could justify the price premium over the Swift. And did we mention that it’s a Toyota?