The Veloz is in a weird spot ever since Toyota separated it from the Avanza family of variants. It’s a little awkward now between the Avanza and the Veloz since the former top-spec valiant has left the nest and set out to become its own model.

We’re happy for the Veloz and its aspirations for the future. The Avanza has already got it going on in its own segment, so perhaps it is high time that the Veloz make a name for itself on its own. However, what does that mean for the Avanza? Did the Veloz step outside of the Avanza’s shadow, finally? 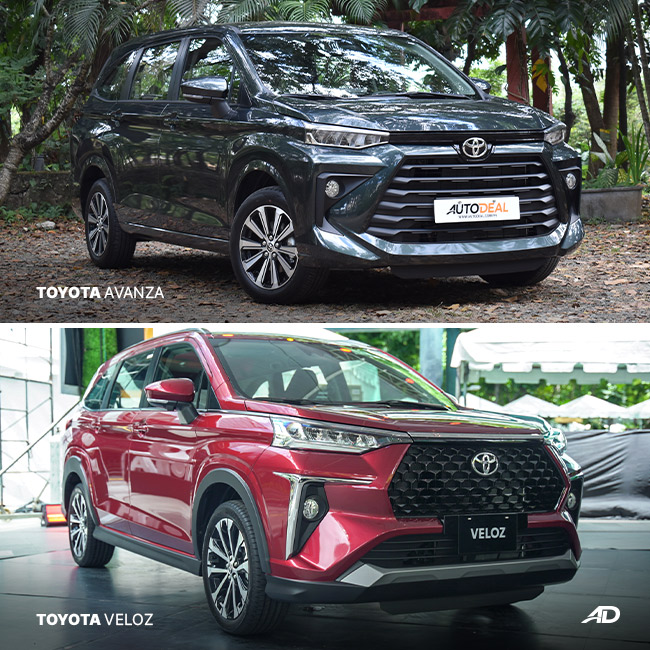 Even if they are based on the same chassis and platform, the Avanza and the Veloz are like fraternal twins instead of identical twins. Both of them are related, but one seems to like accessorizing more than the other while being kitted with a slightly different face.

Let’s start with the Avanza, it’s all-new for the 2022 model year, and Toyota even launched it separately from the Veloz. The chief difference between this model and the Veloz is the design of the front fascia and the snazziness of the rear. The front comes with a slat above the main intake grille, and the rear features separate taillights. Regardless of the difference, the Avanza still comes with LED headlights and taillights the Avanza doesn’t get the DRLs, however, and the foglamps are halogen instead of LED. On top of that, the wheel sizes top out at 16-inches for the Avanza, with lower-spec trims receiving a 15-inch set of alloys or steel wheels.

Meanwhile, the Veloz takes the same platform but dresses it up to look more like Toyota’s crossovers. The model has recently migrated over to the crossover classification on the brand’s website, and it looks like Toyota took a page out of the RAV4’s design to make the Veloz finally stand out from the Avanza. You still get LED head and taillights, but now with DRLs along with sequential LED turn signals. Its wheel size also grew to 17-inches and its wheels are also two-tone in finish. 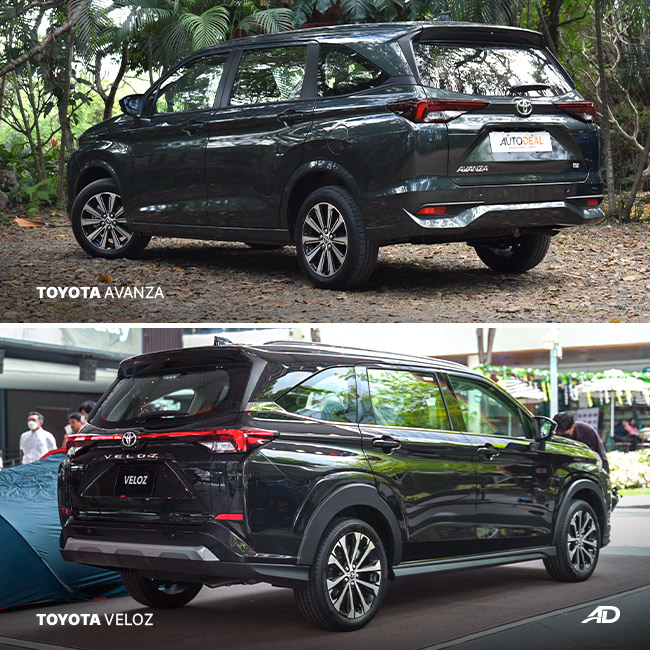 For the most part, the models are both similar and the less savvy car buyer could get confused between the two. Hands down, the Veloz wins in this category no matter how you cut it. It’s just better, but will it be good enough to justify the price difference? We shall see! 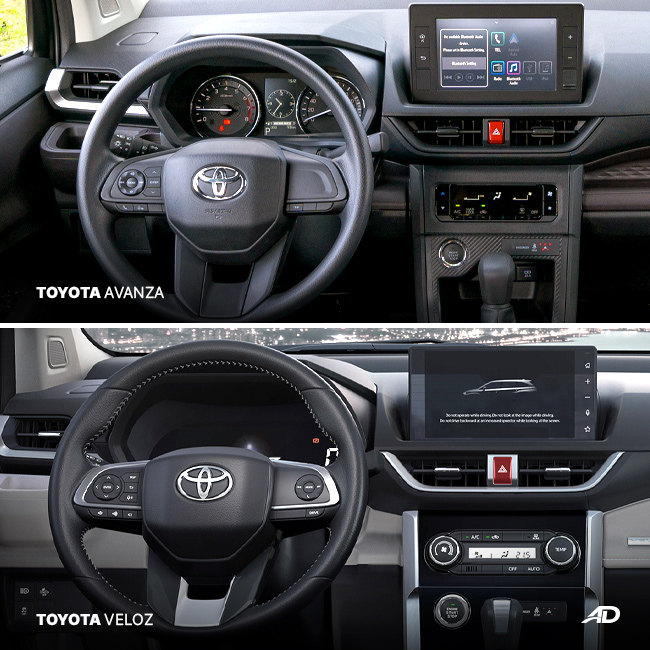 It’s a bit of a wash here. While the differences on the exterior are obvious for those in the know, the interior is a different story. The lines are a little blurred from a design standpoint, and it’s evident that the Veloz still is wholly related to the Avanza following the update.

Simpler is the word that you should use when comparing the Avanza’s cabin to the Veloz. There’s not a lot of fluff that gets in the way of driving, and there’s not a lot of padding compared to its higher-end sibling. Being categorized in the MPV segment, the interior is as expected, not too fancy but not too spartan either if you get the higher-end trims. The interior is predominantly clad in black plastics which are thankfully not glossy. The seats have a little flair to them being upholstered in patterned cloth with red accents. The gauge cluster gets a little fancy when you reach the G variant of the Avanza, as it gets a 4.2-inch TFT screen in the center of the two gauges. Climate control is also manual, which is to be expected given the price point of the Avanza.

If you go to the Veloz, meanwhile, the seats get leather inserts in addition to the cloth upholstery and the interior receives a black and beige color scheme along with marginally better materials. It’s not necessarily a jump, but rather a layer of gloss over the top of the base Avanza. Then you get to the gauges which ditch the mechanical stuff in favor of a 7-inch TFT display.

No contest again, the Veloz is better than the Avanza, big surprise! Jokes aside, either vehicle will be totally fine, and it will be your preference if you can or can’t live without all the extra touches. 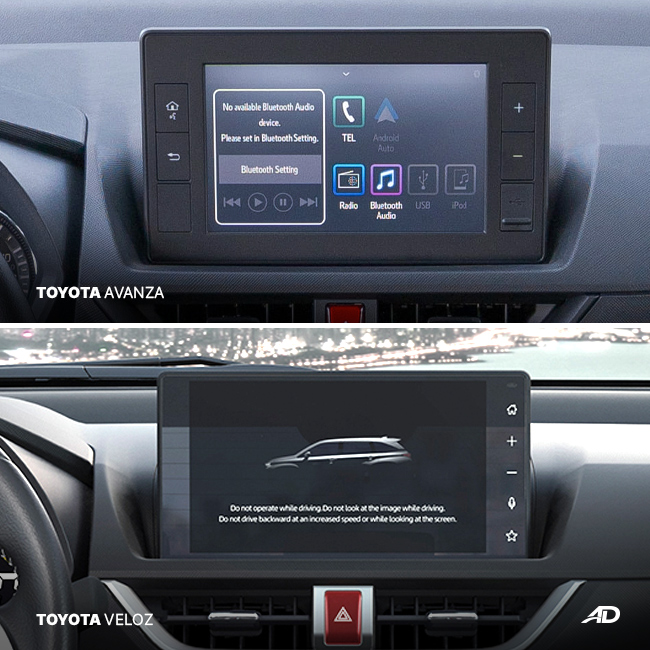 There is a slew of options available for the Avanza and the Veloz when talking about infotainment systems. The base Avanza comes with either a basic 6.75-inch Display Audio system or an 8-inch Display Audio system that has Apple CarPlay and Android Auto. Meanwhile, the Veloz has the 8-inch system as standard, but if you’re willing to splurge, the top trim gets a 9-inch unit with more features to boot.

The Avanza’s 8-inch system comes with a backup camera, Android Auto and Apple CarPlay, along with AM/FM, Bluetooth, and USB connectivity. The system then carries over to the base model of the Veloz but is quickly replaced by the 9-inch infotainment system at the top trim. The 9-inch unit in the Veloz can do everything that the 8-inch unit can, but adds a Panoramic View Monitor which gives the driver a bird’s eye view of their vehicle which is particularly helpful when parking. You also get a bump in speaker count once you upgrade to the Veloz making for a total of six. The Avanza only gets four regardless of the variant you get.

For driver-assist and safety features, the Avanza is basic at its entry-level and pretty good at its high-end. On the low end, expect only two airbags, ABS, stability control, traction control, and hill start assist. One variant higher gets you an alarm, immobilizer, backup camera, and rear parking sensors. The top-spec trim is what we would recommend if you were to get an Avanza because it comes with Blind Spot Monitoring, a cross-traffic alert system, and additional side, and curtain shield airbags making for a total of six. 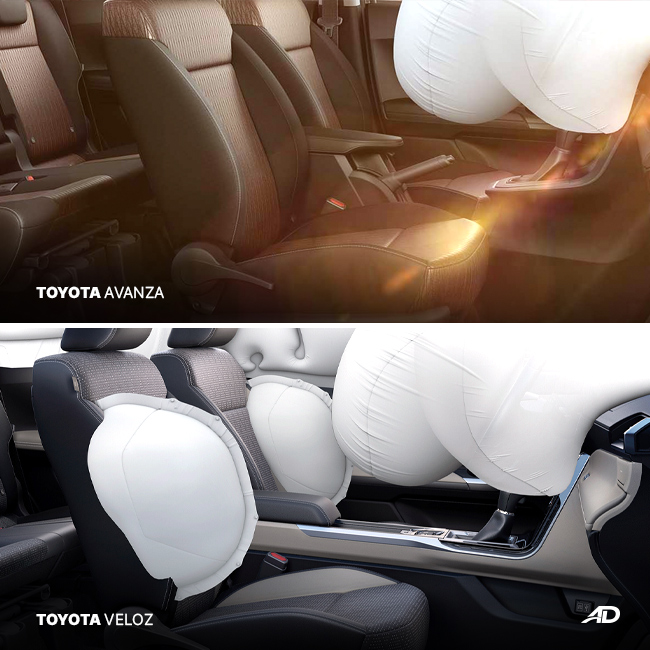 Then once you get to the Veloz, you get all of that in the base but even more features on the highest-end V variant. Toyota outfitted the top-spec Veloz with the Toyota Safety Sense package which includes a pre-collision system, automatic high beam, and lane departure alert features and also a panoramic view camera.

Should we spell it out? Alright. The Veloz is better. 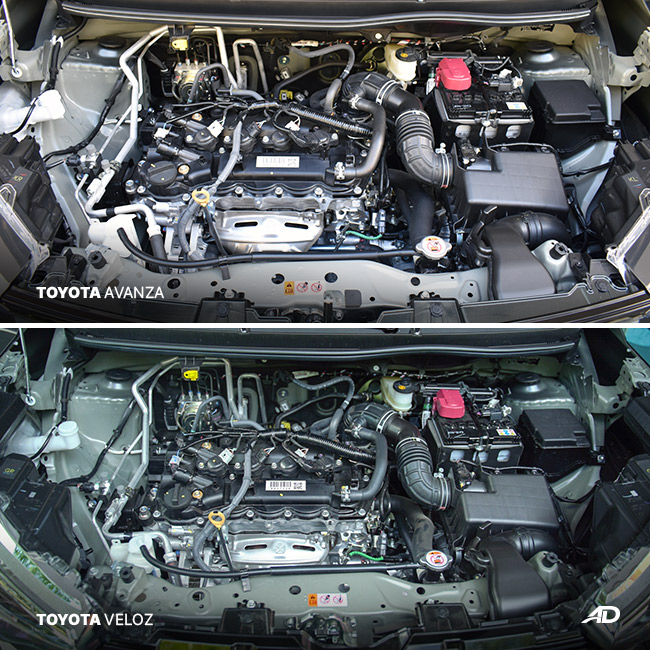 Considering that both of these engines are the same, it’s almost a tie. You can give points to the Avanza for giving consumers the option to size down their engine and save on a few thousands off their invoice upon purchase, however, so while both models have the same peak power perhaps it’s worth acknowledging that 1.3-liter for once. It’s a bit of a soft win for the Avanza in this regard but only because there are more options available in the lineup. 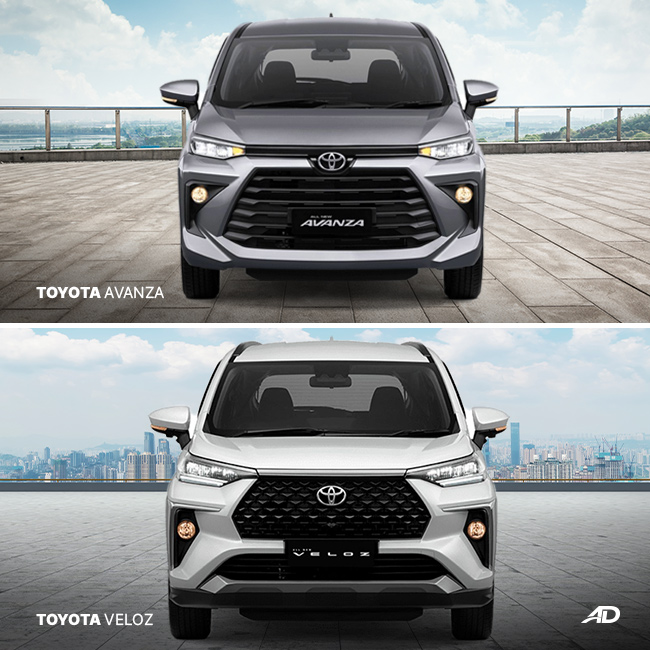 Okay, here’s where things get very interesting. Starting at just P928,000 for the J variant is a statement considering that you still get seven seats and a price tag that’s far away more affordable than the Veloz’s entry-level variant. As you go up the ladder, the G variant will go over the seven-digit mark and cost P1,039,000, but that’s still significantly cheaper than the G variant of the Veloz.

Now, the Veloz G comes in at P1,185,000 and tops out at P1,240,000 for the V variant with all the bells and whistles. Perhaps Toyota wanted to change up the name and classification of the Veloz so it doesn’t get lumped together with the Avanza in comparisons (oops). Anyway, looking at the two closely, we’ll see a gap of P146,000 which is no small chunk of change!

So let’s say you’re in the market for a seven-seater (sans the whole MPV vs crossover classification), and you take a look between the Veloz and the Avanza. If you really are on a budget, don’t mind the Avanza name, and are looking for something to be used more like a utility vehicle, then consider the G, E, or even J variants of the Avanza. The Veloz exists for those that want more, and the Avanza presents an extremely decent value for a compact MPV. However, is paying the extra P146,000 worth it considering that you get largely the same features and an exterior package? Probably not, and neither is paying P201,000 for the V variant. Although, if the Avanza/Veloz will be your only car and you love having a lot of features, then consider the Veloz in its top-spec trim. As long as you don’t mind paying extra, that is. Still, as it stands, the Avanza is lower-priced and still a great value. 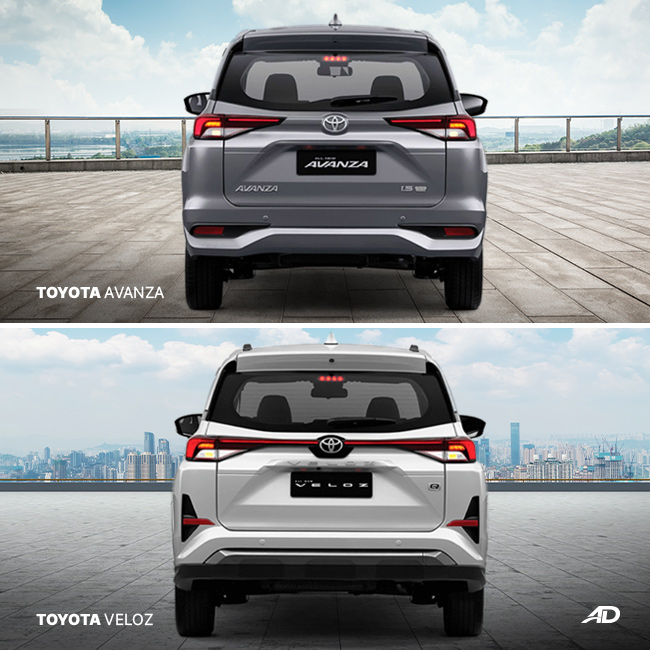 The price differences between the two models made this Sibling Rivalry a tough call. Everything is better in the Veloz, but is it P150,000-plus better than the Avanza? Some would say yes, and others will say no, but a win is a win regardless and the Veloz beat out the Avanza in every category which is good on Toyota’s part. If they didn’t win every category or get edged out by the lack of engine options, then that would be a problem.

Given how there are a wealth of seven-seat options out in the market right now, the Veloz does well to compete with the other seven-seaters in the market but does so at a pretty steep price compared to the rest. That’s where the Avanza steps in, much like what Suzuki is doing with the XL7 and the Ertiga, there’s an option for everyone whether you prefer premium amenities or great value.

It’s a tough call given that Toyota has priced the Veloz so high, but it’s by far the most well-equipped Japanese seven-seater in the market so it’s not exactly ripping you off either. Meanwhile, the Avanza presents a great value for money if you want something to just get the job done time and time again. These two models are now quite distant from one another in terms of price and in terms of what the envisioned use is, and it’s understandable why the two siblings were separated in the lineup. Neither of the two vehicles competes with each other head to head in our books. Instead, the models hit two different kinds of buyers, with the Avanza aimed at the budget-minded, and the Veloz aimed at those who want more from the platform. Now, all there is to wonder about is what will happen to the Rush?