Oh, Toyota. What else is there to say about the Japanese automaker that hasn't already been said? The brand enjoys a solid reputation in the Philippines, where its vehicles consistently garner praise for affordability, reliability, and high resale value.

Toyota's presence in the country spans multiple segments, but its most popular model is, without a doubt, the Vios. Used as everything from taxi cabs to starter family cars, the Vios is a versatile sedan that has stood the test of time. Meanwhile, the Toyota Raize is among the latest in a long line of crossovers to storm our shores. Both have their respective strengths and weaknesses, but if we had to choose, which one would we put on top? On the other hand, the Raize gives us more to discuss. The Raize is shorter and narrower than the Vios, only edging the sedan's height. That said, the Raize features a more modern style, as shown in its aggressive stance and angular body panels. The crossover packs halogen lighting in the lower variants, with the higher models getting the LED treatment. Standard fitments include DRLs, LED rear combination lamps, integrated turn signals, a rear spoiler, and a shark's fin antenna. The top-trim variant also gets a two-tone color option with a blacktop roof. Wheel options include 16-inch or 17-inch alloys.

Overall, the Raize has more to offer across its variants. It's an eye-catching crossover that looks like it belongs in the modern world. While the Vios' looks aren't bad by any means, it pales in comparison with the Raize's styling. For these reasons, the Toyota Raize gets the point for this category. How does one describe the interior of the Toyota Vios? Minimalist and utilitarian would be a start. It's not too flashy but has everything you need in a small sedan. Notably, Toyota did a great job of mixing and matching materials to make the cabin look more premium than it is.

The Vios has an analog instrument cluster for the lower models, while the higher trim levels get Optitron gauges. Infotainment options include a basic 2DIN setup and a 7-inch touchscreen display with WebLink for Android and iOS. Both these systems have Bluetooth, USB, and AUX connectivity. You also choose from two to six speakers, depending on the variant. Sadly, there's no Apple CarPlay and Android Auto on the Vios.

The top-spec CVT model ups the ante with paddle shifters, driving modes, a push-to-start button, a leather shifter, and a light control system with a follow-me-home function.

As for the Raize, its interior looks much more youthful and vibrant. It's recognizably Toyota, albeit with a more modern touch. The top-of-the-line model gets fabric/leather upholstery, a leather-wrapped steering wheel, a 7-inch digital instrument cluster, and paddle shifters. The higher trim levels also get smart keyless entry, a push-to-start button, and a 9-inch touchscreen display.

The lower models get an 8-inch system instead, but Apple CarPlay and Android Auto come standard across the range. Other standard features include speed-sensing door locks, two USB charging ports, and a 12V accessory socket.

When you consider everything, the Toyota Vios isn't at all lacking in features, especially in the top-spec model. However, the Raize packs more standard features and an assortment of modern necessities. Its cabin gives you more to look at, too, and that's never a bad thing. The Raize takes this category, if only because it's newer and shinier. 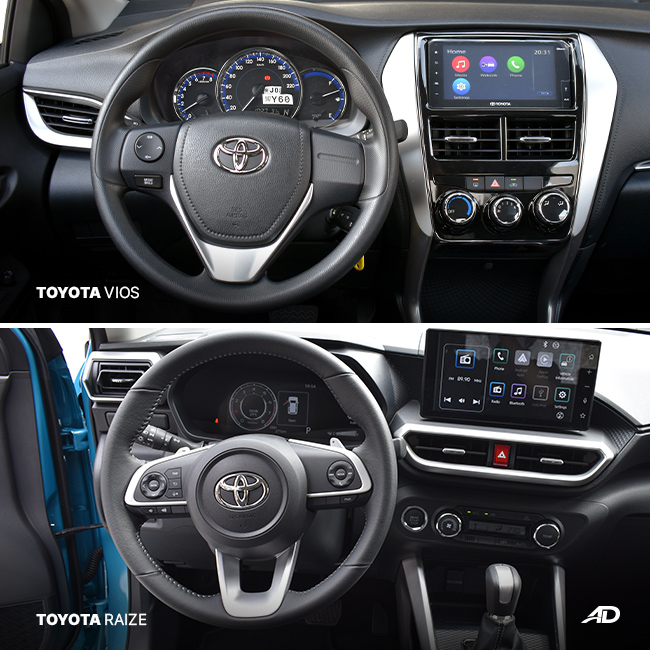 The Toyota Vios is as safe a vehicle as they come. In 2019, the sedan received a five-star rating from the ASEAN NCAP. Aside from being well-built, the Vios features driver and passenger airbags for the base model. The higher trim levels get additional side, curtain, and knee airbags, which inspire confidence for daily drivers.

More than that, the Vios packs safety features like ABS with EBD, vehicle stability control, hill-start assist control, child lock protection, and a high mount stop lamp. The Vios also has the Toyota Vehicle Security System (TVSS) that includes an alarm, immobilizer, or both, depending on the variant.

Moving on to the Raize, we see a crossover with a few tricks up its sleeve in terms of safety. Like the Vios, it also received a five-star rating from the ASEAN NCAP. Unlike the Vios, the Raize offers more active safety features. It gets goodies like blind-spot monitoring and rear cross-traffic alert in addition to ABS with EBD, vehicle stability control, and hill-start assist control. The Raize also gets airbags for the driver and passenger, plus side and curtain airbags on the higher trim levels. TVSS is also present, as is a reverse camera with a pair of sonar sensors.

So, both the Vios and the Raize are fairly safe vehicles that won't get many complaints. Still, the Raize packs more active safety features that you just can't find on the Vios. The Toyota Raize has this one in the bag. 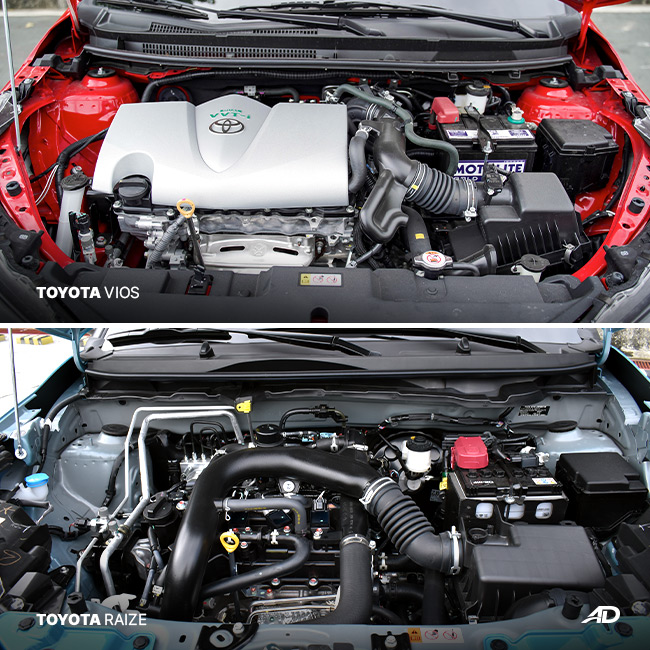 As for the Raize, it's also available in two engine options. The first is a 1.2-liter naturally aspirated engine, which outputs 86 hp and 113 Nm of torque. The second power plant is a 1.0-liter turbocharged gasoline mill that makes 96 hp and 140 Nm of torque.

The Vios comes out on top, and that's for several reasons. There are a lot of Vios engines humming around in the country, so parts and maintenance are likely cheaper than the Raize. They're also inherently more capable than the Raize's options, despite the turbocharged option on the crossover. Turbo doesn't always mean better, and that rings true here. We don't think the Raize is terribly underpowered, but the powertrain selections for the Vios are proven workhorses that last years and years. 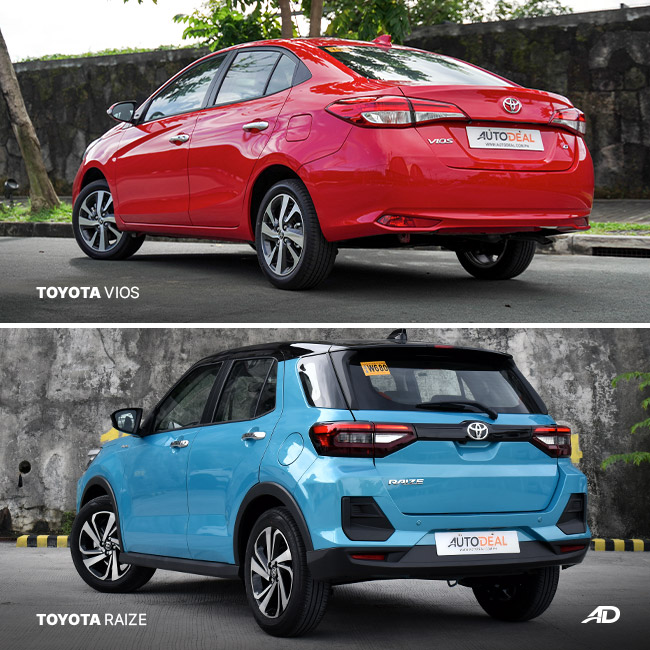 So, if you're after the most affordable brand-new Toyota you can get, then the base model Vios could be right up your alley. However, if you want the best variant available, the Vios and Raize become too similar in price, and you're likely better off getting the Raize. Unless you want more power, in which case the Vios will always come out on top. It's an admittedly difficult choice, so we're giving this category a tie. If you want proven performance, superior parts availability, and relatively inexpensive maintenance costs, you can never go wrong with the Toyota Vios. It's always near or at the top of the list of best selling vehicles in the Philippines. That says everything you need to know about this enduring little sedan.

While the Vios has had an unbelievable run, some believe its time in the limelight is slowly running out. Make no mistake—the Vios is still the go-to option for many car buyers. That's not about to change anytime soon, but the Raize offers an intriguing choice for those who want something different in their vehicle. A modern and affordable subcompact crossover that doesn't compromise features—That's the Toyota Raize.

Whichever one of these vehicles you choose, you won't walk away as a loser. They're both Toyotas, after all, so you'd get all the same benefits from owning one. Ultimately, it comes down to which style and features you prefer and how much you're willing to spend. There's a winner here, though, and it's the Toyota Raize.