Being in a high-speed rear-end collision is not only tricky to avoid but downright dangerous to be in. You can end up hitting the vehicle in front of you or worse, being thrust into traffic by the vehicle that hits you. With that in mind, we have made a quick guide for you to follow in order to avoid these situations and what you should do once you find yourself in them.

Related: What to do when you get into a car accident If you want to avoid ending up in a rear-end collision there are certain things you can do to either prevent it entirely or to mitigate the damage. This can be applied on both the highway in city traffic as it mainly revolves around creating more space between you and the car or possible danger in front. 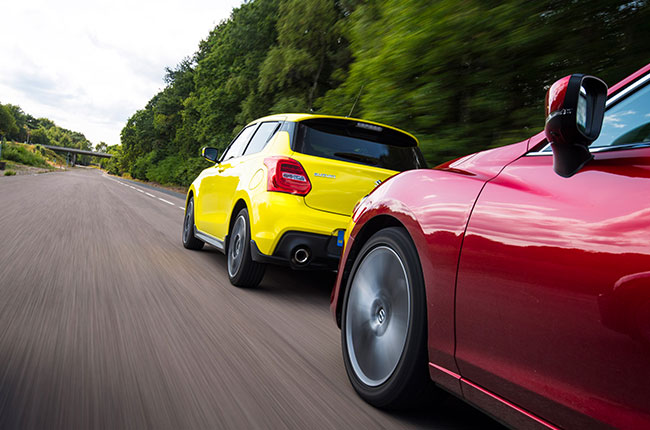 One of the first things you can do to avoid being in a rear-end collision is to leave enough space between you and the vehicle in front of you. This will allow you more space to stop if you get hit or a little bit more room to move forward to avoid getting hit from behind. Having more space also gives you more time to react to sudden braking if the vehicle in front suddenly decides to stop.

In conjunction with leaving enough space between you and the vehicle in front, you can also follow the two-second rule. This means that you will need to give a two-second gap between you and the vehicle in front of you. A good way to determine this is through the lane markings on the road. Focus on a lane marker and count to two after the vehicle you are following it. If the vehicle you are following passes the same spot by the number two count then you are safe. If you pass that same marker before you hit two, then you should leave more room.

The great thing about this rule is that even if you are traveling at higher speeds especially on the highway, the distance will steadily increase even with the two-second gap. This in turn still allows you more space to slow down and stop in case of an emergency. Make sure to also increase the gap between you and the cars in front of you when the weather takes a turn for the worse. In wet conditions, the braking distance required to stop your car will be significantly longer than that in dry conditions. Another way you can avoid being hit from behind is to brake slowly and to brake early. When coming to a stop, braking early will send a message to the person behind you that you are slowing down. This gives them more time to react and avoid hitting your car. However, if you are in an emergency situation where space is limited it is still best to bring your vehicle to a stop as quickly as possible.

Make sure your brake lights work

Another tip connected to this, especially if you are making a turn, is to use your signal lights and to signal early. Other road users are not mind readers and will not be able to tell where you want to go unless you signal your intentions. In doing so, this will save you the hassle of possibly being hit from the back or ending up in a multi-car collision when you need to do an emergency lane switch. Drive defensively and use your mirrors

One way of avoiding a rear-end collision is to drive defensively and be aware of your surroundings. Being aware of what’s around you can give you a better understanding of what’s going on. If you see a vehicle tailgating you, it’s highly advisable to change lanes instead as it could lead to a possible crash. Another way is to glance at your mirrors every now and then as this could offer you a way out in case the car in front of you suddenly brakes hard.

Look and think ahead for possible traffic jams

This applies more to highway driving, however, make sure to look ahead of you to see any potential hazards up ahead. This can be anything such as a stopped car or construction. Knowing what is up ahead will give you enough time to think of what to do and to stop in time. This also ties with braking early as it can serve as a warning to the vehicle behind you that something dangerous is coming up requiring a slow down or a stop.

The foot off the brake v.s the foot on the brake argument Now let’s say you have done everything correctly to avoid a rear-end collision but still end up in the said situation. Here are a couple of things you can do to prepare for the impact and to safely mitigate damage to your vehicle or to your passengers.

When it comes to a rear-end collision there are essentially two schools of thought. The first is foot on the brake, this means your car will take the brunt of the force minimizing the damage to the stopped vehicle in front of you. The other is the foot off the brake approach in which the force of the crash is better distributed and better protects you and your vehicle’s occupants.

Foot on the brake

Having your foot on the brake in the event of a rear-end collision will distribute the forces of the crash better around your vehicle and to the ground. However, while it can minimize the possible damage if another vehicle is in front of you, it takes a toll on your body. Your car may be able to stop after the initial impact but your body won’t. Even with seatbelts on your body will experience a sudden acceleration from the initial hit then a deceleration from when your car takes the impact and stops. If there isn’t too much space between you and the vehicle in front then this might be the best option if you don’t want another collision.

While there are other factors to consider in an event of a rear-end collision this is one of the basic schools of thought that many experts suggest doing. This all depends on your situation, but if there is more space in front of you the second school of thought might apply better.

Foot off the brake

While it may seem counterintuitive that you have your foot off the brake in a rear-end collision the train of thought goes like this. It prolongs the event of the crash itself. It will take more time for the vehicle that is about to hit you to transfer that energy into your car to then ultimately send it moving. The less resistance there is the better the force can be transferred between the two vehicles. The initial impact may hurt but the subsequent slowdown process is much longer and will take less of a toll on your body. Subsequently, you can also hit the brakes after the initial impact has occurred.

So which one is correct?

Both can be correct but it works on a case-to-case basis. If you don’t want to hit the vehicle in front, keep your foot on the brake. But if there is plenty of space at the front and nothing to hit, you can keep your foot off the brake, let physics do its thing, and then slow the car gently after. It’s the happy medium between the two assuming that there is space.

So who will be at fault? Many would assume that the driver at the back will be the one most at fault and will take full liability when someone files a claim. However, there will be times when the driver at the front can also be liable for the crash. This all depends on the circumstances of the incident as there are many factors to consider to just pin the blame on one driver.

Possible injuries that can occur due to a rear-end collision

The possible impact of a vehicle hitting you from behind could compress the spine as well as the disks in your lower back area. This is why it is always important to have yourself checked after an accident as the adrenaline rush from the situation may not yet have worn off.

The sudden acceleration and deceleration from a crash can cause pain in your shoulder and neck area. This is because the incident itself causes either hyperflexion or hyperextension to occur in these areas.

These kinds of injuries occur when your airbags don’t deploy. Your head can end up hitting the steering wheel and the power of the impact could fracture bones in your face. You can also end up getting bruising along your face as well as cuts. If your airbag does deploy it will take most of the force away from your head, however, you still face the possibility of getting a few abrasions to your scalp and face.

As you are being hit from behind in a rear-end collision your body will be thrust forward into the seatbelt. While it will do its job of holding your body in place, the powerful force of the crash can lead to scrapes and bruises on the torso, shoulders, and neck. While these are still injuries that you could face, they are minor compared to what you could face if you aren’t wearing your seatbelt. Wearing a seatbelt also reduces the risk of you being killed in a car crash by 45%.

What to do after the crash