Car batteries do eventually wear out over time regardless of use. It’s a natural part of a car’s lifecycle to go through multiple batteries over a few years. Provided you go with a reputable brand, you can expect at least 3 to 5 years’ worth of service.

Though, let’s say that you are past the 3-year mark, and your battery might be due for a replacement sooner than later. As a part of general car maintenance, how can you tell that it is time to replace it? How do you know that a battery is on its way out and how can you tell the condition of a battery?

It won't start after a series charge Your car’s battery could get discharged over a period of time, or if you accidentally leave a few of its lights on. However, that can be remedied via a quick jump from another car or a battery jump kit. If that solution doesn’t get your car up and running again, after you’ve disconnected the supplementary power source, then you might need to consider getting a new cell ordered in.

It takes effort to crank Another point of consideration is if it takes effort for your starter to crank. Yes, this could be a sign that you have a bad starter, but that’s not the case in most cases. If you turn the key and there is a delay to when you start hearing your engine cranking and turning over, then you might need a new battery. This is assuming that there was no battery discharging going on prior. This doesn’t just go for your headlights or taillights. It could be something as small as your dash lights that could be lighting up like a Christmas tree with a strobe on. A flickering gauge cluster is the first telltale sign that your battery simply isn’t holding a charge anymore. Coupled with the fact that starting your car is hard or there simply isn’t enough juice to crank, means that your battery is on its way out.

Also, watch out for your car's battery warning indicator on the gauge cluster. While not all cars come with a voltmeter, if the voltage drops below a certain level, your car may be able to tell you that your battery is in need of replacing. 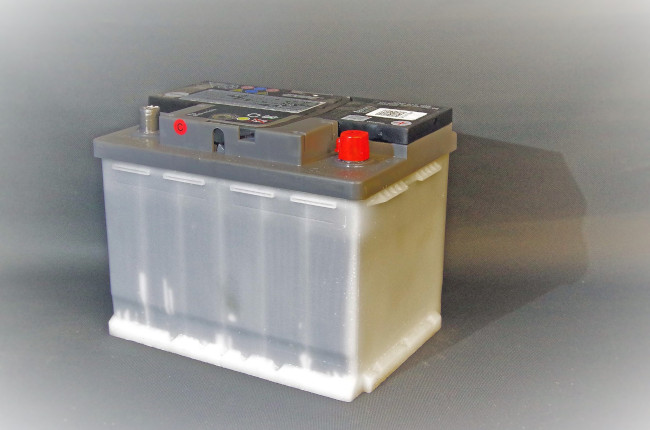 Your batteries are composed of lead and acid, toxic substances that when put together in the right way, hold an electrical charge. With mixed weather conditions, however, and also mishandling, the cases in these car batteries may get damaged.

A battery is due for replacement when you physically inspect the unit and see the misshaped case or battery acid leaking out. Immediately replace the cell if this is the case as a damaged battery wreak some serious damage.

Battery voltage is below the recommended minimum For this, you will need special tools or a display in your gauge cluster or an aftermarket display that will show you the voltage of the battery. Depending on the car, a battery will have different requirements to crank an engine. Though it may depend on the manufacturer and the model, a battery when the engine is not on will throw more than 12-volts. Then when it is running with the help of the alternator, you can expect that figure to go to about 14-volts and up. This will depend on your battery as well as different cells carry different specifications, but typically, you will find that a healthy battery should hit around 12.5-volts or more.

Also, for other cars with start-stop systems, like in the case of Mazda’s CX-8 and other crossovers with its i-Stop technology, your car’s other systems like the lights and the airconditioning systems are still on and are powered by the car’s battery. Other models, however, have a separate battery or power source for this feature if applicable. In the case of hybrids like the Toyota Corolla Altis or Toyota Corolla Cross, the hybrid system’s battery does the work of keeping the car’s electricals in check. It is also important to note that the hybrid battery isn’t the same as the regular car battery that is used to start the engine.

So what do you do? You can pick up a battery for yourself at your local dealer, or you can phone in a replacement to be delivered to you for a nominal fee. Though, if you think that your battery is too young to die, consider using a battery tender to try and resurrect it, or consider running the car for an extended period of time after jump starting.

Lead-acid batteries are more resistant to charge the lower in voltage they go, so it is important to keep your battery topped up to avoid getting a flat or dead battery. When you get a new battery from the shop or seller, make sure that it is sealed and that it also comes with a warranty.