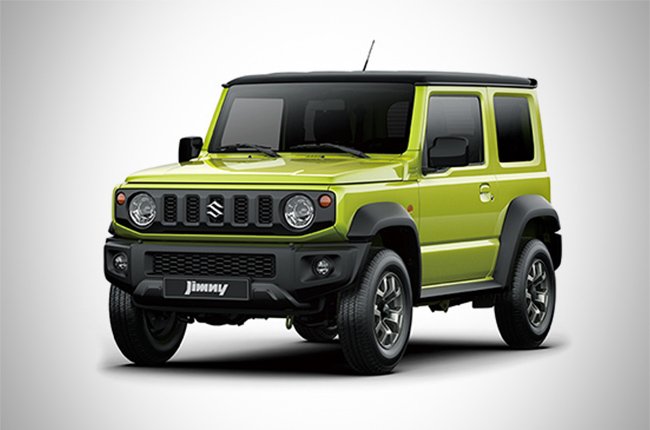 Woah, what's this? A tiny Hummer H2? A small Mercedes-Benz G-Class? No, really, the next-generation Suzuki Jimny is one cute off-road machine that has both American and German exterior touch but to a size of an Asian...vehicle. You've seen it once on spy shots, now here are the official images. Based on the official photos from Suzuki’s global corporate site, the 2019 Suzuki Jimny shows off a boxy body just like that of the Mercedes-Benz G-Class. The front, however, looks much like a mid-shy Hummer. But, let's not judge it by its exterior, after all, "there are places in the world only the Jimny can go." A powerful and effective marketing line for an SUV this size. The interior is like an entirely new world. Goodbye to the old, curvy dashboard and welcome to a neat and edgy dash. It's so pleasant in the eyes that we're caught up imagining we're actually inside it. Mind you, it even has a huge touchscreen for its infotainment. The display system elevates high enough atop the dashboard so the driver could effortlessly view necessary information. Meanwhile, a handrail extension from the passenger side separates it from the rest of the center console. It's so organized, your life would look even messier than it is right now. Early information reveals that the vehicle features ladder frame configuration and the three-link suspension. There's also the part-time 4WD with low-range transfer gear for inclined portions of your off-road trip. Although it isn't confirmed yet, the 2019 Jimny is rumored to be powered by either turbocharged 1.0L K10C or 1.2L K12C DualJet gasoline engines. Its JDM version will get the 0.66-liter R06A power plant to meet the Japanese Kei car requirement for tax benefits.

Well, more details about this little giant will be out once Suzuki makes its official launch on July 5 (allegedly), so stay tuned.