The American automaker, Jeep, is starting the new year off strong as it has just released a new version of a popular unibody SUV into the market. Dubbed the Jeep Grand Cherokee L, it is a longer wheelbase model of the normal version of the vehicle and comes with a third row. It is important to note that the Grand Cherokee is supposed to be just a 5-seater vehicle, however, with the new addition of the third row it can now seat 7. Much like the upcoming 2021 Jeep Grand Wagoneer, the Grand Cherokee takes a few pages from its design book. Its nose is now more upright compared to that of its predecessor, it also comes with a flatter hood, as well as more chiseled lines along the vehicle’s body. Along with this the grille has been also revised to look slimmer than before but still retains its iconic 7-slot design.

Moving to the side of the vehicle and it comes with a more minimalistic approach, there aren’t any sharp angles on it just clean and simple flat lines. Jeep has chosen to put greater emphasis on the subtle details rather than the ones that stand out. Other new changes are a set of fender flares that help give the vehicle a wider-looking stance. To add to this the rear of the vehicle has also gotten a minor retouch with new slim taillights and a curved windshield at the back for a more unique look. When it comes to its dashboard, the Grand Cherokee L has changed quite a bit compared to its predecessor. It now comes with a much larger dash and features a flowing center console, a design element that was not present in the previous version. It also comes with more screens as well as it now features a digital instrument cluster and a 10.1-inch infotainment system. For the higher trim levels, the dashboard comes with trimmed leather with wood cappings on the doors, and steering wheel. 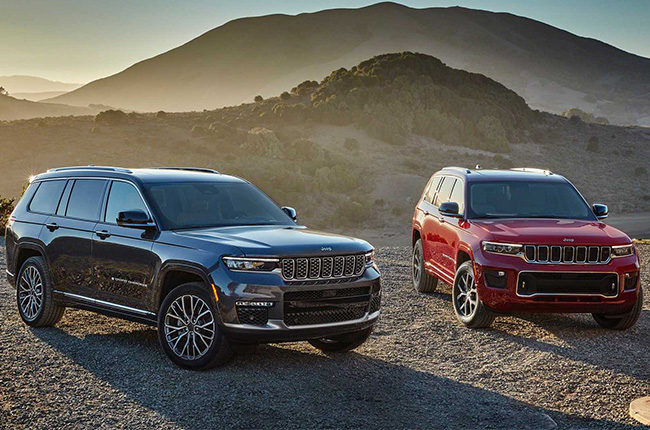 Under the hood, the Jeep Grand Cherokee L comes with two engine options. The first is a 3.6-liter gasoline V6 motor that produces 289hp and 348 Nm of torque, while the second option is a much more powerful 5.7-liter HEMI V8. The V8 powerplant produces 359hp and 529 Nm of torque. Both engines come with only one available transmission option in the form of an 8-speed automatic. Similar to the engine options, the vehicle itself can be had with two drivetrain layouts, the first is a rear-wheel-drive configuration, while the second is a four-wheel-drive option.