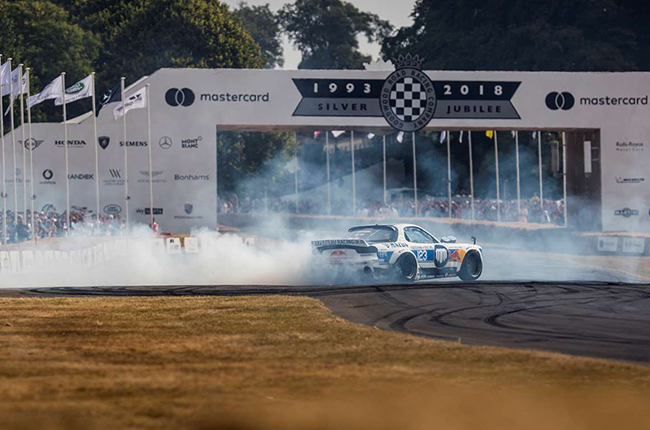 Another great milestone for the Goodwood Festival of Speed has officially ended, but we can’t seem to get over those piercing screeches and overwhelming growls of cool and exceptional cars that completed the legendary hill climb.

In case you missed this major event of the biggest and best classic cars and star drivers, it’s our pleasure to give you a rundown of incredible pieces of machines that showed off their diverse style, along with swiftness and prowess. Let’s start!

To start off, take a look at this 110-year old Mercedes-Benz that brought nostalgia to the crowd with its classic look, coupled with a monstrous noise coming from a massive 17.3L engine that churns out around 120 hp. With an average speed of 55.5 mi/h (89.3 km/h), the 1908 Mercedes finished the climb in 78.84 seconds. Not bad for a century-old race car.

Fans, and even non-fans of the movie ‘Bullitt’ were delighted as the iconic chase car scene from the film emerged from the track and recreated it using the 1968 Ford Mustang GT Fastback and the 1968 Dodge Charger. The catch here is that those two cars are actually the same automobiles used in the famous film, which is now celebrating its 50th anniversary.

The Aston Martin Cygnet is back on the road, but this time, it got an 4.7L V8 engine under its hood. With its small size, who would’ve thought that this hatchback can deliver a beasty performance?

One of the attention-seekers in the event is this colorful Porsche 911. This charmer stood out not only because of its seven-color combination, but also its epic run. Driven by James Turner, the racing driver expertly squeezed the ability and soul out of the uniquely-designed Porsche 911. Check out its feisty act.

Making its world debut at the Festival of Speed, the 2018 Toyota Supra tackled the hill with might. However, this anticipated performance car is still wearing its full body camouflage, enough to build curiosity of the audience. There are no official details about its engine but we can clearly hear the great exhaust sound from the inline-six turbo underneath the hood, rumored to have been engineered together with BMW.

Another car has made the Goodwood a red carpet, the ItalDesign GT-R50. Now in their 50th year, the Nissan and ItalDesign collaborated to bring out a new look to the feisty GT-R, which resulted to magnificent and futuristic coupe. Now, silver and gold on Godzilla won’t go wrong right?

There’s no way we won’t let you see this spectacular stunt made by Terry Grant that wowed everyone in the scene. Driving a Range Rover Sport SVR, Grant managed to successfully accomplish the hill climb by just using two wheels. Yes, two wheels. This performance is now officially listed as the new Guinness World Record for the fastest mile completed by a car on two wheels. Just how cool is that.