Yet another MG teaser has surfaced, and it’s about the new MG 6. While the compact fastback sedan has seen a lot of attention on Philippine soil, a new one certainly exists, and certainly looks like a thorough update over the current model we have now.

However, it seems that MG is throwing a little more spice into the mix with the brand teasing the MG 6 PRO. Based on the new MG 6, the PRO features a more flamboyant physique with a stunningly good-looking body kit and an eye-catching paint job. The brand has teased the PRO variant a few hours before its official launch. The image set includes clips of the car’s front end, wheels, rear, and some shots of the interior. 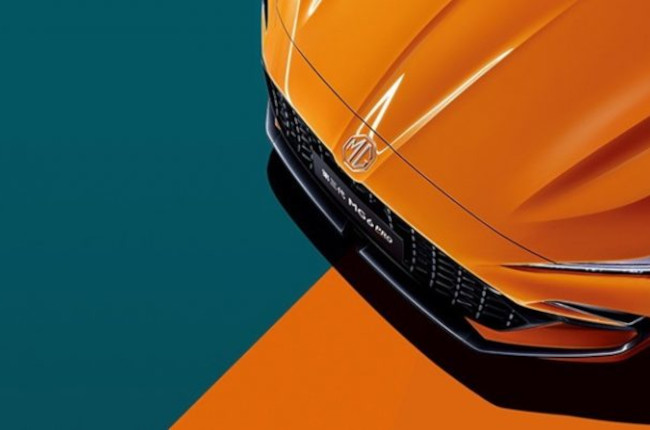 Just looking at the front clip of the PRO variant, and you know that MG has been putting some work into the design department. The front bumper gets a large grille with a unique pattern. The model looks like it moves away from the tradition of honeycomb mesh, which is a win in our books. Apart from that, you get sleek LED headlights and DRLs along with an aggressive set of gills down the side. We hope that these are actual vents and not just there for aesthetic reasons. Also, the logo appears to have moved away from the center of the grille to the top of the front bumper. The wheels are 18-inches in diameter, finished in black, and molded to look futuristic. To add a bit of flavor, MG decided to paint the sliding brake calipers red. Outback, the 6 PRO features a rather large wing. We assume that it’s made of ABS plastic, and the taillamps appear to be darkened a bit in contrast to the regular ‘6.’ Interior-wise, the PRO gets a few tweaks and changes that differentiate it from the standard model. You get body-colored interior panels, along with a new set of white and black leather seats with orange piping. Power is produced by a 1.5-liter turbocharged engine that reportedly will produce 181 hp and 285 Nm of torque mated to a 7-speed dual-clutch transmission (DCT). The launch will happen on June 9, 2021.

While we can gawk and fawn over these teaser photos, MG Philippines has yet to announce an update to its lineup. Perhaps we can expect an updated model to come pretty soon seeing as other countries are getting updated models already.