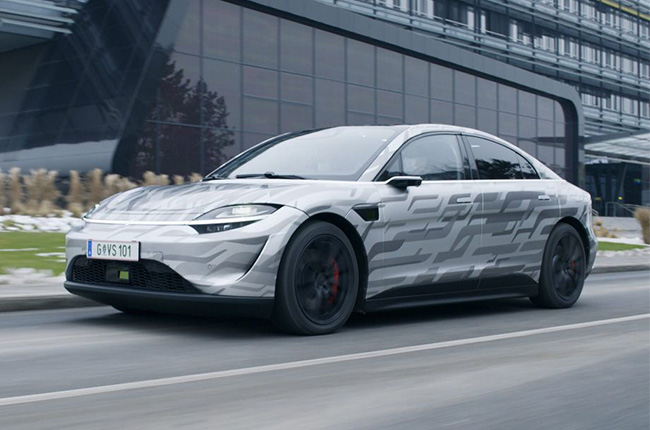 The Sony Vision-S originally made its debut in 2020 at the Consumer Electronics Show (CES). The concept vehicle served as the Japanese brand’s testbed for its automotive and infotainment technologies. While the vehicle was absent in the recent 2021 CES, the company has revealed that it already has an updated prototype ready for testing. With that in mind, the Japanese brand has already sent the vehicle out for testing on European roads. While the vehicle itself is not a hybrid unlike the Toyota Corolla Altis Hybrid or the Hyundai Ioniq, it is an electric vehicle like the Nissan Leaf.

Much like the concept vehicle, the test mule maintains the same look with only a few differences between the two. First is that the test vehicle now comes with a new set of projector headlights, second the test mule also now comes with a slightly adjusted shoulder line to fit lidar sensors that reside in the fender panels. On the inside, the test mule still carries the same layout as the concept vehicle with large screens dominating the dashboard area. Sony has even added switchgear to the vehicle to help make it look more production-ready. A new indicator and gear selector stalks have also been added to help make the vehicle easier to drive than its concept counterpart. The Japanese brand has even added color options to the vehicle with accompanying names (Placid White, Blaze Red, Tidal Silver, and Core Black) just like a regular automaker.

Like the concept vehicle, the test mule also comes with Level 2+ semi-autonomous driving functionality which lets it change lanes and park itself. The vehicle is also rumored to be Level 4 ready with only a software update away to complete the transition. With such a futuristic vehicle already under development, this could signal that a high tech future for cars is just around the corner.