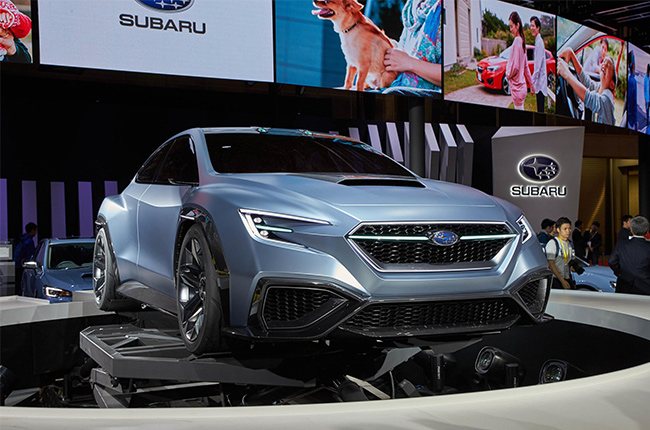 Subaru could be running out of names for their concept cars, as another VIZIV concept emerges at the 2017 Tokyo Motor Show. This time, it’s a performance sedan concept that could hint what the next-generation Subaru WRX would look like…or not.

To recall, it was almost a year ago when the Japanese carmaker unveils the VIZIV-7 3-row SUV concept at the 2016 Los Angeles Auto Show. It would have been the largest vehicle in Subaru’s lineup, until they axed the name just this April in New York as the Ascent concept. But, we’re not really sure if the 7-seater SUV concept has already went down the drain with the re-introduction of the VIZIV performance sedan concept. If you ask us, that’s fine as we would rather see that nameplate as the next-generation WRX. The market is already saturated with huge cars.

Besides, concept cars come and go, just like people. This car may never make it to production but who knows? Anyway, the VIZIV performance sedan concept is the embodiment of future Subaru cars. Fits quite perfectly as its name was derived from the phrase “Vision for Innovation.” Subaru claims that they draw inspiration from the 3 sedans in their lineup for this concept: the midsize Legacy, the compact Impreza, and the sports compact WRX.

If you look at the figures, the VIZIV concept is in between the Legacy and the WRX when it comes to size. Although, it’s a whole lot lower and wider than both, which projects a wider stance and a lower center of gravity especially with Subaru’s boxer engine. By design, however, the VIZIV performance concept is closer to be the next-generation WRX — meshed bumpers, angular fenders, carbon fiber parts, strong character lines, and quad exhausts. Yes, 4 striking exhaust pipes at the back, baby. We highly doubt we’ll see a Legacy that looks this hot and cool at the same time.