On a daily basis, any Tom, Dick, or Harry is fed with hundreds of claimed facts and/or figures about anything under the sun, truthfully verified by their own blood relative’s 3rd cousin’s exotic parrot who could have only heard it from the source’s fish named Wanda.

From alien sightings to nuclear missiles, rounding Hollywood and Philippine Showbiz, we treat ourselves with a dose of entertainment to help pass time along. Let’s be honest, there are some that take what they hear to heart. Bless them. For us discerning ones, well, short of empirical proof, we take it with not just a grain, but a salt lick.

Over the course of Goodyear’s EfficientGrip Performance SUV Tire launch, empirical proof was on tap. The stage: Buriram Circuit. 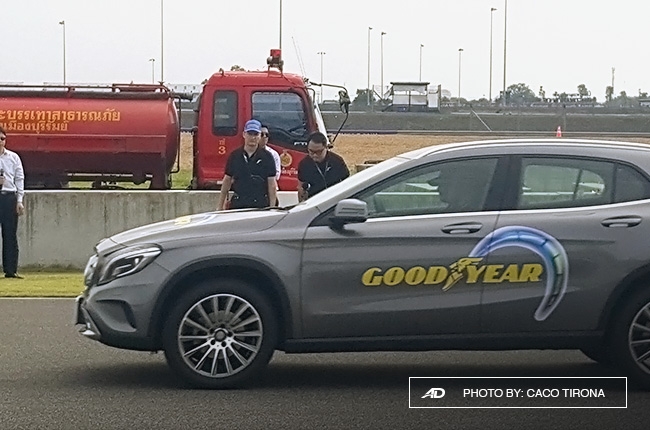 The day’s first exercise was braking distance and audible decibel levels on the main straight. Handicapped with a generous amount of water laid down by fire trucks, and a microphone positioned to read levels as the SUV drove by.

All witnessed firsthand by over a hundred journalists gathered from all over Asia Pacific, the control SUV with volunteer media on board put the alternative tires on 3 identical runs over the watered patch. After which, a flurry mechanics and alligator jacks raced to replace the control SUV’s wheels with an identical set of rims, this time with EfficientGrip Performance tires a la F1 pit stop style. Off it went on it’s run right after, and the crowd’s unison reaction would resonate as my favorite of all time.

As if by some form of ludicracy, the differences in braking distances and decibels by the control tire and the Performance SUV tire were as mad as the 1986 snap elections. But here it was, in all its glory, with over 100 sets of scrutineering eyes; no sight of David Blane trickery either. This was real. The big question, of course, was how.

The formula of compounds from tire to tire are a very well guarded secret. Everybody knows this. In fact, there’s a better chance you, or I, find an end to this debate - Elvis, dies in ‘77 or as the MIB suggests, he just went home. However, there are some secrets Goodyear is glad to to explain and share:

Not to be mistaken for a professionally scripted display, the entire media force was put on the wheel of both control and Goodyear tire fitted SUVs at different sections of the track, including a soaked final turn onto the main straight of the circuit at a pegged 60 km/h. Where the control tires were just all over the place reminiscent of Charlie Sheen’s career, the Goodyears once again reigned supreme. Planted, confident, and quiet.

Goodyear EfficientGrip Performance SUV tires is to be officially launched in the Philippines by September and will be available in 16- to 20-inch rim sizes with speed ratings at H (max of 209 km/h) or V (209 km/h +).