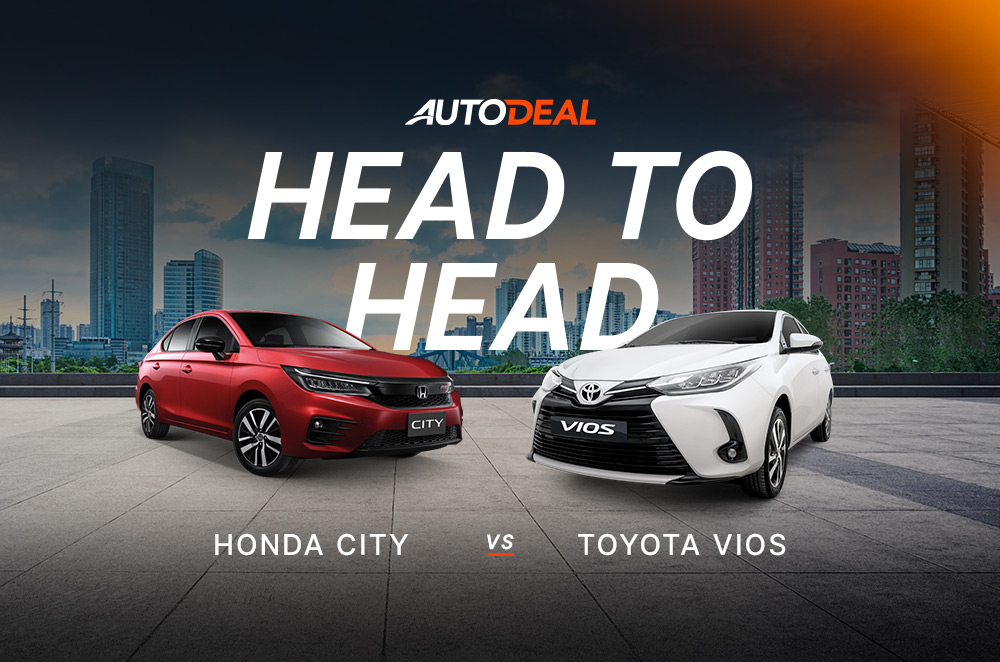 When it comes to the subcompact sedan segment there are two popular choices that come to mind in the Philippines - the Honda City and the Toyota Vios. With both vehicles having new versions entering the market in 2021 we just had to do a head to head to see which one would offer more to the buyer. The Vios brings with it a refreshed face and new features, while the Honda City brings with it an all-new design along with its own new features. With that said on to the comparison. Both the Honda City and the Toyota Vios take their designs in two separate styling directions. The City carries over the more premium and sophisticated looks that Honda is known for in its higher-end models. The Vios, on the other hand, comes with sportier looks featuring sharper headlights and a more aggressive-looking face. While the Vios goes for more cuts and creases in its design the all-new City goes for a more mature and clean-cut style.

When it comes to their own exterior kit both vehicles are on par. Both the City and Vios come with LED lighting elements especially in their higher variants that put them on an equal playing field. So much so that they even match each other when it comes to how many LEDs they have in their headlight housings. Where they differ slightly is when it comes to fog lamps as the City continues the LED theme while the Vios goes for a halogen setup instead.

Ground clearance is also similar to both as the Vios comes with 140mm, while the City comes 134mm. A negligible difference between the two, however, the higher number could prove to be more useful in the event of sudden flooding. Wheel sizes are also similar on both vehicles as the Vios comes with 14 to 16-inch wheels, while the City comes with 15 to 16-inch wheels. It is important to note that the Honda subcompact sedan comes with alloy as the material of choice for its wheels for all variants, while its counterpart comes with a steel wheel option for lower variants. The higher variants of the Vios from the XLE upwards do come with alloy wheels. When it comes to the interior the Toyota Vios has retained the look and feel of its pre-facelifted model. It comes with a gray and black interior, that features soft and durable plastics in the cabin area. Seating material has also been carried over as the sedan can only be had with a cloth material. A smart entry system has also been added to the G variants as well as a push to start button. New driving modes are now available in the higher grades that now feature Eco and Sport modes. The 7-inch infotainment system along with a back monitor for the G variants has also been carried over to the facelifted model.

The Honda City, on the other hand, now comes with a black interior. The seating material has been changed to feature leather and suede for the higher models and cloth for the lower trim levels. The interior has also been updated featuring a more premium-looking dashboard accented by new air-conditioning vents and by an 8-inch infotainment system. Giving it an advantage over its Toyota rival, the Honda City now comes with Apple CarPlay and Android Auto as standards as well as a multi-view camera for the V and RS trim-level. This gives the middle and top range variants of the City an advantage over the G and E trim-levels of the Vios as they come with more standardized tech. When it comes to safety both the Honda City and Toyota Vios are closely matched. The Vios brings with it variants that come with 3 to 7 airbags, while the City comes with variants that have 4 to 6. Other safety features such as ABS with EBD, vehicle stability control, and hill start assist are present in both vehicles. Even when it comes to the ASEAN NCAP crash testing safety rating both the City and Vios come with scores that are worthy of a 5-star rating. It goes to show just how far the subcompact segment has come in terms of crash protection.

Taking a look at the Toyota Vios’ price list and the sedan comes with a more affordable price tag especially for its lower variants.  The entry-level Toyota Vios 1.3 Base MT can be had for as little as P671,000 making it far more affordable than the Honda City S. However, it is important to remember that the entry-level Vios is built to a price and as such don't expect too many features to be present in the vehicle.

When it comes to the higher end of the price range, the Toyota Vios G CVT is the more expensive model as it comes with a price of P1,056,000. This represents a difference of P8,000 between it and the Honda City RS. With pricing in mind and with the features that both vehicles have, the Honda City presents itself with the better value for money proposition. When it comes to these two popular subcompact sedans, it's hard to determine a winner as both have their own merits which suit their ideal market very well. While the Toyota Vios has the more affordable entry-level models and is easier to access for car buyers on a budget, the features that those variants carry are pretty bare. Ultimately the win goes to the Honda City as it provides the right balance between price and features. Not to mention it's the more powerful vehicle of the two and comes with more features than that of its Japanese rival. With only P8,000 separating the two vehicles in their highest trim level, the City comes out on top with the better value for money proposition thanks to its feature-rich variants and newer and more powerful 1.5-liter engine.