Not all subcompact sedans are as mature as these two, the Geely Emgrand and the Honda City. In the subcompact segment of the Philippine market, you have two camps when it comes to buying subcompacts, the brands that corner the sportier side of subcompacts, and then you have those that capitalize on the mature aspect of driving a sedan.

The Emgrand and the City are two models in the market that sport a modern and classy aesthetic that can appeal to drivers with a more mature palate. We feel that these cars are both in a generational cornerstone when it comes to the audience that they’re trying to capture, at least for the Honda City. Meanwhile, the Geely is mature right out of the gate, at least for the Philippines. So what happens when you put them together in a Head-to-Head comparo? Well, let’s stop beating around the bush and find out! There is no denying that Geely’s Emgrand is classy as heck. Exterior detailing on this car gives it a more European vibe even if Geely is unapologetically Chinese. It’s no problem to us where the car comes from when it’s designed this well. The chrome grille gives the sedan a more upmarket look while retaining the standard of Elegance from Geely that can also be found on the Azkarra. It’s otherwise a car that’s been designed without much fluff, and we’ve come to like that about it. That’s just the front, though. The rear of the Emgrand is gorgeous and unlike anything in its class. The rear lights extend from one side to the other, but it’s still as elegant and straightforward as ever. 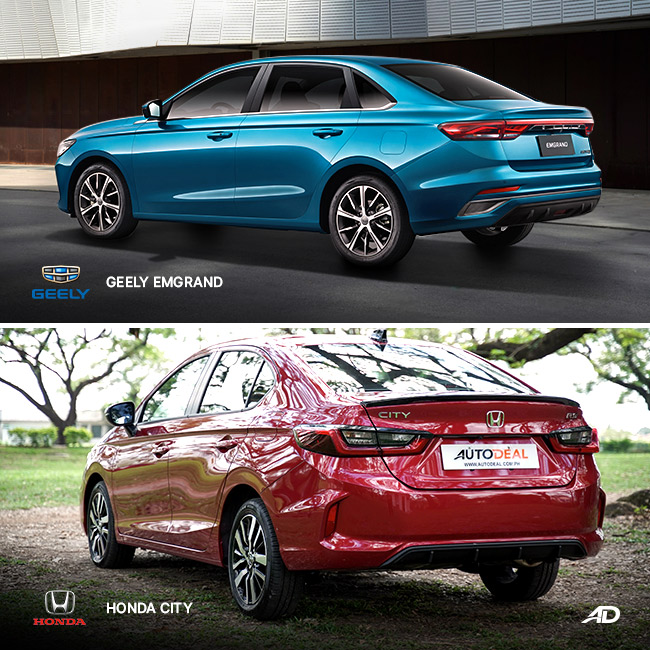 Meanwhile, the Honda City grew up since its last generation. Now on an updated platform, the new model ditches the wedge shape that has dominated the model’s design since the 2010s and it goes for a more elongated design while retaining the subcompact proportions, but with a tinge of elegance borrowed from the Accord. It’s a good look for the City because it retains its sporty character but in a more mature and modern package. 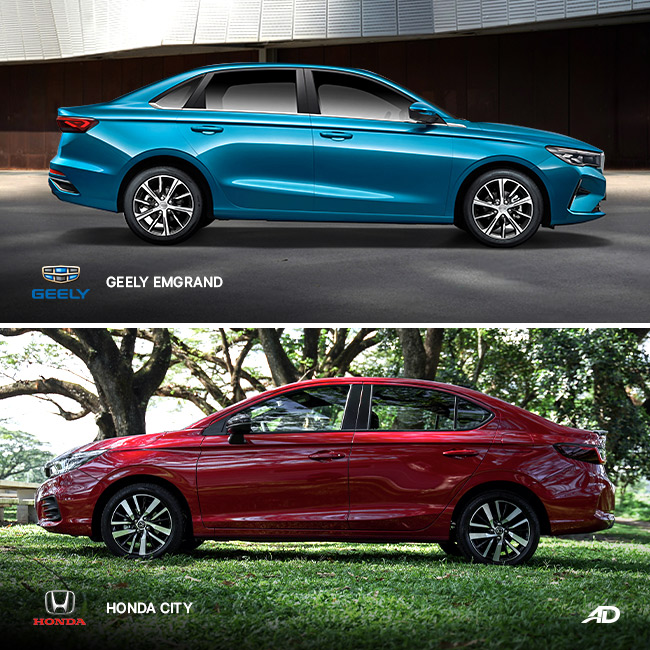 Here’s the trouble, both vehicles are so well designed that we’re finding it hard to find a winner among the two. While the Geely leans more towards the elegant side, Honda makes its best effort to marry youthful styling with more mature sensibilities. We’re hard-pressed to crown a winner so a tie is in order. The mature styling continues once you enter the cabin. If you’re a fan of Geely’s interior design, then the Emgrand’s cabin will be right up your alley. As a show of force, even the entry-level sedan of the Geely brand sports some rather premium materials. Soft-touch everywhere and premium styling that’s straightforward but extremely elegant. Everything on the dashboard is minimal, and the infotainment system floats above to give the dashboard a sleek and clean look. The seats can be finished in a blue

Meanwhile, the Honda is a little more standard in its interior layout, but it’s still well-executed with quality materials and even some red accent lighting on the RS variant. It’s just like the exterior, for the majority of the design, it’s well-kept and put-together but it still has hints of sportiness scattered throughout the cabin. On that note, the RS variant also has red accent stitching and some rather sporty seats, which is a stark contrast to the classier set found in the Emgrand. Once again, it’s a battle between the mature gentleman and another that has a more playful side. In this regard, the Honda still evokes a sense of youth even on the inside, and it sort of eggs you to drive it. Meanwhile, the Geely’s cabin is simply a nice place to be in. Elegant and classy, we have to hand it to Geely for putting in some premium materials, which is slightly better than the Honda’s in several regards. For this category, we have to award the win to the Geely. The brand has been on-point with a lot of its interiors no matter what car you get and the Emgrand is no exception. So this might be where the Geely flexes its more mature side a little too much. The good point about its infotainment is that it has a sharp display that comes in at 8 inches diagonally. It also gets screen mirroring via Easy Connection, however, it’s no Android Auto or Apple CarPlay, which means that it could be a bit lacking when it comes to fluidity and responsiveness. Apart from that, the model also gets other features to make up for its infotainment like a reverse camera with rear parking sensors, cruise control, a tire pressure monitoring system, keyless entry, and a huge 12.3 all-digital gauge cluster. Lower variants of the Emgrand will have analog gauges, however. The safety kit includes up to six airbags in the highest trim level. Other driving safety features include ABS with electronic brakeforce distribution, traction and stability control, and hill start assist.

The Honda City, meanwhile, is more equipped to be compatible with a wide array of smartphones thanks to Android Auto and Apple CarPlay. The two systems alone are a great value add for consumers who frequent navigation apps and music apps for seamless pairing via a USB cable. Because of this, the City’s infotainment system is more realized and its use is a lot more intuitive and fluid. You also cannot ignore the all-digital display of the City. If you’re gunning for a base model, however, you’ll get a half-analog-half-digital cluster. It also has cruise control a reverse camera, and also up to six airbags just like the Geely. Meanwhile, on the safety front, the model comes with driving safety features like traction control, stability control, the ever-needed ABS with electronic brakeforce distribution, and Honda’s Agile Handling Assist.

The Honda wins this time around with a well-featured tech and safety package. It simply comes with a lot more tech given that you get the top-of-the-line variant. The City will be overall more adapted to consumers’ needs provided that they utilize navigation and media functions on their infotainment system all the time. On top of that, it comes with a good standard of safety features. Granted, the Geely also has most of the same features, but you cannot deny that having no Apple CarPlay or Android Auto on Geely vehicles is a recurring complaint. Honda recently updated the City with an engine that comes with two camshafts instead of one compared to yesteryear’s models. WIth dual cams, the City makes a good 119 hp and 145 Nm of torque. While it doesn’t look like an amazing gain over its predecessor’s specifications, the City still is the most powerful subcompact in its class. The motor is otherwise paired with a CVT, which makes it economical when you want it to be an quite decent when you ask the 1.5-liter engine to do a bit of work.

Meanwhile, the Geely Emgrand receives a 1.5-liter naturally-aspirated motor that makes only 102 hp and a comparable 142 Nm of torque. The engine also gets driving modes at its highest trim, but that doesn’t boost its horsepower figures in any meaningful way. The 102 horsepower figure is still just 102 horses, so it migt not win a drag race against the Honda City, but we’d like to see that race happen in the real world if at all possible. Like the Honda, Geely’s motor comes with a CVT as well. It’s probably asking too much of the brand to put in its fabled turbocharged three-cylinder motor, but that might have driven the price up exponentially.

Power is power, and torque is torque, and Honda has a lot of both compared to the Geely. So it’s an easy win for the City.

Honestly, the price of the Geely is extremely good at P908,000 for the top-of-the-line variant. If you want to give up a lot of features, the price dips down to P798,000, which is an absolute steal of a price for a car that comes with Geely’s attention to detail and quality.

Honda priced the City pretty well considering that the outgoing model got quite expensive at its highest trim level. The current generation of the City tops out at P1,069,000 but can be had for as little as P848,000, which is not bad considering the quality that Honda is known for.

So wait, neither of these cars are priced badly, so will it end in a tie? Here’s the thing, we’re handing this win to the Geely because it comes at a lower price so more people can experience the quality and comfort of a well-built sedan. Honda’s well over the million Peso mark for its highest trim level, but Geely is just hovering a little over P900,000 for the top-spec Emgrand. That means that you don’t have to pay over seven figures to get the best-of-the-best from the nameplate, and that makes it an exceptional value.

After tallying the categories together, it’s a tie. We know, some of you might have wanted to see the tried and tested Honda City come out on top, but that’s not the case here. The truth is, Geely has a contender on their hands and the City is in the best shape it's ever been. For a newcomer brand like Geely to sell a car that can compete right out of the box is an impressive feat.

We’re not complaining that Geely has entered the subcompact sedan space. If anything, the brand brings something special to the table in addition to putting pressure on the other brands to do much better. With Geely in the subcompact ring, things are going to get really interesting. Honda stands its ground by being one of the more premium offerings out in the market, but the brand better should get ready to be compared to one of the new kids on the block.