With the introduction of the Geely Emgrand to the market, it begged the question of whether Geely’s subcompact has what it takes to take on the kings in the segment. Perhaps you may consider that the final boss that the Emgrand has to overthrow is from Toyota, and we think that it needs little to no introduction. 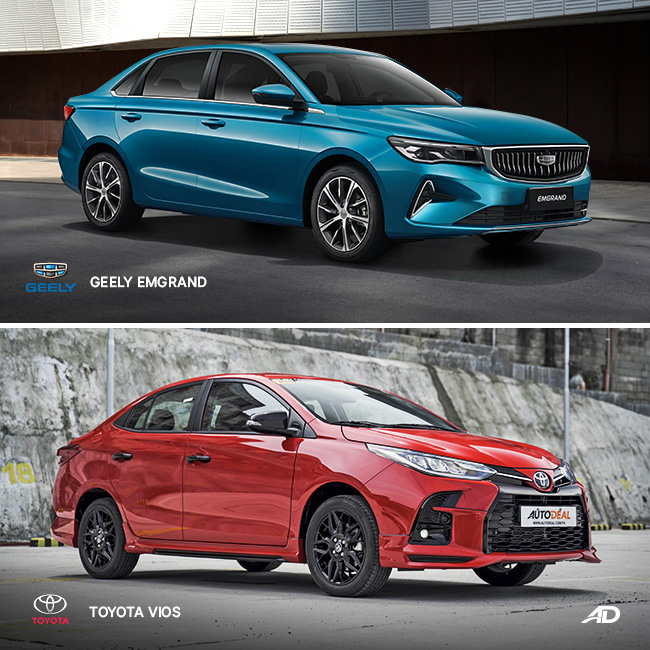 If you ask us, Geely brings a lot of style to the table, albeit in a rather mature package, which is a little ironic because the Emgrand is a new player in the industry. You’d think that the model would go for a more youthful look, but Geely played to its strengths with the Emgrand and kept things classy. The front houses LED everything and the rear is such a treat to look at. The overall look on the exterior side of things is the Emgrad evokes a more mature look overall with its European styling. It’s a far cry from the design of the Vios.

Meanwhile, the Toyota Vios in its GR-S variant has a lot of sporty adornments that include a front lip, side skirts, and rear lip. Because of its design, it’s a more youthful sedan to look at. Toyota has recently updated its front facia a little while back. It still retains the slim head and taillights that the pre-facelift was known for, You might already be tired of seeing the Vios around town, and you’d be forgiven for that. Still, with the GR-S variant, the Vios entered into a new level of sporty desirability. Though, it probably doesn’t have enough grunt to back up the sporty styling. 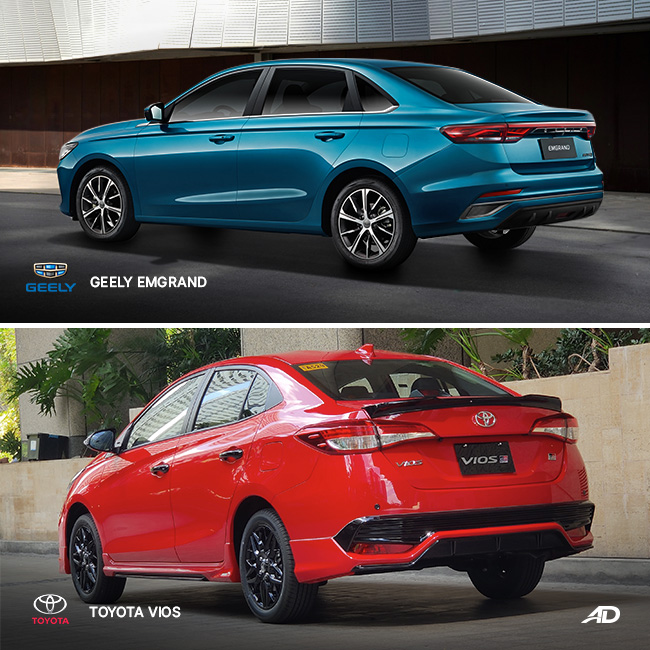 To crown a winner, we have to say that the Emgrand doesn’t try too hard with additional body kits and for other adornments. Meanwhile, the Vios has to kind of try hard to look great, which is a little unfair for the subcompact since it’s such a common sight. Conversely, you can say that a lot of people like how the Vios looks, but either way, in our eyes, the Emgrand is such a breath of fresh and classy air in the segment that we can’t help but give it the win. 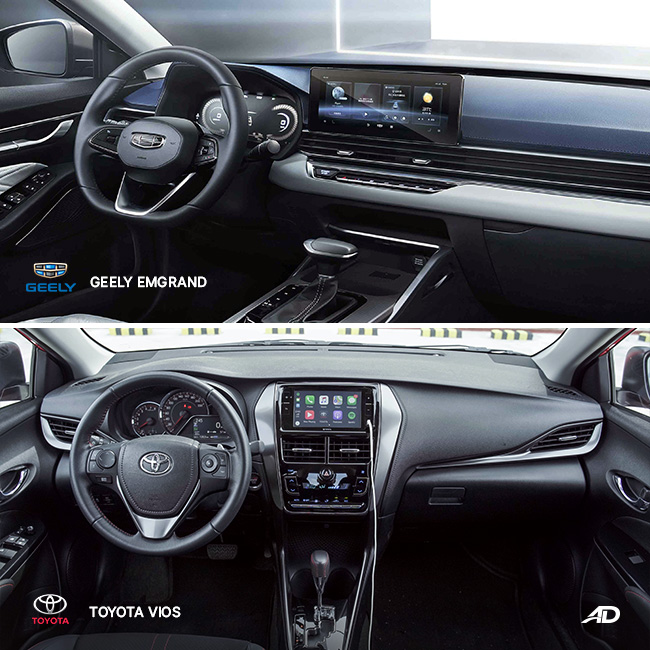 As usual, Geely is on point with its interior quality and design. What made the Coolray so great when it first came out was its premium interior design and its materials. Couple that with the price tag of the Coolray, and people were sure to notice. It’s the second coming of another affordable Geely once again, as the Emgrand can sell you the same premium interior design but with an even more affordable price tag. Expect the same premium treatments from Geely in the Emgrand. On top of that, the model also sports some rather accomodating. A white and blue interior color combination for the top-spec variant. Also in for the top-spec variant is a six-way power-adjustable driver seat. If the blue doesn’t get you, the rest of the interior quality and design will. To top it all off, the Emgrand in its top-spec trim comes with a sunroof that allows the driver to let natural light in.

Meanwhile, the Vios is still the same tried and true dashboard design, however, with the GR-S variant, you get a special pair of sports seats with leather and suede panels that give it a more sporty look and feel. Toyota has also glossed up the interior with several GR badges, both physical and virtual to make the driver feel a lot more special. Otherwise, the GR-S is a Vios with extra bits and pieces installed.

In terms of fit and finish, the Emgrand wins hands down. Meanwhile, the design is a bit subjective. While we do love how the Emgrand looks, there are a few of us in the team that fully appreciate the effort that Toyota took to make the GR-S something special thanks to its upgraded seats and upholstery. While it is a noted effort, the Emgrand is still effortlessly ahead with regard to its design and touchpoints. 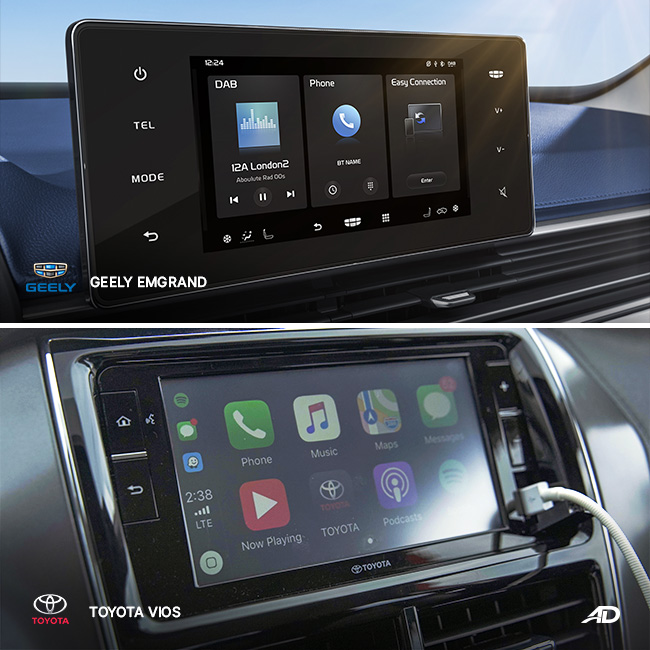 For tech features, the Geely brings a lot to the table. The first screen that you will encounter is the 8-inch infotainment display that’s situated right down the center of the dashboard. The display is as vibrant as the other Geely vehicles, and it is also complemented by a 12.3-inch digital instrument cluster for the driver. Depending on the variant you get, the Emgrand will come with either four or six speakers for its audio system. Sadly, it doesn’t have Android Auto nor Apple CarPlay, but it also comes with a reverse camera, rear parking sensors, a tire pressure monitoring system, and also keyless entry. It’s not a barebones car overall and it’s par for the course for its segment in the top-of-the-line spec. You also get a set of rear parking sensors, a reverse camera and also cruise control.

Toyota Motor Philippines, in response to a myriad of requests to upgrade the technology package in their cars, have done the work and outfitted the Vios with a standard backup camera at the top of the line variant, Apple CarPlay and Android Auto compatibility for certain variants, and even a digital readout for the GR-S variant. It kind of falls short with regard to the size of the infotainment display.

Even with similar features across the board, the Vios managed to edge out the Emgrand with Android Auto and Apple CarPlay, which is getting more and more important by the day. With similar features, it’s a little tough to decide as well since Geely’s user interface is more polished and its 12.3-inch digital gauge cluster is also a big value add to its spec sheet. With both cars putting out their trump cards, it’s a bit of a tie in our eyes. 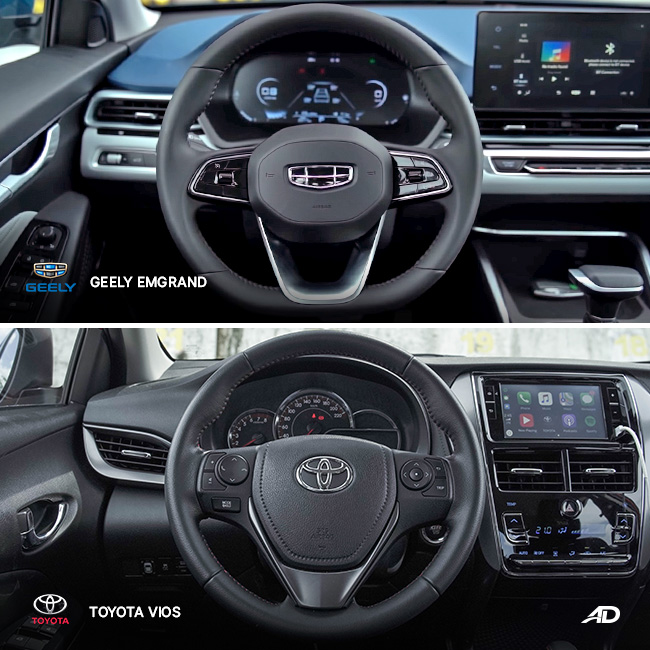 While Toyota likes to split its lineup into two with a 1.3-liter option and a 1.5-liter option for the engine, in principle, either engine is plenty serviceable for daily driving. Meanwhile, Geely sticks with only one engine option for the Emgrand in the form of a 1.5-liter naturally-aspirated motor for the entire lineup. The engine is otherwise mated to a CVT in its highest trim and manual transmission in its lower trim. The Geely makes 102 hp and 142 Nm of torque which is quite enough for the BMA platform that it rides on.

In the Toyota camp, the Vios makes close to the Geely’s power figures, at 98 hp and 123 Nm of torque with the 1.3-liter engine. Go bigger in the lineup, as is the case with the GR-S, and you get up to 105 hp and 140 Nm of torque. Either engine can be mated to a manual or CVT, but the top-of-the-line GR-S is CVT only with Toyota’s special 10-speed programming that gives it some extra sporting character.

Since we are comparing the two top-spec engines, the Toyota wins on power, but the Geely wins on torque. Either come with a CVT automatic, so either model will be pretty neck and neck when it comes to just plain engine power and torque alone. As such, we’re pinning this category as a tie for both models. 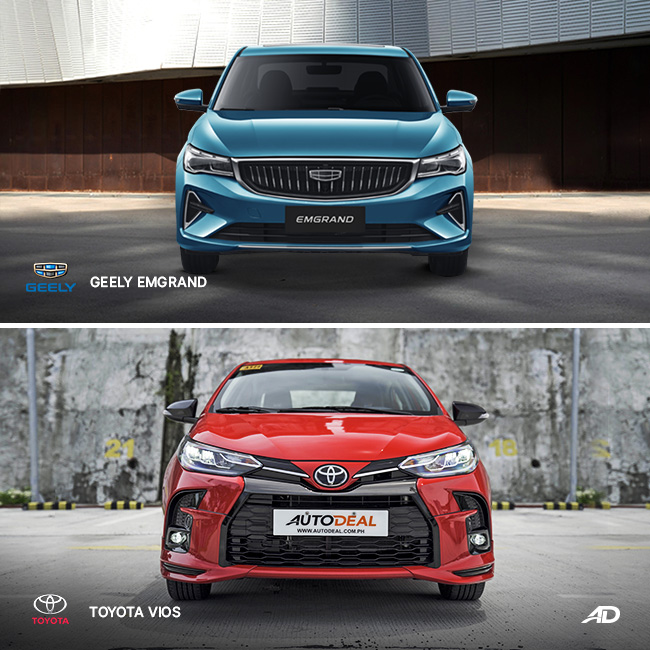 The Geely Emgrand has a standard set of safety features that includes up to six airbags for the top-spec with only two for the lower trim levels, ABS with EBD, Traction control, a tire pressure monitoring system, an immobilizer, and central locking. The standard kit for the segment.

Meanwhile, even if Toyota is considered the gold standard in the industry, it still manages to one-up the rest of the competition by fielding a standard of three airbags in the entry-level models, with the option to go up to seven for every variant in the lineup. In addition to that, you also get vehicle stability control, hill-start assist, ABS with EBD, and brake assist as well.

It’s clear that Toyota doesn’t muck about when it comes to safety, on top of that, the brand has also made it possible for people to get more airbags even in the lower trim levels. The icing on the cake will be the Vios’ five-star ASEAN NCAP Rating, so without a doubt, Toyota takes this category. 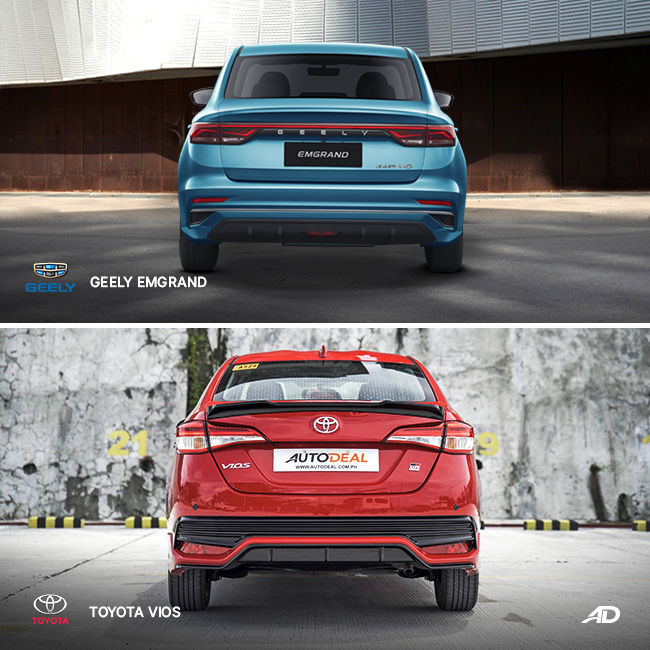 Even just looking at the price tags, you know for sure that your jaw kind of dropped when you saw the Geely’s against the Toyota’s. Even at its most expensive, the Emgrand is still priced at just a little over P900,000, P908,000 to be exact! So that settles it then, right? Not really. Going down the price ladder, you will see that the Emgrand can be had for at least P798,000 for the base model.

Meanwhile, the Toyota Vios GR-S is more expensive as you go up in features, priced at P1,035,000, but the cheapest Toyota Vios that you can get is priced at just P681,000, though it is quite barebones and not laden with features.

While we cannot argue that it is a lot easier to get a Toyota Vios at a lower price, the best of the best variant in the lineup is still more expensive than the Geely’s top-end spec. For car buyers that want to get the best out of their model, we can wholly recommend the Geely Emgrand as its refinement and mature looks are enough to justify the price point that it commands. The bottom line is that it doesn’t look like a sub-one-million peso car, and for that, it wins this category.

With three categories in the bag, the Geely Emgrand, at least in our opinion, stands a good chance of rivaling and even beating the Toyota Vios. We said that the Vios was the final boss that the Emgrand has to face, but winning in the spec sheet battle doesn’t mean that you win the war. Toyota has been fierce in its push to make its cars as reliable and as serviceable as possible. Parts availability is important for Toyota owners, and local manufacturing ensures that there is a steady stream of components for Toyota owners should they need it.

However, the Emgrand is definitely a contender. While the model doesn’t have as much traction in the country yet, it stands a good chance of toppling the giant that is the Toyota Vios. It may take some time for Geely to build its parts availability and its dealer network, but we’ll say that they’re on the right track to delivering a very reliable car buying and ownership experience. In fact, the brand has also stated that they’re committed to bringing in parts as soon as possible should customers need them. That and people don’t have to wait long either because Geely Philippines has gone on record stating that they will do their best to make sure that there is a steady supply and stream of parts coming into the country.

Other than that, however, it’s clear that Geely has set calibrated their sights for the subcompact sedan segment with the Emgrand. The sedan is a winning combination of quality and enough style to keep you entertained. However, let’s see in the coming years how well the brand fares.