The affordable seven-seater segment in the Philippines is hot right now with new additions being introduced year after year. This can come in the form of SUVs, crossovers, or even the venerable MPV. One such MPV that has joined this very lucrative segment is the Hyundai Stargazer, it's one of the brand’s newest vehicles that seek to disrupt the marketplace by offering a futuristic design and a great set of features. It is also ready to take on more established names in the segment such as the Suzuki Ertiga, Honda BR-V, the Mitsubishi Xpander, and the Toyota Avanza.

Speaking of the Toyota Avanza that is what we will be comparing it to today on our head-to-head. Will it be able to name on the popular Toyota nameplate? Find out as we compare their spec sheets to see which one will come out on top. The two MPVs take different approaches to their designs, the Stargazer takes on a more futuristic design with its sloped front wide rectangular grille, vertical headlights, and its LED daytime running lights that run across the front fascia of the vehicle. These design elements and more give it a similar look to its bigger brother the Hyundai Staria which has an equally futuristic style.

The Avanza on the other hand takes a more traditional approach with its horizontal headlights and its massive grille. The vehicle takes on the design language of most modern Toyotas that come with a large grill and sleek headlights. The MPV is also overall boxier in its shape compared to its Hyundai rival which has taken on more curves and creases in its design language. Something to take note of is that in terms of their exterior features both vehicles are on a level playing field. Both come with LED headlights and daytime running lights with their designs only being the difference. Lower variants of both MPVs also come with halogen headlight options which means both are tied for this category. For their interiors, the Hyundai Stargazer comes with a more utilitarian yet modern cabin layout. There are no shiny black plastics inside the vehicle with only gray and darker gray being the color scheme for the cabin. The Stargazer also comes with plenty of storage space inside the vehicle for assorted items and with a built-in cup holder for the rear seats situated on the door sidings. The seats are comfortable and the space is average inside the vehicle even for the 3rd row.

As for the Toyota Avanza, it comes with a more traditional dashboard design that slopes down towards the driver and has a floating infotainment system. It does have storage space throughout the cabin, however, its cubby holes aren't as plentiful. Its seats are comfortable and the space is yet again similar to that of the Stargazer.

In terms of looks, we will give it to the Avanza for this category as its interior helps it look a bit more premium. However, we can’t deny that the Stargazer has a more useful interior thanks to the storage spaces it has and its integrated cupholders on the door sides which opens up more room for the second row. 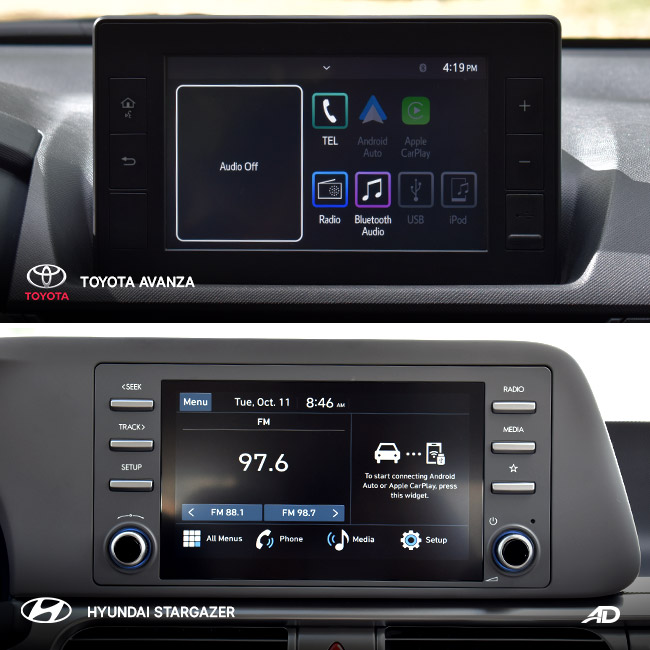 In terms of technology, both vehicles are similar in their equipment, both come with 8-inch touchscreen head units that support Apple CarPlay and Android Auto. Both also come with reverse cameras and both have a substantial amount of charging ports. However, what gives the Stargazer an edge over its Toyota rival is that it comes with cruise control which is a feature not available in the Avanza.

For that very reason, we give the win to the Stargazer as it comes with Cruise Control, a feature that you will appreciate on long drives, especially while on the highway. As for their safety features, both vehicles yet again come similarly equipped. Both come with dual front airbags, side airbags, curtain airbags, ABS with EBD, vehicle stability control, rear cross-traffic alert, and hill start assist. The Avanza does, however, also come with a blind spot monitoring system.

That being said, the safety features that the Hyundai Stargazer carries are important ones and features that should not be overlooked as they help make the vehicle easier to drive and safer as well. Chances are you will end up using these features daily especially when it comes to parking and highway driving. It is important to note that the Stargazer has a 4-star ASEAN NCAP safety rating while the Toyota Avanza has a 5-star safety rating. It may not come with all the fancy safety features but its ASEAN NCAP crash testing speaks volumes about its safety. That's why we give the win to the Toyota Avanza. 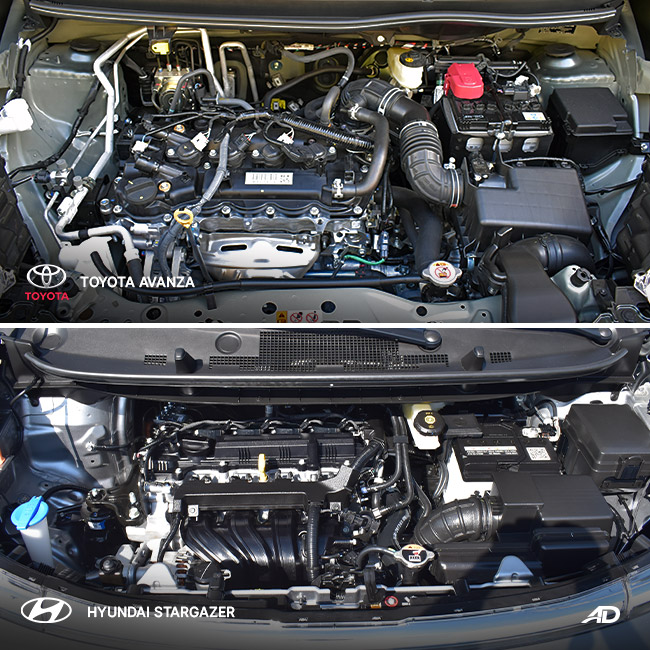 Powering both vehicles are 1.5-liter naturally aspirated gasoline engines with CVTs and manual transmissions as gearbox options for both. The 1.5 in the Toyota Avanza produces 103 hp and 136 Nm of torque. While the 1.5 in the Hyundai Stargazer has 112 hp and 144 Nm of torque. Something to take note of this that the Avanza also has a 1.3-liter naturally aspirated gasoline engine available. However, it produces 95 hp and 121 Nm of torque.

With the power figures of the Stargazer being higher than that of the Avanza, we give the win to it for this category. As these are seven-seaters, the more torque you have the better The Hyundai Stargazer, on the other hand, is the more expensive of the two as its entry-level model starts at above P1,000,000 while its most expensive variant reaches above P1,200,000. However, you do get more for what you pay for with the Hyundai MPV. If you can afford it then you will be rewarded with class-leading features that you will surely enjoy. These features will not only make driving the vehicle much easier but will also make it more convenient for you to stay connected with Apple CarPlay and Android Auto which the Avanza also has.

To conclude, if you have a higher budget then the Hyundai Stargazer is the one to go for, however, if you are restricted by your budget then the Toyota Avanza will happily meet your needs. It may have shifted to an FWD platform but it still carries the brand’s legendary reliability. As this a head-to-head, the Hyundai Stargazer takes the win as you get more for what you pay for despite it being the more expensive vehicle out of the two.