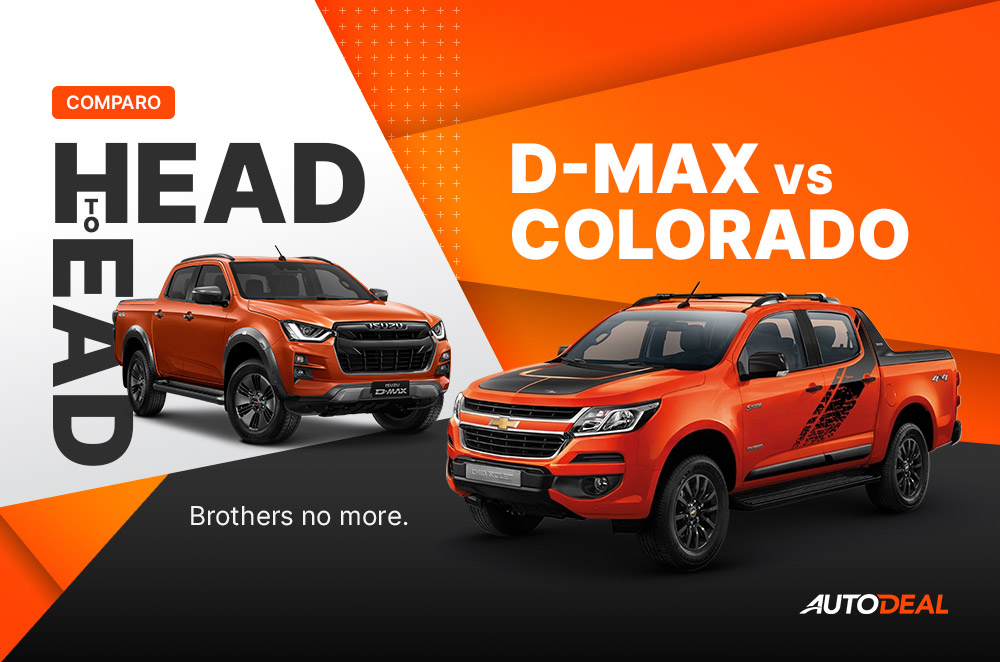 When Isuzu launched the new D-MAX, it severed a connection that has existed for about a decade or so. The Colorado is Chevrolet’s midsize pickup truck in the Philippines, and it’s one of the best values for money if you are looking for a model that can haul goods and haul some butt.

The new D-MAX, however, got some changes under the hood, and it’s now with its own platform and its own special ingredients that make it one heck of a pickup truck. Though, how does it stack up against its Chevy rival? Let’s go head to head and find out.

For this comparo, we’ll be pitting the LS-E and the High Country Storm variants of the D-MAX and Colorado respectively. It’s really a battle of the fronts in this comparison as with most pickups. The rears of both trucks are fairly designed with LED lights and a bumper. However, there’s not much to write about in that area, so the front is what we’ll be talking about.

Edgy is the word that we will use to describe the D-MAX. It’s an evolution on the model that it replaces, but with some advancements like LED headlights and a front grille that can make George Foreman proud. The LS-E has a myriad of matte and glossy gray finishes on a toothy mold. The headlights are all LED, as are the fog lamps, which give the D-MAX a very modern and stylish look. Perhaps the modern design should have kept to its face and not its wheels. The D-MAX’s 18-inch wheels are a little too flat and futuristic for a car that is rugged by nature. It’s a mismatch if anything, and we’d promptly change it out if ever we owned one.

Meanwhile, the Colorado is the same classic design that many fans have come to love over the years. The real downside is the only LED elements on the front are the DRLs. As such, you’ll still get a set of halogens up front, which are not too bad, just not as good as LEDs. Unlike the D-MAX, Chey gave the Colorado a more standard-looking set of wheels that serve its purpose. Blacked-out and 18-inches in diameter, it suits the vehicle rather well.

Between the two cars, it’s rather clear that the D-MAX takes the cake. The design may be subjective, but the specs make the difference here. The decision hinged on the fact that you can change out wheels, but fitting LEDs are tricky and can get quite expensive. Interior design isn’t a high-key priority in the pickup truck segment. At least for most midsize offerings in the market, we usually see spartan cabins with rugged materials. Isuzu and Chevy both were able to buck the trend, but with their own spin on it. As for tech, both cars have keyless entry and capable systems, but only one comes out on top.

The D-MAX is simply gorgeous. Because it is a new generation, Isuzu promptly went back to the drawing board. A lot of us did no like how the prior generation looked, but it was plenty durable enough to not look shabby after a long time, but that’s about it. Isuzu took a 180-degree turn and made the interior of the new D-MAX a place that you won’t mind living in—it’s that good. Covered in leather all around, the brown tones in the cabin warm up the atmosphere in the vehicle making for a pleasant drive or ride. It’s rare to see this level of refinement in a pickup, and even rarer still is the fact that it is an Isuzu we’re glad to sit in. Also, expect a great infotainment experience. Feast your eyes on the 10.25-inch touchscreen with Apple CarPlay and Android Auto. This unit serves as the centerpiece in the middle of that gorgeous dashboard. On top of that, you also get a nice and clear gauge cluster with an LCD in the middle along with speakers that help round out your in-car entertainment system. Adding to that, Isuzu also bundled in a clinometer and a reverse camera to sweeten the pot. 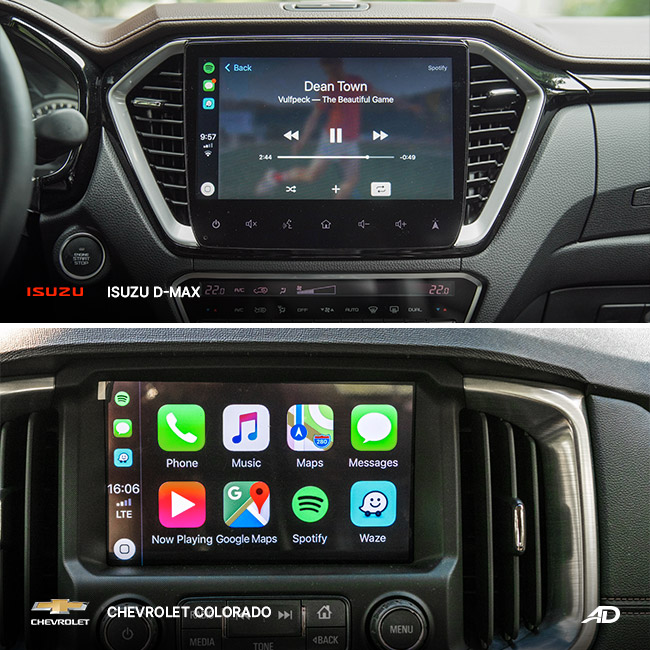 Now, the Colorado still is more rugged than luxurious, but its cabin is finished with dark-tone brown leather. It feels durable enough and Chevy even gave it some badging on its seat that adds a bit of posh to the cabin. That being said, the overall design is still a bit dated, and a bit hard to compare to the D-MAX outright. While it sports the same infotainment features as the D-MAX, it does so in a more compact and less glamorous way. The MyLink infotainment system comes in at 8 inches and the truck comes with a reverse camera, but no clinometer.

So the winner is definitely the D-MAX. It may win on the wow factor, but it remains to be seen if it will be durable enough. Chevy’s choice thinks inside the box for pickups, and Isuzu evolves the concept to appeal to more people looking to get as much as they can out of one pickup. The Winner, because of its appeal, is the D-MAX. 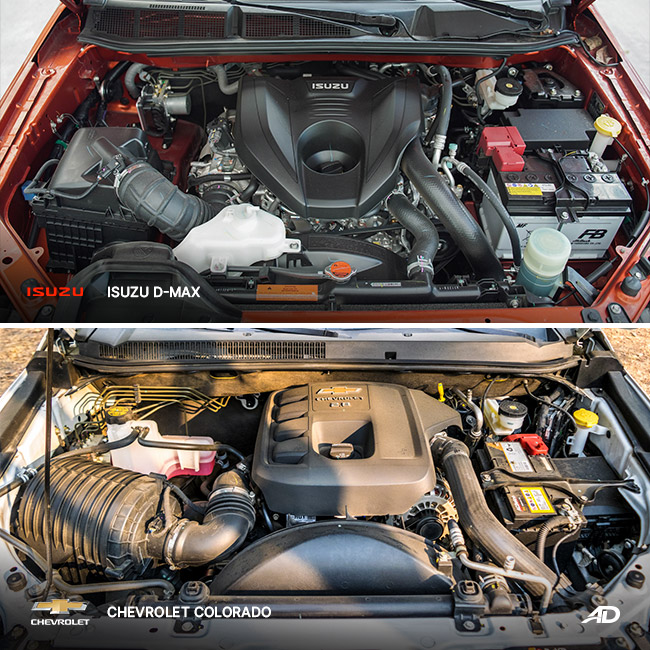 Was a bump in power enough to overpower the Colorado? Known for its 500 Nm torque rating, the Chevy was the first-ever pickup to be crowned the King of Torque. Chevrolet has stuck to their guns ever since, still fielding the 2.5-liter Duratorq diesel motor, but did Isuzu soup up the D-MAX enough to compare? Yes, but to win?

The D-MAX’s power rating now sits at 187 hp and 450 Nm of torque. That’s enough for most if not all tasks that you may need from the midsize pickup. We will say that this power and torque figure was the sweet spot, but Toyota and Ford have upped their game producing over 200 hp and 500 Nm of torque in recent years. Still, it’s nice to see that Isuzu is inching closer and closer to the leaders of the midsize segment.

Speaking of 200 hp and 500 Nm of torque, that’s the power figure of the Colorado. Prior to the competition stepping up their figures, the Colorado was the undisputed king of torque at its peak. Don’t get us wrong, the Chevy still stacks up, coming in third for overall figures, but then how that power is delivered is a different story.

Specs alone don’t tell the whole story, and admittedly, the Colorado is beefy, but the D-MAX seems to be more balanced in the way it delivers its torque. The Chevy’s powerband has a lot to give and the turbo kicks in relatively early, but not as early as the D-MAX. However, raw power is raw power, and we cannot deny that we wished that Isuzu went all out. 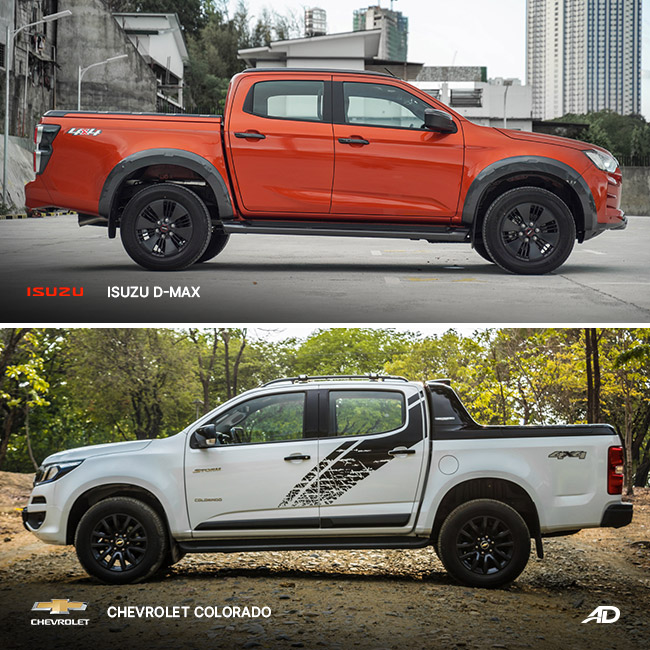 The length of the D-MAX’s paragraph says it all. It’s the winner in this section of the comparo. All of those features don’t matter if you can’t afford the car it comes with, and both pickups are the top-trim offerings in the market now, but one’s definitely more affordable than the other.

The D-MAX comes in at a whopping P1,825,000 for the top-of-the-line LS-E. It’s a bit pricey, but you get a lot of kit and refinement over the competition with Isuzu’s package.

Chevrolet Philippines will happily sell you a Colorado High Country Storm for just P1,638,888. More affordable than most high-end offerings in the midsize pickup space.

In terms of pricing, we cannot deny that the Colorado is still a capable truck, and it’s one of the least expensive offerings with a full feature set.

Let’s get straight into it. Isuzu wins this comparo by a high country mile. The Japanese brand has definitely done their work to make its pickup one heck of a truck. Chevy, on the other hand, has stagnated quite a bit in the midsize pickup segment. The Golden Bowtie, you could say, has rested on its laurels quite a bit, and has fallen behind on the latest and greatest technologies.

That being said, it’s not all bad. The Isuzu D-MAX is quite expensive, while the Chevrolet Colorado is still a kicker that won’t punch a hole through your bank account. Don’t get us wrong, it’s still a pickup, but the lack of features means that it’s not a prime candidate for many who are into getting the latest and greatest. Perhaps it’s perfect for bargain hunters that just want something without all the fuss?

In whatever case, you can pickup our winner using our ‘Get Quote’ feature. It’s also free to do so and you can connect to the nearest Isuzu Dealership as fast as possible.