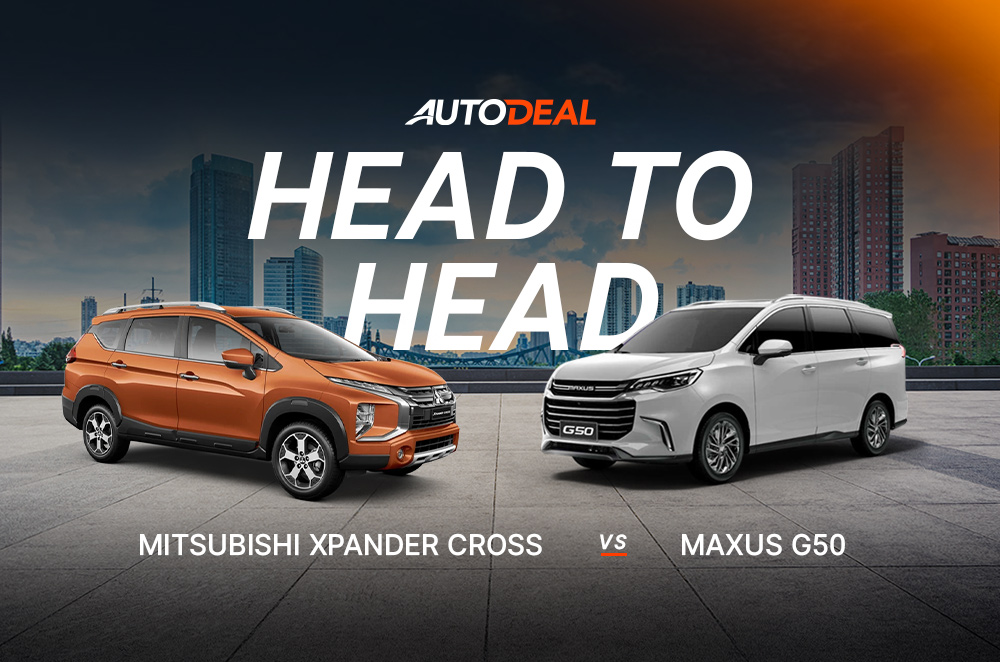 The MPV segment just keeps on growing in terms of options. Gone are those days when selections were only limited to some renowned nameplates such as the Toyota Innova and Avanza, as well as the discontinued Mitsubishi Adventure. Today, buyers now have a wide range of options, apart from the Japanese automakers, other manufacturers have also been stepping up its game. In this case, British car brand Maxus, has brought in the G50, a compact MPV. Despite that, it still has a quality to it, plus, it comes with a generous amount of convenience features, ample cabin space, and a small yet mighty power plant. 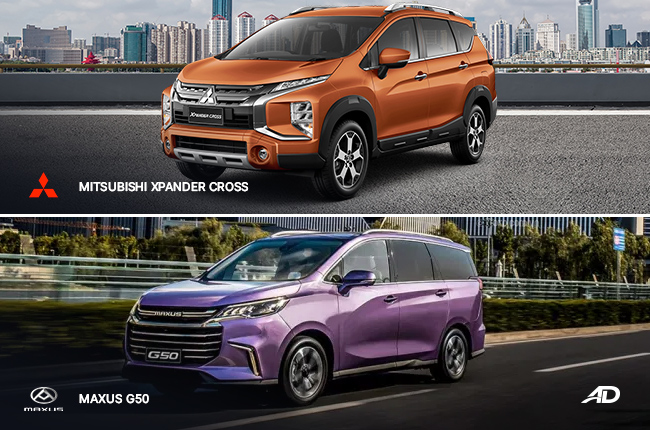 First off, it is worth noting that the Maxus G50 is longer, wider, and taller than the Mitsubishi Xpander Cross. For reference, the Maxus G50 measures at 4,825mm in length, its width at 1,825mm, height at 1,778mm, and 2,800mm for the wheelbase. The Xpander Cross, on the other hand, is smaller by 4,500mm in length, 1,800mm for its width, 1,750mm of height, and a wheelbase of 2,775mm. While no exact measurement was provided by Maxus for the ground clearance, the Xpander Cross does sit higher above the ground, specifically at 225mm.

As for the exterior, both vehicles come with their own signature look. The Maxus G50 sports a traditional MPV look which sort of has a minivan shape to it. The Mitsubishi Xpander Cross, on the other hand, is infused with a bit SUV DNA, given the extensive rugged adornments and the higher ground clearance.

Comparing the range-topping G50 Premium with the Xpander Cross, both MPVs come with LED Headlights for good illumination at night. Like the front, the taillights are also treated with LEDs. As for the shoes, the Xpander Cross gets 17-inch rims that are then wrapped in 205/55 tires while the G50 Premium comes with 17-inch alloys as well, but paired with 215/55 tires.

If you want something that’s bigger and more straightforward, then you’d probably choose the Maxus G50. However, if you’re more of an outdoor person and you’d probably want something that looks louder than the usual, then you’d pick the Mitsubishi Xpander Cross. It really is just a matter of preference, therefore, we are then ending this round with a tie mark between two vehicles. 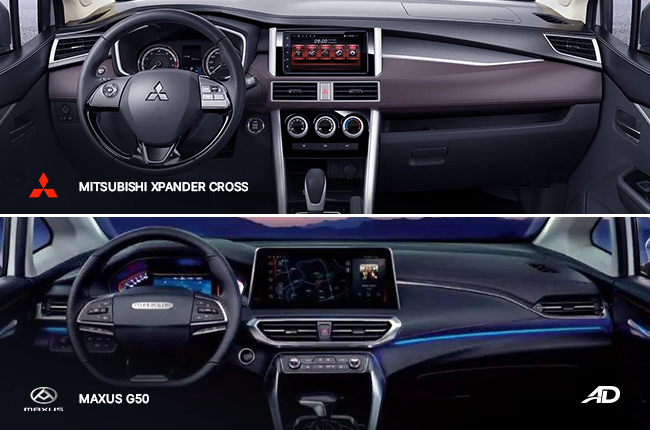 Both vehicles are relatively spacious, however, the G50’s larger dimensions does translate to a roomier cabin. In fact, the British car brand claims that the MPV can seat up to eight people, this is perhaps achievable if you are to squeeze in a petite person at its third-row. The G50 also wins in terms of cabin space. Fold the second-row seats and the flat loading area equates at over 2,000 liters of space. The Xpander Cross doesn’t fall short on cargo though, in fact, its figures do go in line with its larger brother, the Montero Sport, with it having over 1,600 liters of space after folding the second and third-row seats.

The two cabins are well-laid out, while the Xpander Cross gets hard-touch yet durable plastics, the G50 gets a fair share of soft-touch materials which heightens its overall approach to quality. In terms of features, the range-topping trim of the Maxus and the Mitsubishi Xpander Cross benefit from rear aircon vents, leather upholstered seats, steering wheel-mounted controls, and a push start button. Only the G50 Premium, however, gets automatic climate control, a wireless charging pad, a panoramic sunroof, an electronic parking brake with an auto-hold feature, and the panoramic sunroof.

There may be a slight price gap between the G50 Premium and the Xpander Cross, however, the extra cost is well justified by the additional goodies you’d get on the Maxus. Apart from its better practicality, it also comes equipped with an extensive amount of features, making it the overall winner of this round. The G50 Premium and Xpander Cross both come with a 1.5-liter gasoline engine however, only the Maxus is turbocharged. Respectively, the Mitsubishi puts out 103 hp and 141 Nm of torque which is quite sufficient for its size, as the vehicle still renders that certain amount of peppiness. The Maxus’ turbocharged mill, on the other hand, produces a healthier 167 hp and 250 Nm of torque, therefore, delivering power works in a smooth and linear fashion. As for the transmission, the Maxus is paired with a 7-speed DCT while the Mitsubishi comes with a 4-speed automatic gearbox.

While the Xpander Cross has a capable and well-performing power plant, the Maxus G50’s turbocharged engine does render more potent numbers than the Mitsubishi therefore giving justice to its bigger body. That said, the Maxus G50 successfully wins this round. 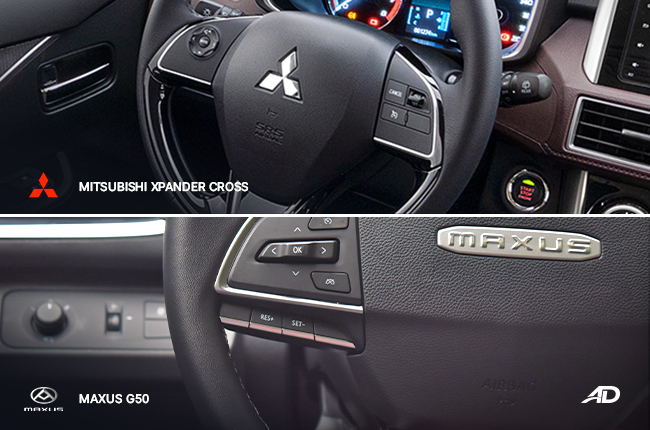 As for safety and security features, both vehicles get airbags, specifically, driver and passenger units for the Xpander Cross, while the G50 Premium gets the addition of front side units. Other features include ABS, EBD, stability control, hill start assist or hill hold control, and immobilizer. Additionally, both vehicles get a reversing camera, while the G50 Premium comes upgraded with a 360-degree system.

Given the additional airbags and the 360-degree camera which is quite a handy feature for a vehicle of its size, the Maxus G50, once again, takes the crown. As mentioned, there is just a small gap between the two vehicles in terms of pricing. Specifically, the Xpander Cross retails at P1,255,000, comparing this with the range-topping G50 premium, the price only exceeds by P1,288,000, which is only P33,000 more than the Xpander Cross. Despite the slight price jump, the Maxus does give you a lot of extra features. Apart from that, it’s quite surprising that the G50 variant range starts at an affordable price tag, specifically at P1,088,000 for the Pro trim. Now, that affordable price already gives you a spacious hauler that comes with a small yet mighty power plant and a generous amount of features as well. 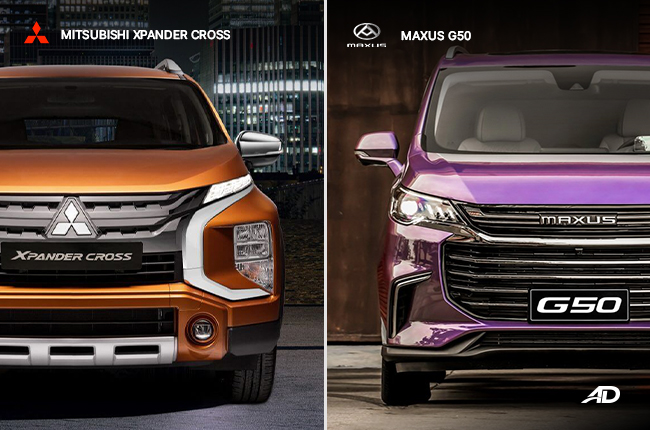 The Maxus G50 Premium managed to outdo the Mitsubishi Xpander Cross in several categories which makes it the overall achiever of this head to head comparison. Surprisingly, for its price which is darn close with the Xpander Cross, Maxus just gives you quite a lot of additions which should complement the overall experience of the driver and its passengers. More importantly, it's a bigger vehicle, and those bigger dimensions do translate to larger cabin space.

While the Xpander Cross did come out at second for this comparison, it still remains as one of the most competitive vehicles in its segment. Still, it’s safe to say that you really can’t go wrong on either of these two, what really matters is your personal preference and more importantly, your budget.