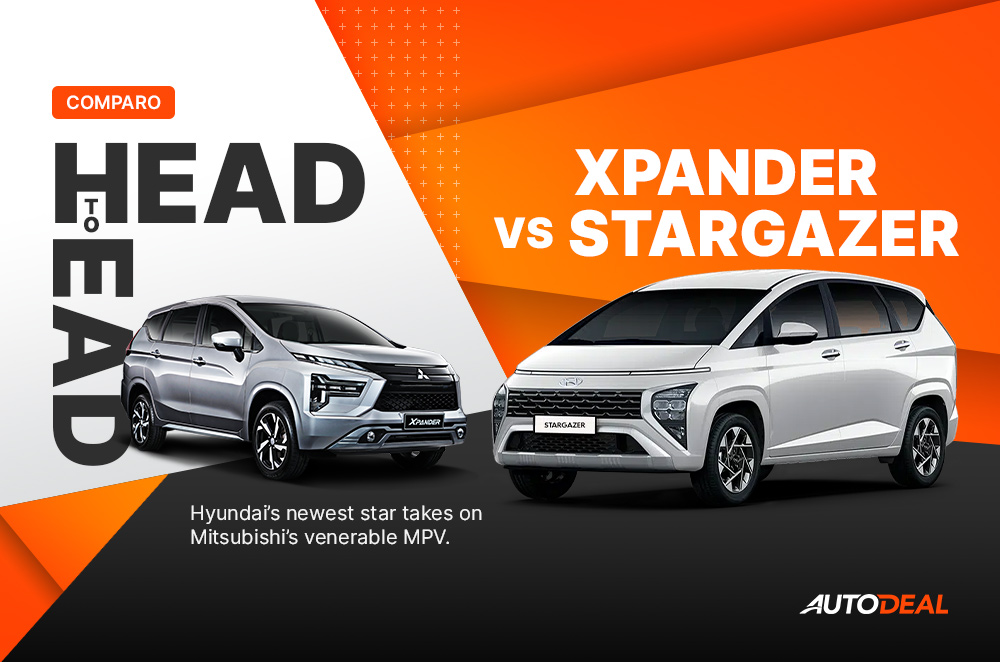 Multi-purpose Vehicles (MPVs) have come into their own in the Philippine market. You have multiple options to choose from naturally aspirated motors to turbocharged power plants to pick from. You also have vehicles with SUV-like looks and cars that retain more of a van-like design. Then you have the newer age vehicles that take their designs to the next level in terms of the radical and futuristic.

Two examples of these vehicles are the Mitsubishi Xpander which came to the market with the brand’s unique dynamic shield design language and the Hyundai Stargazer which came with a similar futuristic look. Today we will compare both of them to see which one comes out on top in terms of specifications and see which one you should get. 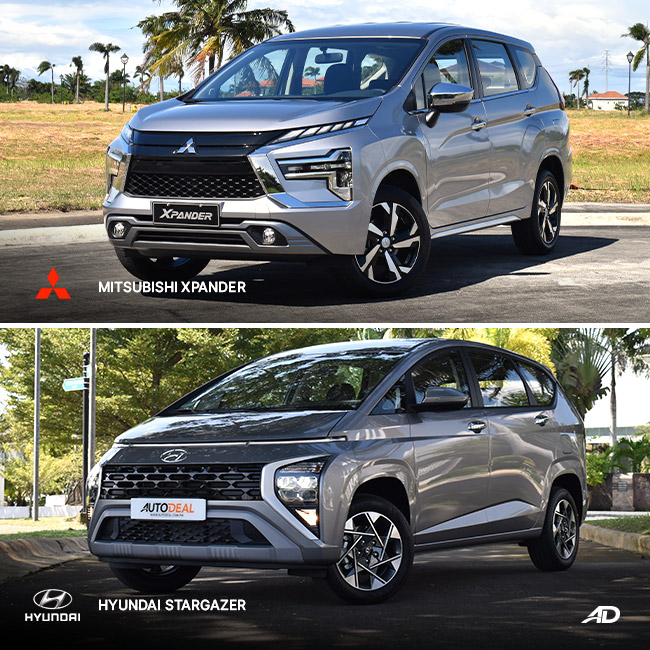 In terms of their design language, we can see that they both have a futuristic look in mind. The Xpander takes on more aggressive lines for its front end with its T-shaped headlights and its sleek daytime running lights found closer to the hood of the vehicle. The Stargazer takes on a similar design as it too comes with its daytime running lights close to the hood and comes with a C-shaped accent on the front bumper. Like its rival, the Hyundai also sports a unique headlight design that reimagines the typical triangular design found in more conventionally styled vehicles.

We can’t deny that the front fascias look similar to one another with the Xpander going with a more angular look and the Stargazer going for something with softer curves. With that said, it all boils down to personal preference when it comes to styling, so we will give this category a tie. 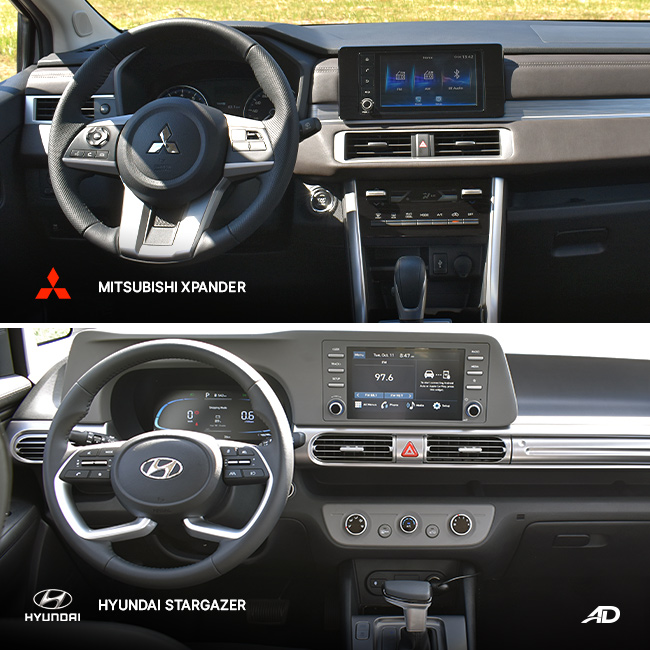 Now we move on to the interiors of both vehicles, starting with the Xpander it takes on more of a horizontal-themed cabin with clean lines and sharper angles that can be found on the dashboard. It's a departure from its previous iteration that focused more on curves. One thing to note is that the Mitsubishi MPV does not come with a digital instrument cluster or leather seats.

In the case of the Hyundai Stargazer, it comes with a more minimalist design. Entering the cabin and you sense that the automaker designed the vehicle to be more utilitarian than premium as there are no piano black materials that can be found. It carries more durable plastics that you know can take a beating and keep on kicking. Unlike its rival, the Stargazer comes with a digital display and leather seats.

With both vehicles taking radically different approaches to their interiors, we will give the win to the Stargazer. Despite the cabin being more utilitarian focused it still manages to pull off a premium look and feel to it. It also helps that there are more storage spaces available inside the MPV and it comes with more useful features such as wireless charging which ups its game in the market. As for their technical features, both vehicles carry a large infotainment system that comes with Apple CarPlay and Android Auto capabilities. The Mitsubishi Xpander carries a 7-inch infotainment system while the Hyundai Stargazer has an 8-inch head unit. Both come with great displays and easy-to-use interfaces. Something to note is that for the higher models, cruise control is available along with a reverse camera.

Since both MPVs are similar in this regard, it's only natural that we assign this topic as a tie as there are only negligible differences between the two. For this category, we award the win to the Hyundai Stargazer as it offers you a whole lot more in terms of safety. Under the hood, both cars are powered by a 1.5-liter naturally aspirated gasoline engine. The Mitsubishi Xpander makes 105 hp and 141 Nm of torque, while the Hyundai Stargazer makes 112 hp and 144 Nm of torque. The Xpander shifts via a four-speed automatic transmission while the Stargazer has an IVT. Both vehicles are also front-wheel drive.

Based on power figures alone and with the Stargazer coming with newer transmission technology we will award it the win. 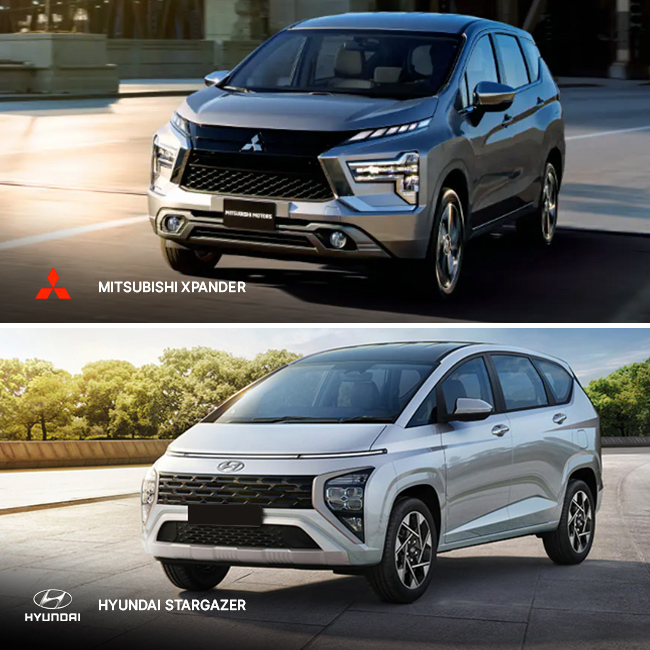 This means that the Xpander may start at a higher price compared to its South Korean rival but gives you more value for money overall in terms of its variant range.

That being said, we move on to the verdict. All in all both vehicles are great MPVs for what they offer. The Stargazer has set the bar high for its entry into the segment bringing with it its futuristic styling and great feature set. Meanwhile, the Xpander remains steadfast in the segment as one of the strong players thanks to its recent update giving it a refreshed look and a more premium interior.

This now begs the question, which one should you get? Answering this is a bit tough as they both come with their unique pros and cons with you not being able to go wrong with either pick. However, based on the spec sheet the Hyundai Stargazer comes out as the overall winner. It's more powerful and has more torque, it has a more utilitarian interior with more storage spaces which many will appreciate, it has futuristic looks, and comes with more advanced features as well. It may be the more expensive pick but you are getting your money’s worth for it.