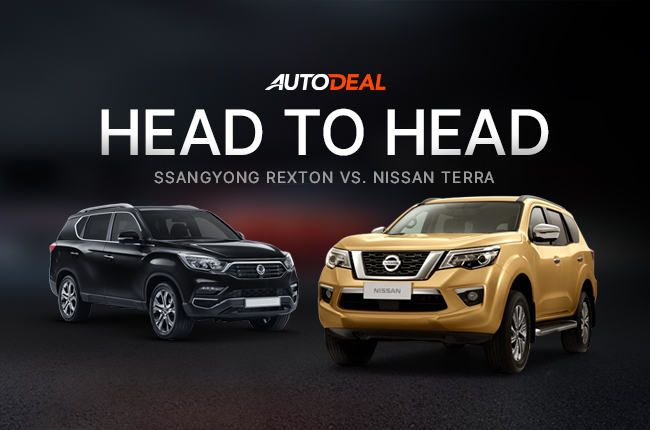 Here are two SUVs with comparable builds, power outputs, and suspension setups. Both of them come with ladder-frame chassis and diesel engines mounted in the bays so it’ll be natural to compare these two. The Nissan Terra and the SsangYong Rexton are going head to head, spec for spec, and spring for spring in this comparison, and the results may surprise you.

The Nissan Terra is one of the most comfortable midsize SUVs in the market today, but the SsangYong Rexton is looking to challenge the Nissan on its own terms, with its own special inclusions that include a rather luscious interior. Let’s get into it. 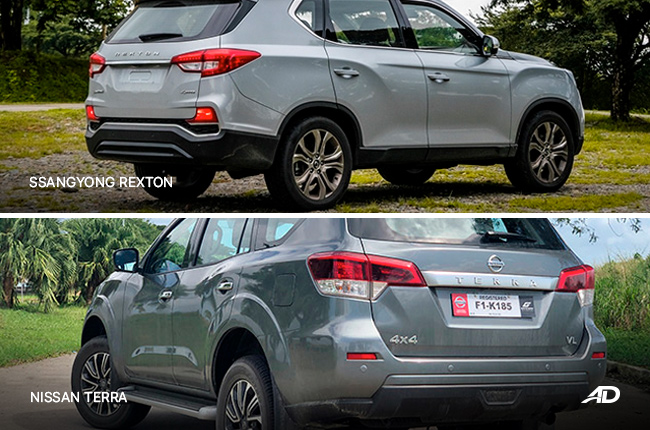 Both cars are exceedingly good looking. Both exude masculine lines and similar proportions that play well with the class they compete in. Both units in their top of the line trims have LED headlights with DRLs, as well as stylish grilles that house the brand’s logos.

There’s isn’t much to say, other than they’re very similar. The Rexton is a less common sight on the road, so its uniqueness and rareness may get you, the Nissan Terra is conventional cool, at least compared to the South Korean SUV. Also unconventional for the modern era, are the 20-inch chrome wheels on the Rexton, which could be a love it or hate it kind of thing. Admittedly, the Terra’s smaller 18-inch set is easier on the eyes.

The rear of the Rexton is a tad more conservative than the Terra. Certain liberties were taken by Nissan while designing the rear end of this midsize, opting for more cuts and curves compared to the Rexton’s rather straightforward look.

Overall, the Terra is the more good looking thanks to its conventional design. The SsangYong is definitely a looker, no doubt, but the large chrome wheels are a little off-putting – at least in our books. There is no doubt that the interior of the Rexton is leagues ahead of the Terra’s in terms of adornment. SsangYong brought their A-game when it came to these two. The materials are on point, and so are all of the materials used by SsangYong to complete what is arguably a more eye-catching two-tone look. A lighter brown and black with light brown stitching set this SUV’s interior apart from the rest. The quilting on the seats, door cards, and the dash are all executed nicely. Meanwhile, the Terra has a chocolate brown and black interior, that’ll do the job and not get too scratched up over time. Less piano black plastics can be found in the Terra, the Rexton has more of this scratch-prone material on more areas of the cabin – it's a minor gripe.

Nissan placed one-touch tumble buttons for the rear seats, allowing the middle row seats to be tumbled with only one action. The SsangYong doesn’t have this feature, it instead opts for heated and cooled seats in the front, and heated seats for the middle row. Just like their interiors, the Rexton focuses on comfort, while the Terra’s just gets down to business.

There is more craftsmanship in the Rexton. The Terra is oriented towards durability and longevity. Perhaps each of these interiors come with their own pros and cons, but the more impressive of the two is the SsangYong Rexton, hands down. Both cars feature Apple CarPlay and Android Auto, front and rear parking sensors, a digital and analog gauge cluster, as well as a dual-zone climate control system. These additions are standard for top of the line variants and can be found here.

The main differentiating factor that the Terra has against the Rexton is the Nissan Intelligent Mobility around-view monitor. This system of cameras allows the driver to see everything around the car for parking or a tight crawl on the road. The Rexton gets no such tech. Perhaps SsangYong poured all of its money into the refinement and essential features. This can be evidently seen on the gauge cluster. Both of these vehicles come with the same layout, but the Rexton takes the cake in this area. The LCD screen in the middle of the two gauges is in an atypical shape. It’s unlike the Terra’s since Nissan has opted to place a rectangle into the cluster. The gauges of the Terra may also have a chapter ring to add depth, but the Rexton’s just looks a bit more upscale. SsangYong also allows more customization options as compared to the Terra.

These two SUVs are identically matched when it comes to safety in the event of a crash. The Terra and Rexton come with a total of six SRS airbags. These units include driver and front passenger, side and curtain airbags. Both vehicles come with ABS with EBD and brake assist, traction control, hill start assist, hill descent control, parking sensors, immobilizer, and alarm.

A few key differences that the Terra has over the Rexton are the blind-spot monitoring systems, around-view monitor, and lane departure warning. None of these items can be found on the Rexton, sadly.

The Nissan Terra is one of the few vehicles being sold in the country with a five-star rating from the ASEAN NCAP. It has that under its list of accomplishments. The Rexton, however, has not been brought in for testing just yet. 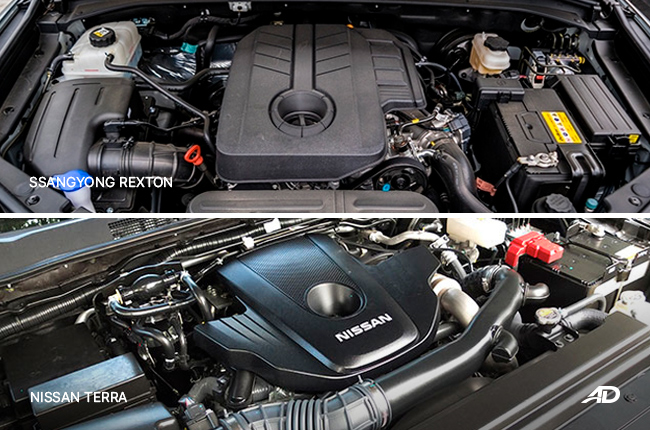 Both SUVs are capable performers with 4x2 and 4x4 options. The power figures are also similar between the two models. For the Terra, it has Nissan’s 2.5L diesel engine with 190 hp and 450 Nm of torque. The Rexton is no slouch as it has a 2.2L diesel with 181 hp and 420 Nm of torque – all of this is in a mill that is smaller in its displacement.

NVH levels are low and very tolerable in both models. However, the SsangYong is slightly better in this regard, thanks to the refined 2.2L engine. Noise under the hood is minimal in the Rexton, the same can be said for the Terra, but to a slightly lesser degree.

Ride comfort in both of these vehicles is very comparable, with the Terra’s ride being slightly better than the Rexton’s. Thanks to the independent multi-link rear suspension setups that can be found in both vehicles, occupants won’t be jostled about too violently as compared to other SUVs.