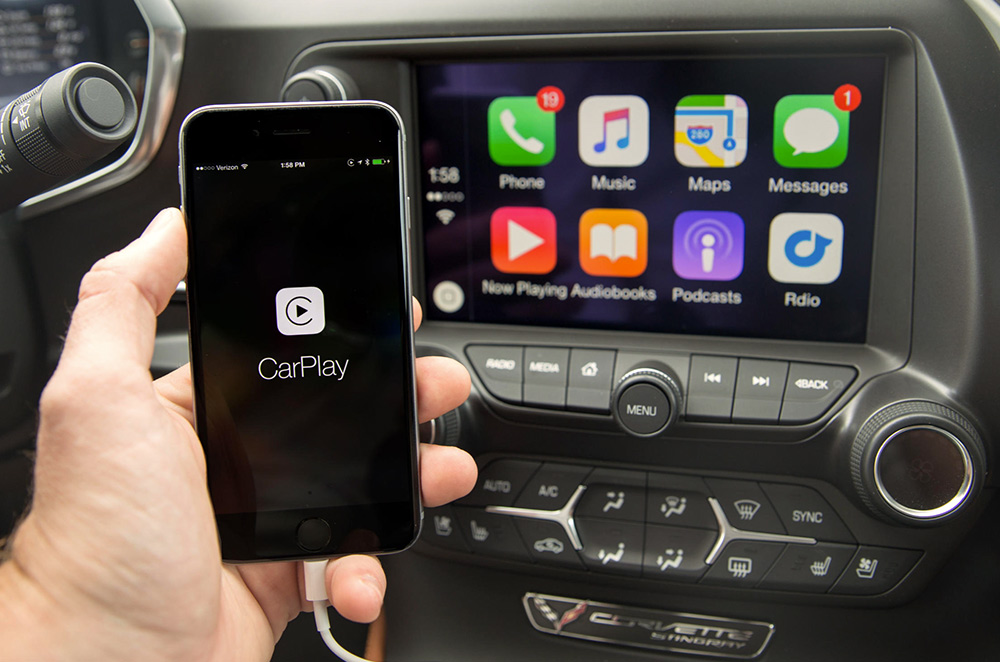 Entertainment systems in vehicles have evolved a lot since their early introduction as just radios. Now they come in the form of large touchscreens that crown the dashboard of almost any vehicle that help add aesthetic value to the vehicle, even more so if the infotainment system itself comes with a crisp display and a responsive interface. Around 80 percent of brand new cars in the Philippines have touchscreen infotainment systems, which makes this technology a major selling point among car buyers.

However, not all infotainment systems are alike – some have Apple CarPlay. As an iPhone user myself, having to drive different cars week by week made me realize the importance and convenience of Apple CarPlay. It’s elating. Addicting, even, not to mention that it’s safer since you aren’t distracted with your phone.

With that in mind, we answer the question, how does Apple CarPlay work? What are its advantages? Here is a quick guide to help you out from the people who enjoy using the feature.

Related: What cars in the Philippines have Apple CarPlay? 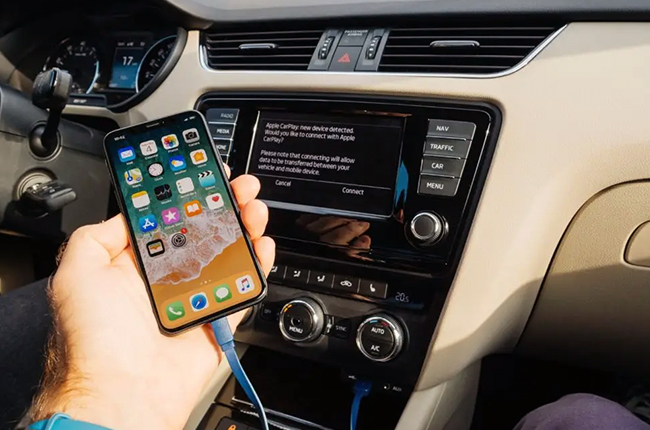 Regular head units that don’t come with Apple CarPlay will normally need you to connect your phone via Bluetooth for you to utilize all of its available features. This process can sometimes be cumbersome especially if the user interface is confusing and if there are many menus that you need to juggle through to get to where you want to be.

With Apple CarPlay, on the other hand, the experience has been simplified. All you need is your iPhone, a lightning cable, and have your Siri switched ‘On’ and you are good to go. Just plug your phone into the USB port that has a connection with the head unit and a prompt will ask you if you want to use Apple CarPlay even when your phone is locked.

After you acknowledge that you do want to use the feature, the infotainment system will display a familiar interface that is similar to what you see on your iPhone. It will also reflect your iPhone’s apps that are compatible with Apple CarPlay. Of note, Apple CarPlay is available on all iPhone 5 and later models with at least iOS 7.1.

Siri at your fingertips 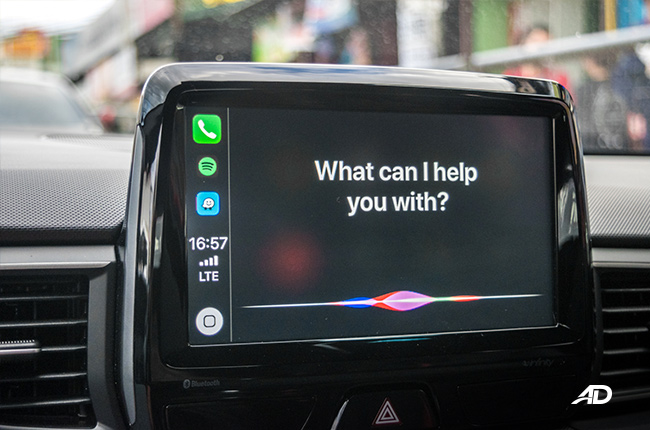 Having Apple CarPlay functionality in your vehicle will also give you access to Siri, Apple’s voice assistant that can do basic tasks on your phone via voice commands. It’s also one of Apple CarPlay’s strengths since it’s integrated with the feature.

Saying “Hey, Siri!” will prompt the female voice assistant. There are things that you can ask her that will get an answer, like “where’s the nearest restaurant?” or “where’s the nearest gas station?” You can also make a call by telling Siri to “Call <the name of the person in your phonebook>.”

It is important to remember that Siri can only understand certain languages such as English, Spanish, Thai, Italian, among others. This feature can be toggled via your iPhone’s settings. Unfortunately, there has yet to be a patch where Siri can understand Filipino. 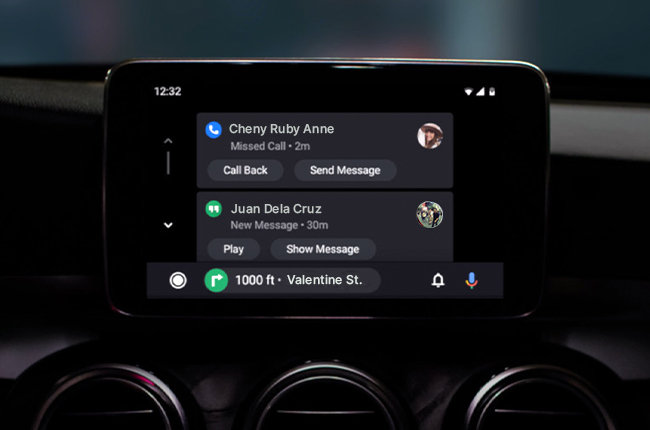 Answering or making calls with an Apple CarPlay equipped head unit is pretty much the same with regular 2-DIN or 1-DIN Bluetooth-equipped models. This can still be done via the buttons on the steering wheel or via the touchscreen itself. What differs with Apple CaPlay is that it acts as an extension of your iPhone, it will display the name of the caller if he/she is registered in your phonebook. Your favorite contacts as well as your recent activities will also be synced to the infotainment system via Apple CarPlay.

On the other hand, making calls is a cinch with Apple CarPlay as you can use Siri to find the person in your phonebook. That’s pretty nifty, safe, and undistracted when you’re on the road. Another advantage that Apple CarPlay has over regular head units is that it can read text messages back to you. Opening the Messaging app will prompt her to do so and you’ll be asked if you would want to reply or not. If you choose to reply, you can dictate the text message back to Siri and she will “type” the whole thing for you. She will also re-read your message before sending it.

However, language is a limitation, so make sure that you’re sending an English text message (or any language you set). You should also say the punctuation marks out loud, so a message such as “Okay. Where do we meet?” would need to be dictated as “Okay. Period. Where do we meet Question Mark.” Before iOS version 12, Apple CarPlay only has Apple Maps as its navigation app. Good thing, iPhones with iOS version 12 and above add Google Maps and Waze into the interface.

With this update intact, Apple CarPlay now displays the Waze map on the infotainment system instead of your phone. This would render smartphone cradles useless, and that’s a good thing. Take note, though, that Siri doesn’t work with Waze and Google Maps, so if you want to ask Siri for directions, it will use Apple Maps instead. This feature gives the user the ability to use their preferred navigation application without any muss or fuss about it. 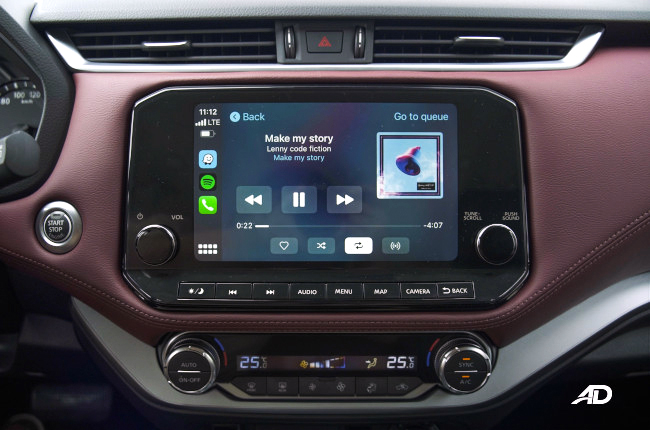 Another nifty feature of Apple CarPlay is the integration of Spotify and other third-party music apps, on top of the pre-installed Apple Music. This allows you to toggle and choose your music via the head unit instead of your smartphone.

However, Siri doesn’t work with the third-party music apps, too, so you would need a subscription with Apple Music if you want to use voice prompts to find your favorite jams.