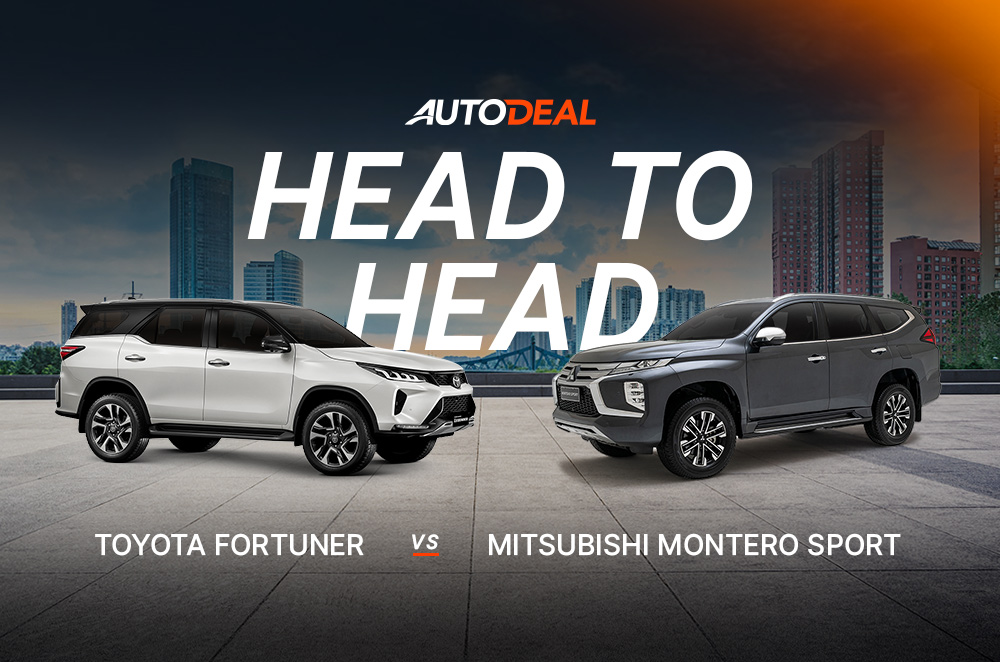 When it comes to the competitive 7-seater diesel SUV segment in the Philippines two models standout, the Mitsubishi Montero Sport and its long-time rival the Toyota Fortuner. With the Toyota SUV getting a recent facelift along with the additions of new features, we put them head to head to see which one will come out on top. The Montero Sport brings with it a futuristic new design, while the Fortuner has stuck to its guns with a revised facelift along with an all-new look as well. These tech-packed SUVs have certainly raised the bar when it comes to their respective segment, and with that said onto the head to head. 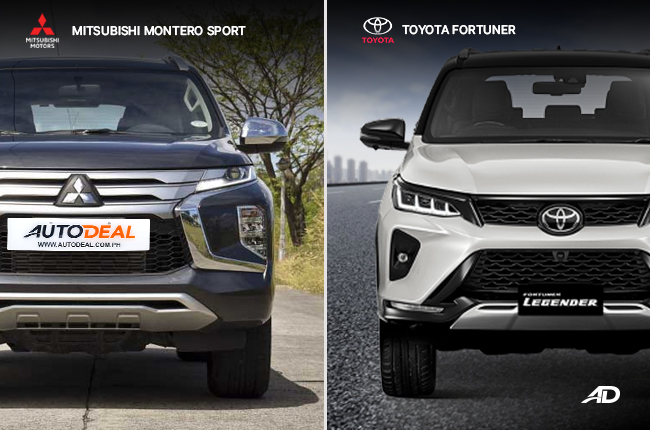 When it comes to the exterior design, it can be a point of contention for some as the Montero Sport comes with a bold new Advanced Dynamic Shield design. Love it or hate it, it’s the new face of the popular 7-seater SUV. The refreshed look moves certain lighting elements from the top headlights and brings them down to the bumper for a new set of lights.

The Toyota Fortuner, on the other hand, brings with it two new faces to its refreshed model. A new and sportier look goes to its top of the line LTD variant, while the rest of the trim levels get a revised look that harks back to the pre-facelift model.

When it comes to lighting elements both vehicles are about even as both come with a complete set of LED lights. These can be found with their headlights, tail lights, and daytime running lights as well. It is important to note, however, that the Toyota SUV comes with Bi-Beam LEDs as standard for its entry to mid-level variants, while its LTD model comes with split-type LEDs.

Where the two differ slightly is when it comes to wheel sizes, as the Montero Sport comes with two design options with both coming in 18-inches in size. The Toyota Fortuner, on the other hand, can be had with 17-inch wheels for its entry-level model and 18-inch wheels with a different design for its higher grades.

This is ultimately a split decision, as the Fortuner has new and old styling at the same time in the same lineup. With the LTD variants, you get a very radical new face for the front clip while the G to Q variants all are familiar but slightly updated. For the Montero, you can say the same, where it is mostly the same, but tweaked. Though, the beauty about it is that it's a rather impressive redesign when it was first introduced, and you can say that it's striking. For this category, however, we have to give it a tie since both models have their pros and cons. The team is divided as some prefer the Montero Sport, while others prefer the Fortuner LTD, but even fewer will go with the Fortuner G, V, or Q variants, at least in the office. 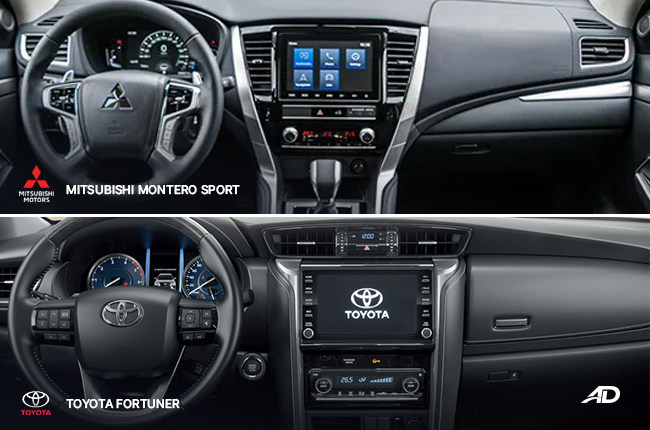 As these models are updates to their predecessors, the interior cabin layout has not changed much between the two vehicles. There are, however, slight differences when it comes to accents found in the interior, as the door cards and a few dashboard accents have been changed. Where seating material is concerned, both can be had with cloth or leather seats depending on the model.

Where a clear difference can be seen is when it comes to their interior technology. The Toyota Fortuner comes with a choice of a 7-inch or 8-inch display depending on the variant. Whichever model you choose it will come with Apple CarPlay and Android Auto capabilities as standard. Of note, the Toyota SUV also comes standard with a 6-speaker sound system for the majority of its variants, while the range-topping model comes with a 9-speaker JBL sound system.

The Montero Sport, on the other hand, comes with an 8-inch infotainment system as standard for its middle to high-end models. These will automatically come with Apple CarPlay and Android Auto functionality as well as with a GPS Navigation system. However, it is important to remember that the entry-level Montero Sport does not come with these smartphone mirroring functionalities, as it can only be had with Bluetooth and USB compatibility. When it comes to the sound system, the entry-level Montero Sport only comes with 4-speakers while the middle to upper variants come with 6. This puts the Japanese SUV at a bit of a disadvantage especially if you want a little more thump to your favorite tracks. The Montero Sport also comes with a 220V socket for its GLS variants and up. A handy feature to have especially when you want to charge bigger devices.

When it comes to convenience features both vehicles are again about even as both top trim levels come with a 360-degree camera along with a power tailgate. Where they differ slightly is when it comes to the other variants, as they can be had with reverse sensors along with reverse cameras. It is important to note that the Fortuner comes with 2 sonar sensors at the front as standard for all of its variants and that the 360-degree camera is also present in the V trim and higher.

Where the Montero Sport does makeup ground is with its Mitsubishi Remote Control Function. This lets the user open and close the tailgate, lock and unlock the doors, start the engine, and open the windows all from their smartphone.

When the Montero Sport was first launched, it was already well-equipped in its segment then Mitsubishi Philippines gave it a refresh that further enhanced the feature-set on the SUV. It took Toyota a while for the Fortuner to catch up, but now that it has, it's one of the better equipped models in the market in its top of the line trim. 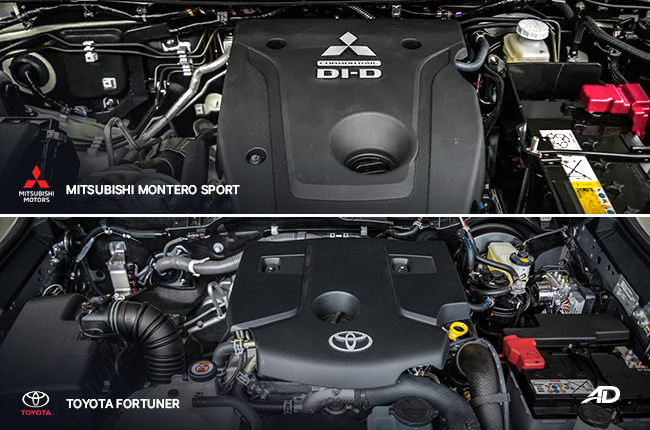 The Mitsubishi Montero Sport, on the other hand, also comes powered by a 2.4-liter turbo diesel engine, however, it makes 176hp and 430 Nm of torque as standard for all variants. Transmission options come in the form of a 6-speed manual or an 8-speed automatic. While the Montero Sport does come in with a deficit when it comes to the 2.8-liter motor of the Toyota SUV, it does overpower the middle and lower trim levels of the Fortuner. Comparing the two 2.4-liter motors, the Montero comes out with an advantage of 26hp and 30 Nm of torque.

In terms of outright power, the Fortuner now takes the cake with its top of the line trim. However, the Montero, if you opt for the lower variants or the higher variants, will come with the same engine, which means that its power is rather good regardless of which variant you go for. The Fortuner, on the other hand, with its lower trim levels will be stuck with the 2.4-liter diesel engine, which is still good, but it might not be as grunty as the Montero's. The safety technology between the two varies greatly between the two 7-seater SUVs. Comparing their respective entry-level models reveals that the Montero Sport GLX only comes with 2 airbags, while the Fortuner comes with 4 as standard for its G variant. This is on top of the standard safety features such as ABS with EBD, stability control, hill start assist, vehicle stability control, and ISOFIX tethers.

The Toyota Fortuner, however, does come with an ace up its sleeve in the form of Toyota’s Safety Sense Technology. This grants the SUV special safety features such as a pre-collision system, a lane departure alert system, and adaptive cruise control just to name a few.

However, the Montero Sport is no slouch either when it comes to its safety features as the GT4WD variants come with an ultrasonic misacceleration mitigation system, forward collision mitigation, rear cross-traffic alert, and a blind spot monitoring system.

So, in terms of safety, both are pretty neck and neck, but Toyota's features are geared more for convenience and prevention, while Mitsubishi's is really for prevention and safety. Both have their own merits. Which matters to you will depend, and both get top marks in terms of safety kit, though a slight advantage will be to be for the mid-level variants, where Mitsubishi has more value, but that advantage is lost in the lower-level variants. 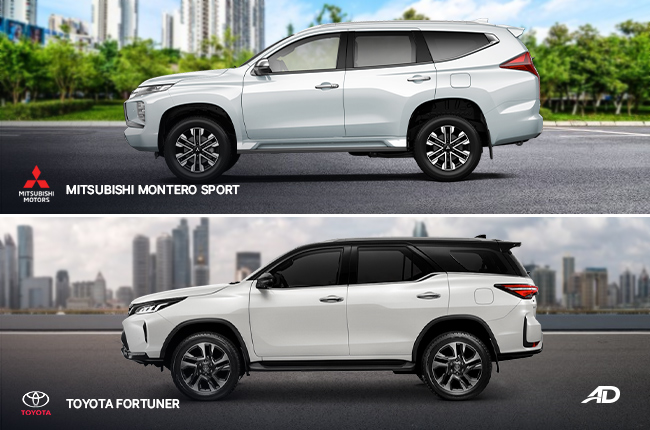 Where things get interesting between these two diesel-powered 7-seater  SUVs is when it comes to price. A quick look at the Toyota Fortuner’s price list reveals that the vehicle is more expensive at its entry-level variant compared to its Mitsubishi competitor, coming with a starting price of P1,635,000. This raises the barrier to entry for the Toyota SUV making it the more expensive option as the Montero Sport GLX can be had for P1,565,000. That’s a gap of P70,000 between the two entry-level models.

Moving on to the higher end models and a quick look at the Mitsubishi Montero Sport’s price list reveals that it is the more expensive vehicle at its GT 4WD trim level. Its top of the line model comes in at P2,450,000, while the Fortuner LTD comes in with a price of P2,414,000. This represents a difference of P36,000 between the two variants making the Toyota SUV the more affordable vehicle. While both 7-seater diesel SUVs are on a similar footing when it comes to features and power, the winner still goes to the Fortuner as it edges out its Mitsubishi rival in one category. When it comes to the higher grade 2.8 models of the Toyota SUV it beats out its Montero rival, however, it is still important to remember that the 2.4-liter motor from Mitsubishi is standard across its lineup which gives its lower and middle-tier models an advantage. Taking pricing into consideration the Fortuner also has a slight edge over its rival at least in terms of the top-of-the-line model, as it comes P36,000 more affordable. With that said If you want to get your hands on any of the two 7-seater SUVs then we highly recommend using our Buy Online function. This will make reserving the unit you want to go as smoothly and as quickly as possible.