The Toyota Fortuner is the best-selling midsize SUV in the Philippines. This ladder-frame vehicle has been around since the early 2000s and has since become a household name thanks to its rugged platform and tested durability thanks to its robust platform and strong brand support. The second-generation model has been consistently topping the sales chart, not only in its segment but for the entire Philippine automotive industry as well. Fast-forward to October 2020, and the Toyota Motor Philippines finally brings in the updated version of the midsize SUV.

The Toyota Fortuner is a body-on-frame SUV that rides on the IMV platform. The Hilux and the Innova share this platform, along with the engine options but with varying outputs. Design-wise, the refreshed version of the Fortuner is sleeker than before, plus, buyers get to opt for a sportier and more rugged LTD trim, which could either be had in a 4x2 or 4x4 configuration.

Inside, the Fortuner can seat seven people, with the option to fold the third-row seats to the side in order to accommodate more cargo. The Fortuner also has the advantage of having better amenities compared to the cars it shares its platform with.

Back in 2016, the Fortuner came at an opportune time for Toyota to cement the nameplate's status as the best-selling SUV in the Philippines. This generation's launch introduced three engine options to the market, with a base 2.7L gasoline engine and newer 2.4L and 2.8L diesel engines. This was met with a redesign that Toyota Motor Philippines stated was “a more distinctive, sleek, and powerful design while improving its performance.”

Toyota Philippines launched the facelifted version of the Toyota Fortuner on October 17, 2020. It comes with two new faces thanks to the addition of a new top-of-the-line variant known as the LTD trim, which features a number of rugged reinforcements.  A separate facelift was also brought to the Philippines for the lower variants of the SUV along with updated 2.4-liter and 2.8-liter engine options. Following the update, Toyota removed the gasoline 2.7-liter engine option in the Fortuner lineup. On a related note, the 2.7-liter was also removed from the Toyota Innova lineup following an update for the 2021 model year of the MPV.

Up to the current generation, the Toyota Fortuner still uses the brands’ IMV platform, which is a body on frame chassis with a longitudinal engine layout. In its baser 4x2 trims, the SUV is rear-wheel drive only. Top-of-the-line variants will come with a 4x4 system that is switchable via a dial in the cabin. It is also worth noting that only variants with 2.8-liter engines will get the option to have a 4x4 system. The 2.4-liter diesel engines, on the other hand, can only be had in rear-wheel-drive. Since the new model, Toyota has axed the 2.7-liter gasoline options for the SUV. Now, the nameplate only comes with either a 2.4-liter or a 2.8-liter diesel engine. The power and torque output of the 2.4-liter 2GD-FTV is at 148 hp and 400 Nm of torque, while the larger 2.8-liter 1GD-FTV gets 201 hp and 500 Nm of torque which are figures that are markedly higher than before. Both power plants are inline-4 cylinder engines with 16 valves dual overhead camshafts that feature a Variable Nozzle Turbo with an intercooler located in the front of the vehicle. There is only one variant in the lineup available with a 6-speed manual transmission. All other trims of the midsize SUV will come with a 6-speed automatic gearbox.

As for chassis, the Fortuner is available with a double-wishbone front suspension, and a multilink system in the rear. Both suspension types are fully independent and promise a better ride. Apart from that, you can expect ventilated disc brakes all around, along with wheels that are either 17-inches in size for the G variants, or 18-inches for the V variants and up. The LTD trim gets its own unique set of 18-inch wheels thanks to a machine-cut finish.

For top-of-the-line 4x4 trims, the Fortuner features an auto disconnect differential and differential lock along with downhill assist control to go with the system.

The Toyota Fortuner in its G Variant rides similarly to the pre-facelift model in 2016. Still on a ladder-frame chassis, the ride comfort of the new 2020 model is passably good over rough roads and less than stellar pavement. Engine performance is also good, with the 2.4-liter diesel engine providing adequate amounts of torque at the lower rev ranges. The 6-speed automatic transmission also performs smoothly with imperceptible gear shifts, but the highlight of the Fortuner is its stellar NVH insulation, which does not allow much noise to penetrate the cabin.

Since the model’s facelift, the Fortuner has been equipped with a load of new tech features that make the midsize SUV truly modern and fitting to take on its rivals in the segment. Toyota has equipped it with a 7 or 8-inch touchscreen infotainment system with Apple CarPlay and Android Auto that is standard for all models. For the G variants of the Fortuner, a backup camera comes as standard, but V variants and up will get Toyota’s Panoramic View camera. Top-of-the-line trims of the Fortuner will receive a 9-speaker JBL audio system to enhance the listening experience. Apart from that, all models will receive proximity sensors as standard. V variants and up to get keyless entry with push start as standard, along with automatic climate control, cruise control, wireless charging, and USB ports.

Other notable additions to the spec list of the Fortuner in its top-of-the-line LTD and Q trims include Toyota’s Safety Sense, which includes adaptive cruise control, pre-collision warning, blind-spot monitoring, and lane departure warning.

There are two exterior configurations for the Toyota Fortuner. G, V, and Q variants in the lineup will get an updated but similar look to the previous model. These models will sport new grilles and bumpers for the front and rear as well as an updated rear. Still retained and now standard throughout the lineup is the Bi-beam LED headlamps that were only previously found in the top-of-the-line models prior.

Meanwhile, the more premium LTD variants will get the all-new look of the Toyota Fortuner. Toyota’s new split-type LED headlights. These new units also feature sequential turn signals that are also LED, giving the LTD a more premium touch. Also only for LTD variants, the rear also gets sequential turn signals. As for the body work, the new Fortuner LTD gets a unique bumper and front-end look that is more angular than the normal G, V, or Q variants in the lineup. The more aggressive look is further enhanced by 18-inch machine-cut alloy wheels that the baser trims don’t have.

Interior upholstery for the new Fortuner include fabric, leather, and two-tone leather options. Fabric seat material is available for the G and V variants, while the more premium Q trim is the only other option with leather seats. Meanwhile, the top of the line LTD variants get a leather interior with maroon accents adding more depth and a touch of color to the cabin. Power seats are available in the Q variants and up, but all models come standard with a 7-seat occupancy.

Other features and adornments that are limited to the LTD variant include ventilated front seats and Galaxy Black trim pieces, while upper variants will get paddle shifters more buttons on the steering wheel and a leather wrapped steering wheel as well as an auto dimming mirror, a cooled compartment, and even LED bulbs for the dome, map, and other auxiliary interior lights. View the most compared cars versus the Toyota Fortuner 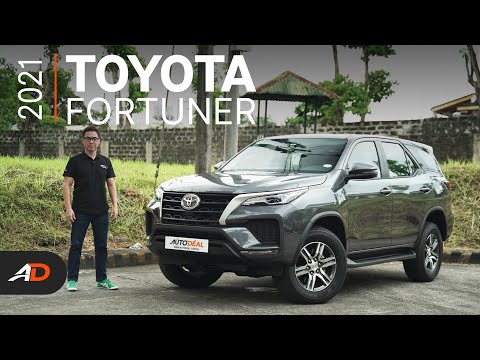 Read reviews from verified car buyers and find out from real owners what it's like to own Toyota Fortuner.

Does the Fortuner come with a backup camera?

For the 2021 model year, all new Fortuners will come with a rearview camera as standard. From the V variant and up, you get a Panoramic-View camera, otherwise known as a 360-degree camera.

Are there models of the Fortuner with a gasoline engine?

For the latest refresh of the Fortuner, there is no more 2.7-liter gasoline engine on offer in the model lineup.

Does the Fortuner have a moonroof?

The Toyota Fortuner in the Philippines doesn't have a moonroof nor a sunroof, even on its top-spec variants.

Does the Toyota Fortuner has turbo?

All diesel variants of the Toyota Fortuner are turbocharged for added oomph as needed by the off-roading SUV.

Is a new Toyota Fortuner coming out?

The new Fortuner was launched on October 17, 2020, which include a facelift and an all-new LTD model that will be the new top of the line model for this generation. Other improvements will include an uprated 2.8-liter turbo diesel engine and an uprated 2.4-liter turbodiesel engine for the lower variants of the SUV.

Is the Toyota Fortuner a luxury car?

The Toyota Fortuner isn't a luxury vehicle, primarily because of the materials used inside its cabin. The Land Cruiser Prado, however, is similar to the Fortuner in size but with better interior amenities.

Is the Toyota Fortuner a 4x4?

The Toyota Fortuner is available in both 4x2 and 4x4 drivetrain layouts, with the 4x4 reserved for the LTD variant.

You can request quotations simultaneously from multiple Toyota dealerships. Select your preferred dealers from the list below.

Get Notified for Toyota Fortuner Alerts