The Toyota Fortuner is one of if not the most popular ladder-frame SUVs in the Philippines. Anyone who’s driven on the streets of Metro Manila knows about this model and the reputation it holds. Released back in the early 2000s, it was a smash hit the moment it arrived, drawing the attention of Filipinos who wanted a Toyota SUV without the exorbitant price tag of a Toyota Land Cruiser or Land Cruiser Prado.

It was pricey, but in the middle ground of Toyota’s elite and its entry-level, and it’s safe to say that it was a massive success for the Japanese brand in the country and in the rest of the ASEAN region and beyond.

However, the Fortuner’s popularity is also a gateway to its undoing, or is it? Toyota helped the PPV SUV market grow to a point where there are multiple competitors that offer better and better features, tech, and power. The Fortuner still stacks up, but is it now overrated? Is the car underneath the badge worth it? Let’s pick out a few details.

Just right: The power of power Here’s where we feel that the Fortuner is up to par and worth buying in 2022. The model features a 200 hp-capable diesel engine with 500 Nm of torque. Previously, the model only featured an output of about 180 hp, and competitors were quick to match or even surpass that figure, such as the Ford Everest with its 210 hp and 500 Nm of torque coming from its 2.0-liter bi-turbo diesel mill. Now, however, Toyota has caught up to the Blue Oval in that regard and it’s a mighty engine that delivers power up top and torque down low.

Following the update, everyone was quick to notice the enhanced output coming from the 2.8-liter turbo-diesel engine. It’s not uncommon to see enthusiasts going to a performance shop and asking for a tuner to increase the output of the turbocharger. Emissions, however, will increase if you tuned an older Fortuner, but Toyota was able to keep the emissions down to legal limits while giving the Fortuner over 10 percent more power and torque.

The feat is noteworthy because diesel isn’t exactly the cleanest fuel to burn, and it’s a point in the Fortuner’s favor for us, our verdict here is that it is not overrated when it comes to the engine.

It is also worth mentioning that there is a smaller engine on offer in a 2.4-liter size, but that's not exactly the motor you want if you're going with a premium PPV. Still, the motor returns decent power figures for an entry-level SUV, and it gets the job done, but it won't wow you with its performance. 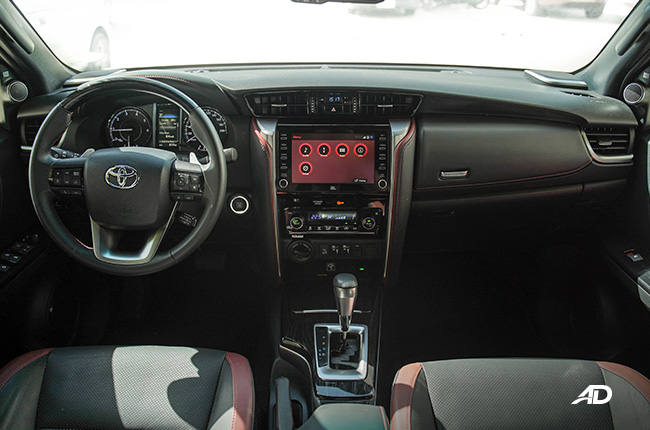 Toyota may tout that the interior got a lot of changes following the update, and the LTD expands upon the premium-ness of the nameplate by adding a sporty touch to it. However, there are quite a few owners and would-be owners who would rather see an all-black interior or a chocolate brown color instead. The pre-facelift’s deep brown upholstery was nearly a one-size-fits-all solution for pretty much everyone. It was subtle enough to remain classy and in line with the luxurious pretenses that SUVs brought while being interesting enough to keep you entertained. Black-on-black is fine and you can still get that in the Q variant of the nameplate, but if you want the LTD’s exterior with a black interior, you’re out of luck.

Toyota only offers the LTD variants with a black and red interior. While there are drivers who are fans of the black and red color combination, the Fortuner isn’t exactly a sporty car to drive even with the extra power that it packs under the hood. No changes were made to the dashboard, so it’s likely that Toyota were pushing for something different for the new models. We wish that the dark brown leather made a comeback, but it is what it is. It’s a bit over the top to dress the interior up with red accents given that it is a car that’s likely to see straight lines and city streets more than twisty roads and race tracks on a daily basis. In short, the red accents are a bit overrated, and we would have preferred the Fortuner to be more understated.

Additionally, the Fortuner’s third-row seats still fold up and out of the way rather than into the floor which results in decreased horizontal space to keep your luggage. Wider items might have to be “Tetrised” into the rear because of this and the model’s competitors seem to be winning because of this quirk because there’s nothing on the side to inhibit the loading of cargo. We wished that Toyota would engineer a workaround for this given that the Fortuner is often used as a cargo hauler by many families. This is one of the main reasons why the Fortuner sells so well. It seems that almost everyone is in agreement that Toyotas are among the most robust machines on the planet. Given good care and maintenance, pretty much nothing can go wrong with a Toyota by chance. Built to last, the Fortuner is no exception, and it also shares its innards and bones with the Toyota Hilux, which is yet another legendary nameplate that is known for its robust nature and its reliability.

The hype is real here, and there are numerous accounts of the Hilux being one tough son of a gun. The Fortuner is also equally as tough and robust. Several people have taken to the trails with the 4x4 variant, be it new or old, and several more still even rely on the model to be a bullet-proof escort or VIP transport vehicle. Even after all the bulletproofing, the engines and chassis still remain tight and ready to work. Then if something does break down, Toyota will be more than willing to supply the parts to repair the damage.

Now, this is a bit of a mixed bag. While the spec sheet does tell you that it has a 360-degree camera, Android Auto, and Apple CarPlay plus Toyota Safety Sense, it’s not all that is cracked up to be. Yes, Toyota’s Safety Sense suite of features is great to use and they work flawlessly, but we wish that the other tech features got a bit of polish.

For starters, the 360-degree camera is not so clear be it in the daytime or the night. It was also a bit hard to access during our testing, and there were times when we forgot that it even had the feature.

Next is the Android Auto and Apple CarPlay system, and the infotainment experience at large. The JBL speakers are a nice addition to the spec sheet, but in practice, we weren’t exactly wowed by the performance of the system. It’s good on paper and in a vacuum, but there are other models that will offer better sound than the Fortuner. Essentially, it’s a middle-of-the-road kind of verdict for the JBL system, not bad but not astounding as the badges would suggest.

Apple CarPlay and Android Auto, however, are welcome additions to the Fortuner after years of just Bluetooth connectivity with prior iterations. The experience is rather smooth, but the screen could stand to use a few more pixels or a few more inches in size to thoroughly modernize the interior. Speaking of screens, the gauge cluster is still the same as before with a few aesthetic changes here and there, but an all-digital cluster might quash any and all complaints associated.

Again, don’t just read the spec sheet and get floored by it. In practice, it’s not that great, and other brands have made strides to seamlessly integrate the tech. Toyota needs a bit more polish in this regard, so take this into consideration if you are eyeing the Fortuner.

So is it overrated?

It’s fifty-fifty. Yes, there are things that keep the Fortuner from being the absolute best in the business, but there are also other things that make it just average in its segment. As we all know, however, there is no stopping the prestige and the image of a Fortuner in the Philippines, and the model is still sure to draw the desire of many Filipinos who are looking for a robust and reliable SUV that ticks most of the boxes.

In some regards, the Fortuner is overrated, but in others, it’s just right. Remember that no car is perfect and one-size-fits-all. However, high resale values continue to keep the Fortuner on the top of many Filipnos’ minds, and upgrading to the latest and greatest model is a cinch thanks to the second-hand market being in love with Toyotas. While a car’s features can be overrated, saving money clearly isn’t, and it’s understandable why so many people flock to the Toyota brand even if the barrier to entry is a bit steep to begin with.