The Ford Everest follows the Ranger into the next generation with an all-new design and a robust selection of advanced tech and safety features. Much like its pickup truck sibling, this seven-seater Ford midsize SUV gets a bolder front fascia marked by C-clamp headlamps and a distinctive front grille. With a wider stance from an increased track and wheelbase, the Ford Everest looks more mature and refined in its latest iteration.

Inside, the Everest comes well-equipped with features such as a standard eight-inch digital instrument cluster with a 12-inch option and a 10-inch or 12-inch SYNC 4A touchscreen display. There’s even a 360-degree camera on the top-of-the-line Bi-Turbo Titanium+ model. The same variant exclusively comes with Ford’s Advanced Driver Assist Technology.

The next-gen Ford Everest debuted globally in March 2022. It launched first in Australia and Thailand followed by other Southeast Asian countries.

Ford Philippines officially launched the all-new Everest on July 28, 2022. The automaker made four trim levels and five variants available, including the Trend, Limited, Sport, Titanium+ and Bi-Turbo Titanium+. At launch, the Ford Everest had a starting price of P1,799,000 for the base model Trend.

The Ford Everest body-on-frame midsize SUV rides on Ford’s T6 platform that is shared with the Ranger midsize pickup truck. The Everest is available in either rear-wheel-drive or with a 4x4 configuration, depending on the variant.

Ford Philippines has brought in two engine options for the Everest. The first is a 2.0-liter Single-Turbo EcoBlue diesel engine with 170 hp at 3,500 RPM and 405 Nm of torque from 1,750 to 2,500 RPM. This power plant shifts exclusively with a six-speed automatic transmission.

The more powerful motor comes in the form of a 2.0-liter Bi-Turbo EcoBlue diesel engine that delivers 210 hp at 3,750 RPM and 500 Nm of torque from 1,750 to 2,000 RPM. This engine sends power to all four wheels with a 10-speed automatic transmission. This powertrain comes with an electronic rear-locking differential and is exclusive to the Bi-Turbo Titanium+ variant.

Advanced tech features have become a staple of the midsize SUV segment. The Ford Everest has always led the pack with class-leading technology, and the same is true for this generation. Ford has equipped this model with a standard eight-inch digital instrument display that goes up to a 12-inch unit on the top-spec model. Plus, there’s a 10-inch or 12-inch SYNC 4A touchscreen infotainment system and standard eight speakers. The 12-inch center display also features advanced voice recognition.

The Titanium+ models take things to the next level with ambient lighting and a 230V inverter, with the top-spec Bi-Turbo Titanium+ getting a 360-degree camera as well as Ford’s Terrain Management System.

The Ford Everest takes a major departure from its predecessor with a more rugged, squared-off look that echoes the new Ranger. It gets a similarly redesigned front end with an aggressive grille finished in body color, gloss black, or chrome. There’s also the C-clamp headlights that come available as reflectors, multi-reflector LEDs, or matrix LEDs, depending on the trim level.

The next-gen Everest’s track and wheelbase has been increased by 50 mm each, providing the seven-seater SUV with a wider and more imposing form. The Sport trim level and above get LED tail lights, LED fog lights, and power folding and power-adjustable side mirrors.

At the sides, a pair of side steps make access easier for all seven passengers. Wheel options include 18-inch alloys for the Trend and Limited models and 20-inch alloy wheels for the rest of the lineup. There are also roof rails and a rear spoiler for an even sportier ride. The hands-free liftgate helps owners access the cargo area with ease and efficiency. Meanwhile, the panoramic moonroof comes exclusively to the Titanium+ models.

Ford has redesigned the Everest’s interior as it did with the Ranger. Crafted with versatility in mind,  the interior can fit a variety of use cases, whether it’s for daily family needs, city driving, or off-roading. Ford has also moved most of the button controls to the central touchscreen, giving the Everest a much cleaner and more sophisticated interior.

The Sport models and above get a mix of leather and synthetic leather with variant-specific styling. The same variants get eight-way power-adjustable front seats and power folding third row seats. As with the previous generation, the Ford Everest seats seven people.

The next-gen Everest has been made safer than ever, thanks to advancements in its feature set and active safety tech. The Everest Sport comes standard with seven SRS airbags, ABS with EBD, ESP with traction control, hill launch assist, roll over mitigation, an electric parking brake, front and rear parking sensors, a security alarm system, a rear view camera, and cruise control. An electric brake booster comes exclusively to the top variant. View the most compared cars versus the Ford Everest 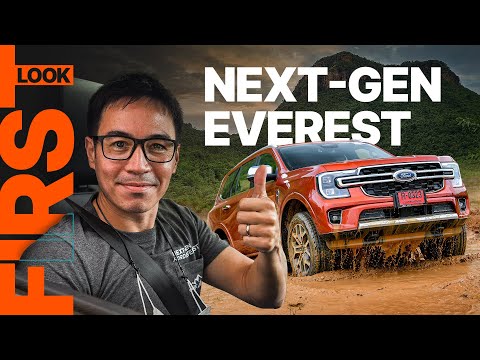 Read reviews from verified car buyers and find out from real owners what it's like to own Ford Everest.

Does the Ford Everest have a sunroof?

Only the Titanium variants with Premium package come with a dual-panel moonroof.

What is the towing capacity of a Ford Everest?

Ford isn't specific with the Everest's towing capacity. However, Ford's website says that it should be able to tow up to 3,000 kilograms, while payload and roof load capacities are at 750 kilograms and 100 kilograms, respectively.

How much does a Ford Everest weigh?

How many seats does a Ford Everest have?

All variants of the Ford Everest comes with three rows and seating capacity for seven people.

What's the most affordable Ford Everest in the Philippines?

Get Notified for Ford Everest Alerts