The crossover segment in the Philippines has been booming over the past couple of years. More and more entries are flooding the market all trying to build a niche for themselves while trying to get a piece of the market share pie. Kia entered the game fairly early with the introduction of the Stonic, a sub-P1-million crossover that comes feature-packed and with a style the brand thinks will be iconic. Toyota not wanting to miss out on the fun also brought in its subcompact crossover in the form of the Raize. The new vehicle brings with it a set of new features and the brand some of the brand’s latest safety technology as well. With that said, we compare both vehicles in terms of their specifications to find out which one will come out on top and which one you should get. 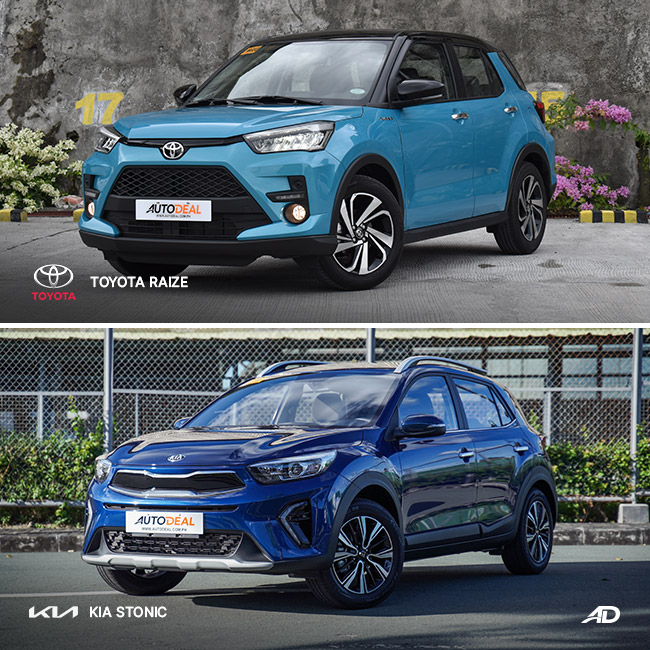 In terms of design, both the Kia Stonic and the Toyota Raize take two very different approaches. The Raize goes for a boxier and more angular which gives it an SUV-like design. You get a squared-off front, a large grille, daytime running lights found on the bumper, and a pair of sleek headlights. At the back of the Toyota crossover, you get an equally boxy rear with LED taillights.

In the case of the Kia Stonic, it goes with a much curvier approach to its design. You get a sloping hood that terminates in a faux grille which is flanked on either side by projector halogen headlights. In case you were wondering how the Stonic takes in its air for cooling, this is predominantly done by the lower grille found on the bumper. Moving on to the back of the South Korean crossover and the curves continue to the hatch. Unlike its Toyota rival, the Stonic comes with bulb-type tail lights instead of the LED array on the Toyota.

For this category, we will give it to the Toyota Raize as it comes with better lighting equipment as the top-of-the-line variant comes with LED headlights. In the case of the Kia Stonic, we have to commend it for having projector halogen headlights as standard for all variants, while the Raize only has halogen headlights for its lower models. Style is subjective, however, and some may prefer the look of the Stonic over the Raize. However, from a purely practical standpoint, the Raize is better equipped to tackle low-light situations. 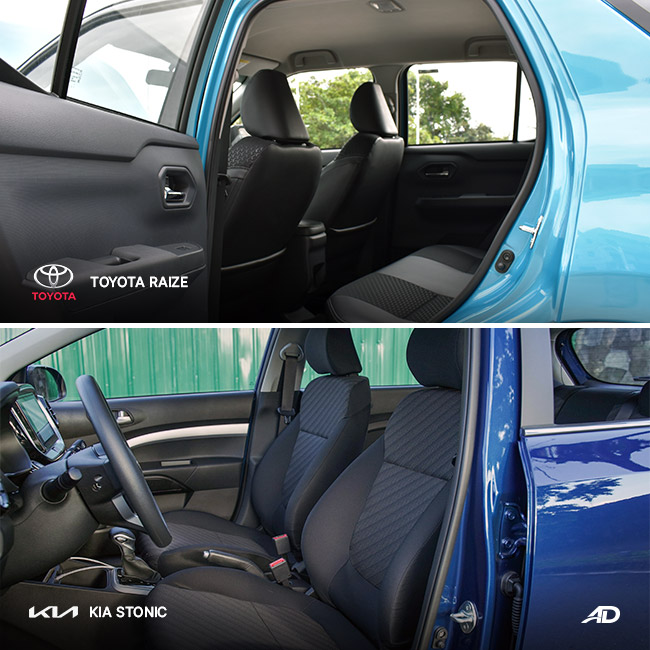 When it comes to the interior of these two crossovers the materials chosen are pretty similar. Where they differ is when it comes to the design. The Raize continues its angular exterior look and transcends it into the cabin of the vehicle. You get a layered dashboard with angular air vents along with easy-to-use controls. One thing we do have to note is that the seats of the crossover are very comfortable as it has enough give to firmly hold you in place but just enough wiggle room as to not making fatiguing to sit in. We also have to mention that the Raize has a leather and fabric seat combination for its range-topping model which is a plus in our books.

The Kia Stonic goes for a more minimalistic approach with smoother lines for its interior. There are soft-touch materials found in the vehicle, but the majority of the plastics found in the cabin lean more towards the durable side. Just like its Toyota counterpart, it also comes with single-zone automatic climate controls. A thing to note with the Stonic is that it doesn’t come with a fully digital display. It still has analog gauges for its speedometer and for its tachometer which can be a breath of fresh air for those who don’t want too much tech in their vehicle. While the Raize has a leather seat option, the Kia Stonic, unfortunately, does not have this feature available.

With that in mind, we give this category as a tie as it ultimately boils down to your personal preferences when it comes to interior looks and cabin comfort. While the Raize does come with the advantage of having leather seats, we have to let that advantage go on a technicality as it isn’t a full leather seat. As for its comfort, what may seem comfortable for us may not be the same for you hence the tie. 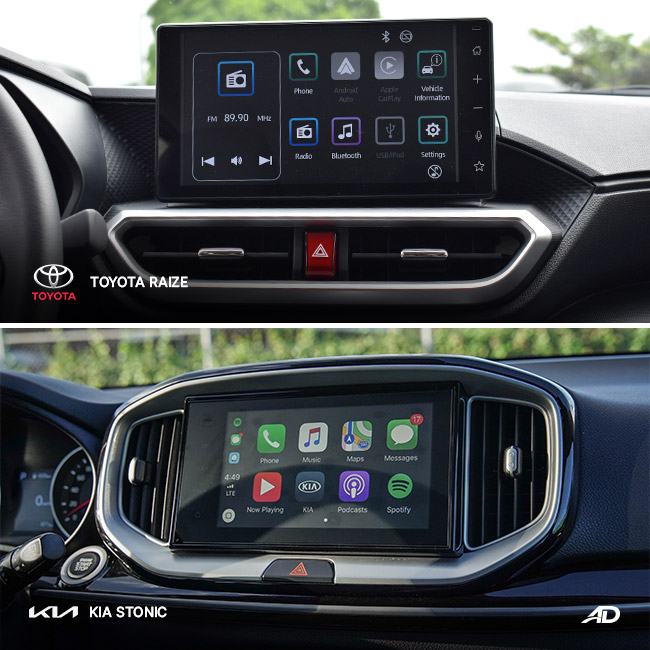 Here is where things get tricky as both crossovers are equally matched in this regard. Looking through their spec sheets reveals that the Kia Stonic comes with an 8-inch infotainment system as standard for its entire variant range. This means that even its entry-level variant gets this head unit along with the Apple CarPlay and Android Auto capabilities that it has as standard.

In the case of the Toyota Raize, it can be head with two infotainment systems to choose from. The first is the 9-inch head unit that is exclusively for its top-of-the-line Turbo variant. While the second option is an 8-inch infotainment system for its naturally aspirated models. Similar to the Stonic, whichever head unit you pick, it will come with Apple CarPlay and Android Auto as standard.

As both vehicles are evenly matched with only the screen size being the deciding factor, we will give this category as a tie. If that one-inch difference in screen size is a big factor for you we highly recommend going for the Raize. However, we do have to commend Kia for putting the 8-inch infotainment system as standard for all of the variants of the Stonic. 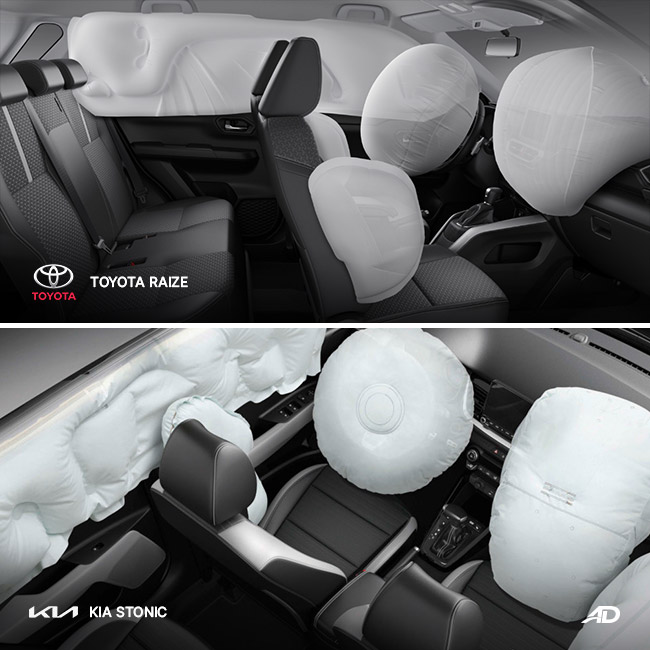 In terms of safety features,  the Toyota Raize immediately has the upper hand. The Kia Stonic only has driver and front passenger airbags along with ABS as standard for all of its variants. The higher models do get access to electronic stability control and hill start assist and an immobilizer. The Stonic also comes with a reverse camera as standard for all variants, with the range-topping EX variant getting reverse sensors as well.

The Toyota Raize comes better equipped as it has driver and passenger airbags, ABS, vehicle stability control, hill start assist, and reverse sensors all as standard. The Turbo model does get more airbags, totaling six, and it also gains access to certain Toyota Safety Sense features such as a blind-spot monitor and rear cross-traffic alert. Not to mention, the Turbo model also comes with a back monitor with guidelines and the addition of two front clearance sonar sensors as well.

With the clear advantage going to the Raize, it gets the win for this category. As far as the spec sheets are concerned, the Toyota crossover offers you a lot more safety features and even comes with a 5-Star ASEAN NCAP crash safety score. The Kia Stonic, on the other hand, doesn’t have one just yet but has scored well in the Euro NCAP crash testing also getting a 5-star rating back in 2017. 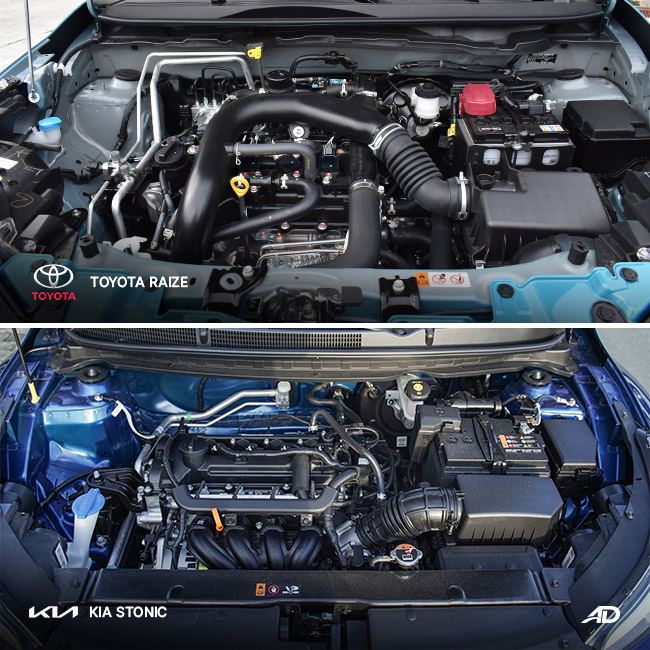 Under the hood, the two crossovers differ in what powers them. The Raize is available with either a 1.2-liter naturally aspirated 3-cylinder engine or a 1.0-liter turbocharged 3-cylinder. The 1.2-liter motor produces 87 hp and 113 Nm of torque, while the 1.0-liter turbo makes 96 hp and 140 Nm of torque. Power is sent exclusively to the front wheels via either a five-speed manual or a CVT.

The Kia Stonic, on the other hand, is only available with one engine option to choose from. This comes in the form of a 1.4-liter naturally aspirated 4-cylinder gasoline engine. It produces 94 hp and 132 Nm of torque. It sends power to the front wheels via either a five-speed automatic or a four-speed automatic transmission.

For this category, we give the win to the Kia Stonic, as it comes with only one engine option making sure that interested buyers don’t have to compromise on power if they can’t afford the range-topping variant. We do have to commend the Raize as it does produce more power from its 1.0-liter motor thanks to the turbocharger. 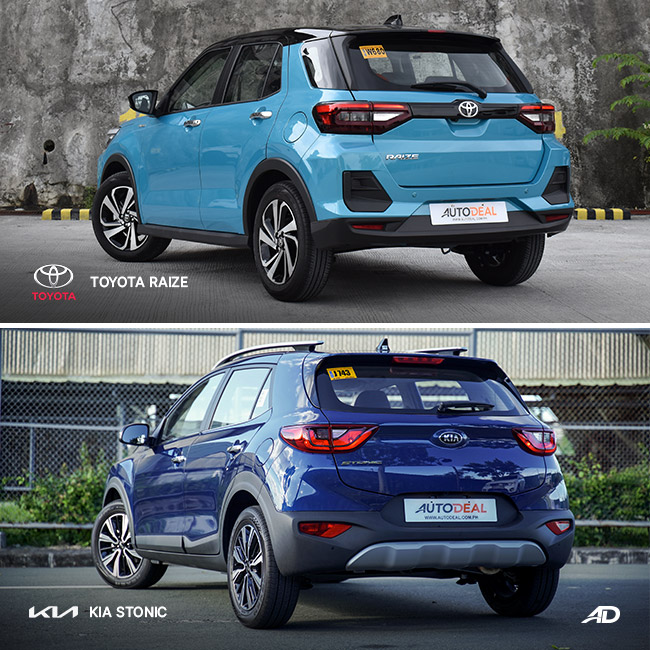 When it comes to pricing things between the two crossover gets interesting. The Kia Stonic in its entry-level variant is more expensive than its Toyota Raize counterpart. There is a P19,000 difference between these two models as the Stonic LX MT starts at P765,000 while the Raize 1.2 E MT starts at P746,000. On the other end of the spectrum, the Kia Stonic is the more affordable vehicle in its top-of-the-line form. It can be had for P955,000 for its range-topping EX AT variant, while the Raize can be had for P1,031,000 for its Turbo CVT model. This represents a difference of around P76,000 which could mean a lot to you especially if you are on a tight budget.

With that said, we award the win to the Kia Stonic for being the more affordable vehicle. The advantage of the South Korean crossover not only lies with its price but also with the features that it has as standard across its variant range. This makes it easier for interested buyers to get the vehicle in its lower variant as it already comes with much of the same features available in the top-of-the-line model. 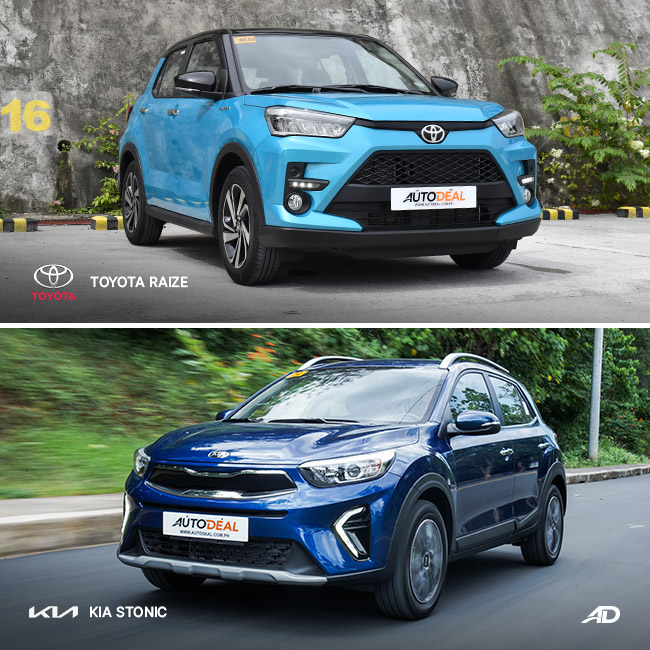 When choosing between the two crossovers, it will ultimately boil down to your budget. If a crossover that is well below the P1 million mark is your budget then the Kia Stonic EX AT presents itself as the better option to go with against the Toyota Raize 1.2 G CVT. It comes with more equipment and a more powerful engine. However, if you compare both top-of-the-line models spec for spec, then the Toyota Raize comes out on top. You get a much more powerful vehicle that also comes with a lot more safety features as well.

The overall winner for this head-to-head goes to the Toyota Raize. While the Kia Stonic has a lot to offer you for a far more affordable price point, we can’t overlook the extra safety features that the Toyota crossover has. Safety should be a major priority for you especially if you are looking for your first car or something to get your kids. Regardless of which crossover you pick, know that you are getting a great car that comes with its own unique merits features intended for the crossover segment.