Volkswagen has recently come back in style as the T-Cross is making waves in the segment. In terms of subcompact crossovers, it shares the arena with several newcomers and several veterans, one of which is the Honda HR-V.

So to settle a few disputes and to give you the verdict on which one is better, here’s a head-to-head comparison of the two crossovers. We’ll be pitting the two top-of-the-line variants against each other this time around, with some special mention of base-level trims for a broader perspective. 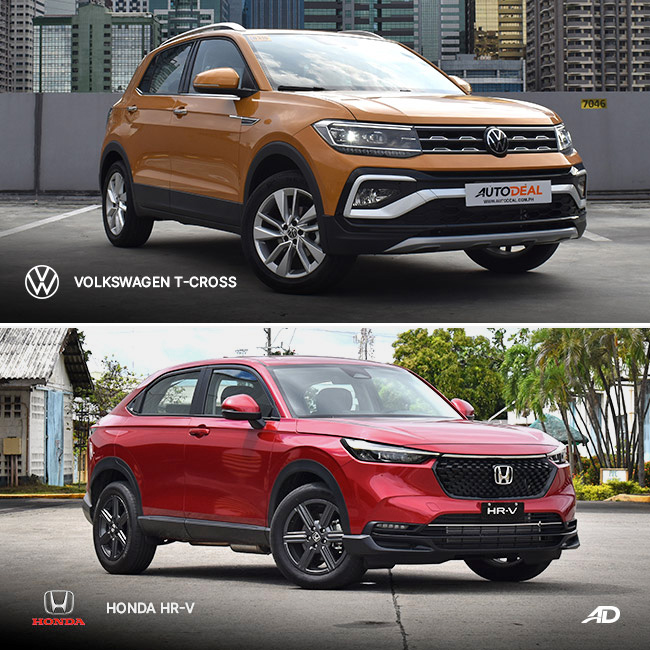 It is without a doubt that Volkswagen did their homework when it comes to young and modern design. The T-Cross looks absolutely youthful with its bright color scheme and its playful styling—well, for a Volkswagen. We’re used to seeing straightforward designs coming from the German brand, but the T-Cross does just enough to catch your eye but not sear its image into your memory. Don’t get us wrong, it’s not the most ultra-modern model in the market right now, but it’s enough to make you rubberneck just a bit. As for its kit, you’re greeted with LED headlights, DRLs, and taillights, but with halogen fog lamps, which is acceptable given the price point that this model competes in. On top of that, you get 17-inch wheels in the top trim and go an inch down if you want the base. 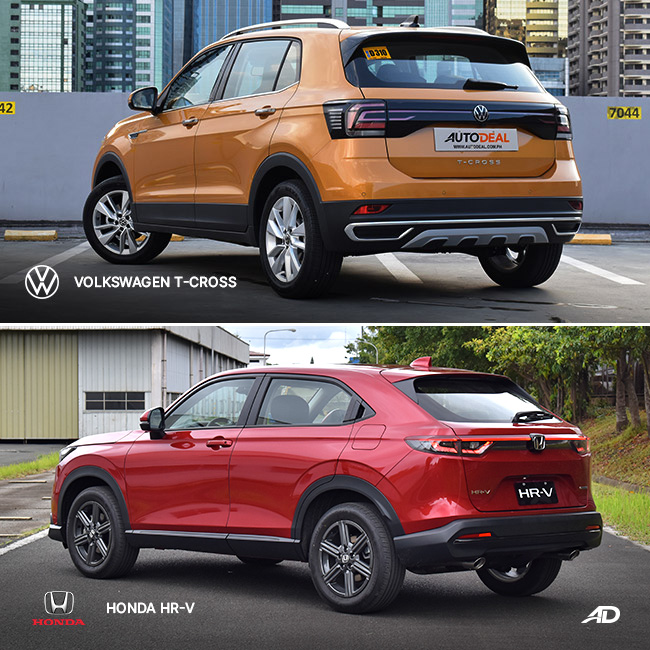 For 2022, Honda Philippines updated the HR-V with a brand-new look and platform that puts a large grille in the front of the car in place of the old-style split design that we've gotten used to with the predecessor. LEDs make a comeback for this iteration, and it's now sleeker than ever. Plus, instead of round foglamps, the new HR-V adopts a similar array to that of the CR-V, a row of LEDs. More LEDs greet you at the back of the car, and the taillights are sleeker and more modern compared to the large lamps found in the previous model. On top of that, you also get dual-exit exhausts without any fake finishers that make the HR-V in its RS trim a real looker. 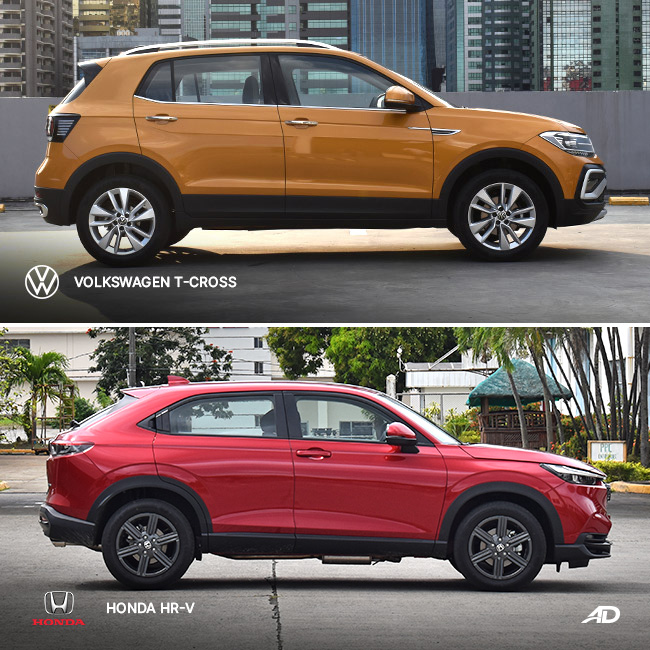 Prior to the update, the T-Cross would have taken the win, but now we're not so sure. The HR-V was a little perplexing for some buyers, with some saying that it has lost its youthful look in favor of a more robotic and mature body. It's not all bad, however, because as the saying goes: different strokes for different folks. Whether you like the personality that the T-Cross offers, or the future-forward design  of the Honda, it seems that the Japanese crossover looks tighter than ever and thoroughly new with its slim headlamps and its trimmed tail. Moving over to the interior of the T-Cross, and the boldness continues. Again, for Volkswagen, this is a pleasant surprise. We’re used to seeing very grey and black interiors from the brand, but the T-Cross doesn’t shy back to the norm that the brand imposed on many of its older releases. The T-Cross has the boldest interior of the bunch by far, and the interior color will match the exterior color for a fun and tied-together look. Other than the splash of color, however, you will notice that it is still the same general design that Volkswagen has been implementing into its cars ever since. Everything feels very familiar, and the model doesn’t stray too far away from the positively good ergonomics than other models have had over the years. Space is adequate, and you even get a panoramic sunroof. In terms of cargo area, the T-Cross has a trunk capacity of 319 L and a cargo capacity of 1,319 L.

Meanwhile, in the Honda camp, it’s ironically black and grey with a futuristic approach, now even more evident with the newest iteration. The dashboard is minimalistic and modern. Honda put its 8-inch infotainment system in a floating display, and all the buttons and touchpoints feel confidence-inspiring. There is also a dual dial multi-information display for the driver with a screen down the center. Still, however, it’s plenty spacious and comparable to compact-sized cars in the market. Even the trunk space is respectable at 335 L with a max cargo of 1,665 L. So it’ll boil down to the tech side of things, right? Volkswagen has incorporated its infotainment system with a large 9.2-inch touchscreen that gets Apple CarPlay. Great if you’re an iPhone user, not so much if you’re in the other smartphone OS camp. If you decide that the top-spec variant isn’t for you, then you can settle for an 8-inch unit that still has Apple Carplay. On top of that, cruise control is standard for all models, and you also get a reverse camera to ease backing up at parking lots. On the other hand, Honda's infotainment screen got better compared to its predecessor, with an 8-inch unit in the HR-V. This is a capable system with its own bespoke assembly and it retains the Apple CarPlay and Android Auto functionality. Even with the smaller screen, we cannot deny that Android Auto support is good just in case you aren’t on an iPhone. Cruise control is also available, and there is also a reverse camera for all your backward-driving needs.

So who is the winner? Well, the T-Cross pulled ahead in the first half, only to be trumped by the HR-V’s spacious interior. Then the T-Cross pulled ahead again with its display size, and then the HR-V sort of one-upped it thanks to Android Auto. Still, however, it seems a little too close to call for this round considering that the interior of the HR-V is new and filled with a lot less plastic. That being said, however, the T-Cross still comes with a panoramic sunroof which is a big factor if you're into using the vehicle for any sort of lifestyle activity like going to the beach. As such, Honda caught up to the T-Cross in the interior department so it's a tie. As for safety systems, expect up to 6 airbags for the Volkswagen T-Cross for the driver, front passenger, curtain, and side airbags. On top of that, the T-Cross scored a 5-star rating with the Australian, Euro, and Latin NCAPs making it one of the safest in the market. Features of the T-Cross include hill-hold control, electronic stabilization program, along with the standard ABS with EBD. You also get ISOFIX tethers for easy child seat installation.

A total of four airbags can also be found on the HR-V, and that includes units for the driver, front passenger, curtain, and side. ABS is also standard as is EBD, and it also has stability control, hill-start assist, and ISOFIX tethers just like the Volkswagen. The Euro NCAP rating for the new HR-V is pegged at four stars, however. Though the HR-V in all trims comes with Honda Sensing, which includes collision mitigation, road departure mitigation, lane keep assist, adaptive cruise control, and low speed follow.

It could just be a matter of NCAP ratings, but it wouldn't be fair to base it on crash testing. The T-Cross gets an edge for crash safety but loses out on the Honda HR-V's suite of active safety features. It's better to avoid the crash entirely than to survive it right? As such, it's a tie. In terms of power, the T-Cross comes relatively well-equipped as a subcompact crossover. With a 1.5-liter naturally aspirated gasoline engine, the model makes 111 hp and 145 Nm of torque, similar to a subcompact sedan. With the extra weight of the vehicle, it’s not that quick off the line. It still, however, has a 6-speed automatic transmission, which means that it feels pretty solid to shift up and down the gear ratios.

There are two options in the lineup for powertrains. While both motor options are equipped with CVTs, the beating heart under the hood can either be good, or great depending on the variant that you get. If you're on a budget, the naturally-aspirated engine of the HR-V makes 119 hhp and 154 Nm of torque. If those figures seem familiar, that's because it's the same motor found in the new Honda City. Stepping up a notch, you'll get 174 hp and 240 Nm of torque with Honda's 1.5-liter turbocharged motor which it shares with the Honda Civic.

Whether you go with the base engine option of the HR-V or the top-spec option, it's clear that the Honda will beat out the T-Cross in terms of engine performance. While there are folks out there that say a CVT's not so great to drive, Honda did dial the transmission in a bit to deliver better engine response compared to other brands.

Things get even more interesting if you look at these two vehicles’ prices. The most expensive T-Cross is more affordable than the most affordable HR-V. At just P1,198,000, you are getting a lot for your money’s worth in comparison to the Honda. The HR-V tops out at P1,598,000, and starts at just P1,250,000 which is a decent price bump comparing the base trim to the top trim of the HR-V and T-Cross, respectively. Factoring in all the trimmings and features that you get, however, the HR-V seems like a better deal delivering a more modern aesthetic along with more safety features and extra infotainment functionality.

However, the T-Cross is a bit of a bargain if you're not too picky about driving dynamics and other exciting factors. As a car that just works, it's definitely more affordable than the Honda.

If you asked us prior to the update, the Honda HR-V would have lost to the T-Cross. Now, however, it's a closer battle and Honda has stepped up every aspect of their crossover following the new generation's launch in the country. The HR-V has an even bigger fighting chance against the rest of the competition now that it has been updated with a new design and turbo power.

However, all that good comes at a price. The Honda HR-V is pretty expensive, but it offers a better drive compared to the T-Cross. It's also got a bit more space and a few more features so your money is definitely going somewhere. However, the T-Cross presents itself as a comparable and budget-friendly choice in the market. As such, it still holds its own against the HR-V, but the base trim of the Honda is only a bit more expensive and should be up for consideration if you're already looking at the top-of-the-line T-Cross.

As such, it really depends on your budget. If you're hovering around the 1.2-million Philippine Peso mark, then it's a hard comparison to make. If you don't really mind the price and just want the best between the two, the top-of-the-line HR-V certainly is the more superior car.