Isuzu has long been known for their tried and tested diesel engines which are used on both their trucks and vehicle lineup. Many Filipinos seem to patronize the Japanese automaker, from the legendary Crosswind, which is now out of the line but still continues to transport many families on the road, the D-MAX that’s suitable for hauling cargo, and its ever-popular midsize SUV, the Isuzu mu-X.

Locally, the mu-X doesn’t have an extensive timeline just yet, granted that the Philippines market still has its first-generation model up until now. Despite that, we’ll still give you a quick run through its short history, spanning from its predecessor right to its second-generation model that’s already being sold in other markets already.

Related: Is the Isuzu mu-X worth it?

Its great ancestor, the Isuzu Alterra 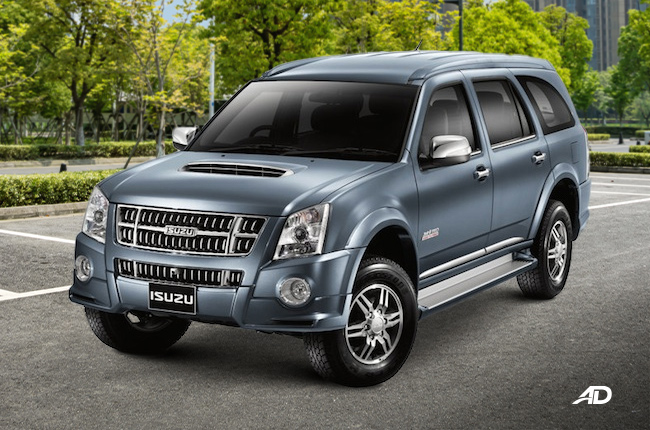 Even before it came, Isuzu used to sell the Alterra or also known as the mu-7, which is the predecessor of the mu-X. This model made its Philippines debut towards the end of 2005 counting it as a 2006 model. Like today, the midsize SUV also shares the same platform as the D-MAX that could either be reinforced with a 4x2 or 4x4 drivetrain. Under the hood is a 3.0-liter turbo diesel engine churning out 144 hp and 294 Nm of torque.

Notably, one of the unique quirks of the Alterra is its wagon-like looks. Back in the day, it is by far one of the most unique-looking midsize SUVs in its segment. It’s not the most powerful in the competition, but it certainly does well in terms of fuel efficiency and reliability. A few years have passed and the Alterra bid farewell to the market in replacement of the Isuzu mu-X. Since its Philippine launch on September 9, 2014, this midsize SUV quickly became a go-to option for those looking to buy an affordable and dependable vehicle. Three trims were initially available, namely the LS, LS-M, and LS-A.

Like the D-MAX, the mu-X too shares the same platform with the Chevrolet Trailblazer and Colorado, what’s different though is its engine. Back then, the mu-X can only be had with a 2.5-liter motor that could either be mated to a manual or automatic gearbox. The range-topping trim comes is available in 4x4 while lower variants feature a 2WD drivetrain.

It was indeed a more suitable entry to the midsize SUV segment with the mu-X facing the likes of the first-generation models of the Toyota Fortuner and Mitsubishi Montero.

It got an upgrade Along with that, the new mu-X also comes with quirky convenience features such as its special ambient lighting which elevates the overall cabin ambiance during nighttime. Overall, the following upgrades applied to the mu-X gave it more advantages in the competition. In early 2020, the Japanese automaker, once again, delivered updates to the Isuzu mu-X. Though, unlike the previous refresh, this one is a bit subtle, as the following changes can only be seen on its new set of 18-inch wheels along with an updated infotainment system that features Apple CarPlay and Android Auto.

Even after its 7th-year life cycle, the mu-X still remains a go-to option for those Filipinos looking for a reliable and durable midsize SUV. The mild update just goes to show that Isuzu Philippines does go by the saying: “Why fix it if it’s not broken?” International markets like Thailand and Australia already have the second-generation Isuzu mu-X, and soon, other countries in the ASEAN region will also get it. There are a lot of things to be excited about the all-new mu-X. Aside from its sleeker exterior and well-appointed cabin, the midsize SUV has a lot to offer in the safety department.

While we’re still unsure of its Philippine specifications, the all-new mu-X is set for a Philippine debut this September 22, 2021. For those who are excited, you can register your interest here at our site and get the latest updates on the upcoming model.