Siquijor, an island that is as mysterious as it is beautiful. Nissan Philippines brought us to a location that is known for its mystic traditions as well as its natural beauty and barely-touched landscape. Nissan pinned this area to be the Go Anywhere campaign’s next stop, and they invited us for a drive around the rather small province. Only accessible by boat, the area’s seclusion is already a testament to just how small it is. We had to fly from Manila to Dumaguete first, then ride a boat to the location, and drive a selection of Nissan’s LCVs that comprise of the Terra, Navara, and Patrol. It seems like overkill to get to this island, seeing as we used land, sea, and air transportation mediums just to get there, but it was all worth it. On the first day of our stay in Siquijor, we climbed to one of the highest points on the island. None of the LCVs broke a sweat, even if they all came equipped with highway terrain tires; not the most optimal choice especially when tackling loose surfaces. The second stop brought us to a quarry, where the surface was loose and breaking traction was very possible. After a few stints in dirt and gravel, Nissan brought us to historical landmarks, like the Lazi Convent. After that, we were brought to Cambugahay falls, a small oasis secluded away from civilization, our own pocket of nature. We then turned our attention to the Balete tree in Lazi, which is about 400 years old. The strangler fig, as it is known in English, is said to be the dwelling place of mysterious beings from Filipino folklore that helped to cement the island’s mythical aura. In order to get to all of these locations, we needed vehicles infused with Nissan’s prowess for building Go Anywhere machines. In the three days we spent on the island, we were able to experience all three models in Nissan Philippines’ capable LCV lineup through paved and unpaved roads that include steep inclines and tight turns. This pickup from Nissan is as rugged as they come, yet the ride quality might mislead you into thinking you’re sat in a sedan or crossover. You’d expect to feel a little bump here and there on the road, but that’s not the case because of the multi-link suspension in the rear. It rides well and goes over bumps and potholes on the road without creating too much of a fuss in the cabin.

Features-wise, the Navara is quite equipped. Nissan let us drive a VL variant, which came with the brand’s most advanced infotainment system that features a bigger display and Apple CarPlay and Android Auto connectivity. Pairing our smartphones and viewing navigation data and media information was a cinch thanks to the larger touchscreen LCD.

Driving this truck was enjoyable, taking a corner in the unit that we were given was a joy simply because of the controllability of the chassis. Handling is was one of the best features of the Navara on the drive, a trait that is held in just as high of a regard as ride comfort. I still remember the days when PPV fans were egging Nissan to create an SUV that is based on the Navara. People were quick to laud the Terra for its ride quality on the road, but off the beaten path, like its pickup brother, it performed stellarly without drama and without any problems. The Terra was in its VL 4x4 variant, and it had leather-clad seats, the same advanced infotainment system capable of Apple CarPlay and Android Auto connectivity. We were able to fit our bags in the flat cargo area without any issues. Nissan was also kind enough to provide us with refreshments and snacks on this trip, and we had no problems fitting the sustenance in the car, and subsequently, our rumbling tummies. We even had enough space to stretch our legs and grab a few minutes of shut-eye. Even under the heat of the sun, the Terra’s aircon vents kept the cabin’s temperature at a comfortable level even for the back passengers. I can safely say that we were all spoiled for space in the Terra, but all of that paled in comparison to Nissan’s flagship SUV. Here is where Nissan originated, one of the most enduring nameplates in the brand’s history was ready for us to drive in Siquijor. The SUV is by no means a handful to drive. Even on the open roads, the full-size behemoth was a cinch to control and didn’t feel heavy. The steering is light, and it took turns with confidence. It had a boatload of features that were delightful to use. 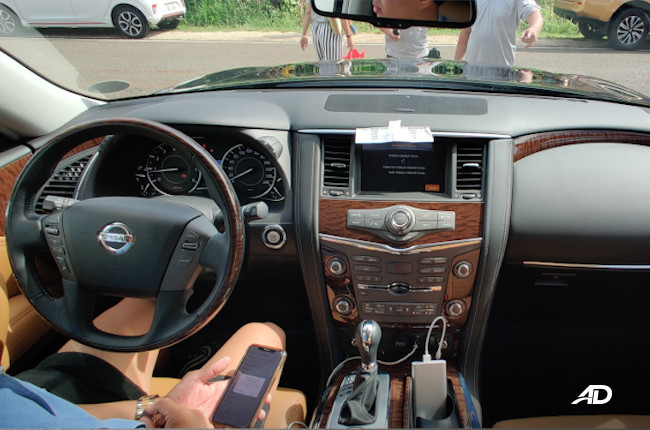 We sat in the plush interior of the Patrol that was clad in leather, which was uber-soft in its execution. Space was immense and all-encompassing. Every passenger in the car was able to stretch their legs and enjoy the ride. Second-row passengers were treated to a pair of nice displays located at the back of the front seat headrests, which paired with a set of headphones that come with the car to isolate noise coming from the outside. All four of us were able to charge our phones through the use of multiple USB ports scattered throughout the cabin. None of us were left wanting. If the Terra’s and Navara’s ride was great, then the Patrol’s was next-level. We weren’t aware of the bumps that we were going over on the road. When things slowed down, and a few speed bumps arose, the cabin remained stable as no intrusions were felt. It did feel like a vacuum because the NVH insulation was just that good. We couldn’t help but get a few minutes of rest after a long day exploring the island. Oh and to top it all off, it went over gravel without complaint. It’s business class on wheels, even over rough roads.