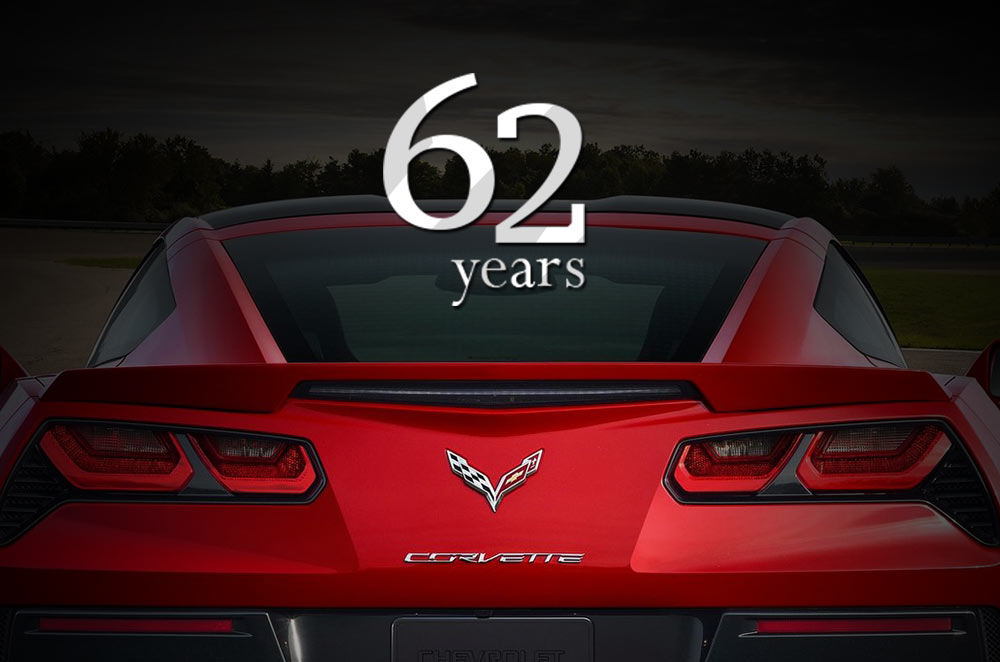 Spanning seven generations, the iconic Chevrolet Corvette is a true American legend, and one need not even have to delve deep into the archives and be an automotive geek to exclaim that the Corvette is a true definition of what an American sports car should be – big, wide, with long hood, powerful, RWD, top-less, and can be occupied by two people only. Let’s take a look back in time, and witness how this Iconic American sportscar was born.

First seen as a show car in the 1953 General Motors Motorama in New York, the Chevy Corvette Concept Car (as it was first announced) featured a convertible layout. Technically known as the Corvette C1, this car pulled in so much interest from the ’53 Motorama attendees, that Chevy wasted no time and immediately went into hand-built mass production mode on June 30, 1953.

Designed by Harley Earl, the ’53 Corvette sported a 3.9L 155hp Inline 6-Cylinder engine. It came as a rear-wheel-driven sports car, controlled via 2-Speed Powerglide AT. Initially available in “Polo White” exterior with red and black canvas soft top, only 300 hand-built ’53 Corvettes rolled off the assembly line to serve as a sales evaluative batch, leading to its refinements in 1954. By 1954, Chevy went full-on with the Corvette C1’s production, improving its every iteration until 1962.

Written in the automotive history books as one of the meanest, most “bad-ass” looking Corvettes ever made, the 1963 Chevrolet Corvette C2 “Stingray”. The Stingray marked the Corvette’s introduction of its coupe line. Featuring a futuristic wind-cutting silhouette, the ’63 Stingray had an aerodynamic pointed front fascia, hide-away headlamps (think of the Lamborghini Countach), peaked fenders, and a longer hood which was rounded altogether with a fastback profile, making it a benchmark design for future Corvettes to follow.

Highlighting its performance aspects, the ground-breaking ’63 Stingray was powered by a 5.4L Small Block V8 with a choice of either a 3-Speed MT, a 4-Speed MT, or a 2-Speed Powerglide AT. Keeping its rear-wheel-driven layout, the ’63 Stingray debuted Chevy’s Independent Rear Suspension, making it a more stable car on the road.

Following the revolutionary benchmark that the second generation Corvette has made, the need to excel was keenly felt. This third gen Corvette featured a smoother and sleeker-looking body, a pointier front end, a much more pronounced front fender arc, and a lower and broader stance. In addition, the C3 Stingray also carried the first removable T-Top for its coupe variants.

Technical and performance improvements for the C3 and its fourteen-year production stint have been seen. Surpassing its predecessor’s 7.0L V8 was its 7.4L LS4 V8. The introduction of the brand’s first turbo-hydraulic 3-Speed AT was also seen during the C3’s latter year models.

With the looks to thrill and the revolutionary FMR (Front-Mid Engine Rear Wheel Drive) layout, the fourth gen Corvette C4, which was unveiled in 1983 had refinements that were at par with some of the world’s top supercars at that time. First off, is an even smoothed out body design, which pierced through the wind like a hot missile. The 80’s advancements in automotive aerodynamic technology helped it to attain such a remarkable aesthetic. Furthermore, the Corvette C4 also has evolved its structure, as its body panels, particularly the bumpers, were made of molding plastics, departing from the traditional fiberglass material. The Corvette C4 also featured a glass hatchback, adding class, elegance, and practicality, as it allowed more storage space, making it an ample daily-driver.

Not just for show, the Corvette C4 had the word “GO!” on top of its resume, as it was fitted with a 5.7L V8 engine, which was ramped up in power and performance as the years went by, ending in 1995 with the Corvette C4 ZR1 model, sporting a beasty 375hp 5.7L LT5 V8. Positioned in a manner that would improve general handling and weight distribution, the Corvette C4’s FMR powertrain made it one of the most agile Corvettes ever built.

From 1984 to 1988, the Corvette C4 featured a “Dog Nash” 4+3 Transmission (A precursor to today’s Automated Manual Transmission). This featured a 4-Speed manual transmission, fused to an automatic overdrive for the 1st, 2nd, and 3rd gears. This was done to meet the by now stricter US fuel emission laws. Production of the Corvette C4 ended in 1996.

Entering the 21st Century with a bang, the Corvette’s fifth gen saw its power plant and other performance enhanced. Carrying the well-proven FMR layout from its predecessor, the Corvette C5 not only looked great, but it also handled greater, thanks to its more computerized handling management and an all-new transmission layout.

This newly-restructured transmission comprised of either a 6-Speed MT or a 4-Speed AT, which was relocated to the rear of the car to form an integrated transaxle. A torque tube then connected this transaxle to the C5’s new 345hp 5.7L LS1 V8 engine, all in all have providing the car with an even more responsive, yet very satisfyingly aggressive handling and performance.

Coming in fresh from the C5’s success is the 2005 debut of the Chevrolet Corvette C6. Adapting the tried and tested formula of carrying over the aces of the predecessor, the Corvette C6 was both alike and nothing like its predecessor. For starters, it’s got a new body styling, highlighted by a brand new set of exposed headlamps.

But what it inherited from the C5 has made it a more formidable machine on the road and on the track – the rear-mounted transaxle assembly and the connecting torque tube. That stunning contraption was also on the C6, and it was further amplified via the introduction of a set of more powerful V8 engines, like the new 6.9L LS9 V8. Though slightly smaller in displacement, its Eaton-Supercharger boosted its output up to a stunning 638hp, making it the most powerful engine ever to be fitted onto a Chevrolet production automobile.

Considered by many as one of the longest running automobile lineage, the Chevrolet Corvette is now in its seventh incarnation, and what an incarnation is it! By tradition, it’s called the Corvette C7, and adding to that prestige is the revival of the legendary Stingray name, last seen on the Corvette C3 in 1976.

Originally planned for release in 2011, the C7’s entry was delayed in order to study further the developments that were needed to enhance its appeal in both looks and performance. Targeting enthusiasts of a younger age, the C7’s rebellious aura was like that of the C2 Stingray’s from six decades ago.

With good looks comes greater characteristics, and the Corvette C7 has it all packaged within. Under the hood of the C7 is a massive 6.2L V8, with a choice between an LT1 and a Supercharged LT4. Transmission package was also upped, with the introduction of three new options – the 7-Speed TREMEC TR-6070 Manual, the 6-Speed GM-6L80 Auto, and the massive 8-Speed GM-8L90 Auto.

Studded with today’s finest electronics that manage overall performance, handling, and entertainment, the Chevrolet Corvette C7 Stingray will definitely carry on an entire lineage of success for the next generation.