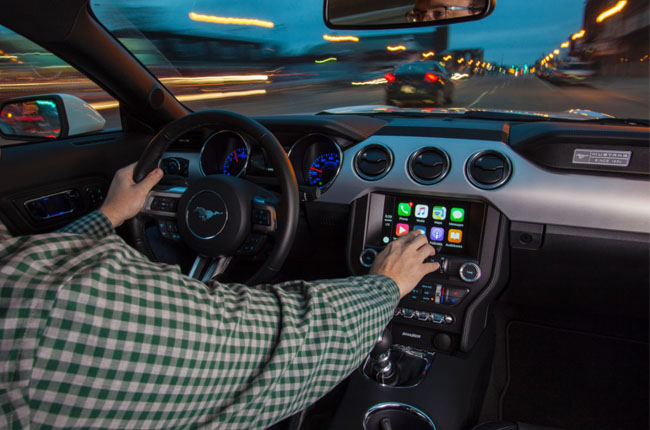 Ford’s SYNC 3 infotainment system will be available in their entire 2017 vehicle lineup. This means cars, crossovers, SUVs, pickups, and even electric vehicles of the American marque will receive the new headunit which will now feature Android Auto and Apple CarPlay.

The new SYNC 3 will offer fast connectivity for both Android and iOS mobile devices. More specifically, it works on Google Android 5.0 devices and up, as well as Apple iPhone 5 and later models. It’s been updated for 2017 with all-new hardware and software for faster performance.

It will have features such as voice recognition, hands-free calling, and navigation. In addition, SYNC 3 can hook up to a smartphone via 4G LTE connectivity and remotely start the engine, unlock doors, and locate the car in a parking area. Finally, its AppLink can also provide easier manipulation of apps such as Spotify, Pandora, and AccuWeather via steering wheel controls, voice command, or touch screen.

Ford is not taking the traditional approach of introducing Apple CarPlay and Google Android Auto as an expensive option on luxury vehicles only. If you buy any 2017 Ford vehicle equipped with SYNC 3, you drive off with both of these innovative technologies ready to go,” said Jeffrey Hannah, Director of North America for Global Automotive Technology Research Firm SBD.

Today, the new headunit is only available in the US. But by 2020, Ford will have it available in other countries, with future plans to have it constantly updating via Wi-Fi internet connectivity.  Hopefuly Ford Philippines will adapt the SYNC 3 system on its models soon.