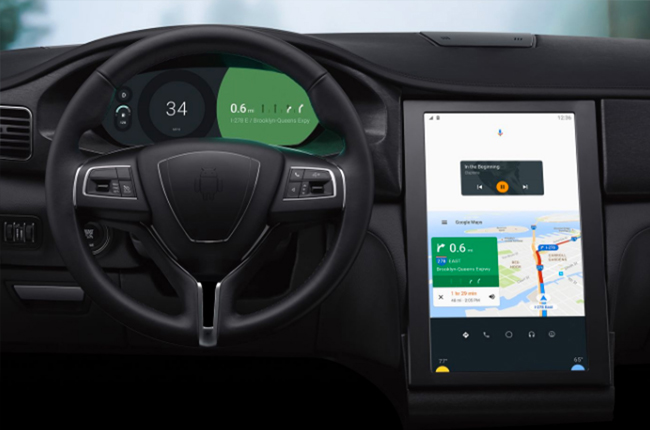 At the Google I/O conference, the tech giant revealed its innovative car infotainment system called Android Auto. This allows drivers to control more than just the navigation and entertainment systems of a car, but also the air conditioning system, heated seats, electric windows, and door locks.

All these are housed in a huge split screen tablet on the center console that runs on Android Auto N. Google also integrated 3 of the most requested apps by users into the system - personal assistant service ‘OK Google’, the navigational app Waze, and Wi-Fi support.

Although, we probably have to wait a few more years before it’s available for consumers as it’s still in its developmental stage.

The interface is user-friendly and optimized for driving. The activity bar at the tablet's bottom shows Android Auto’s main apps icons. The ease of access helps the driver explore the navigation, dialer, home button, and music player.

One really cool feature of the infotainment is the voice messaging. Yes, Android has this for some time now, but how Android Auto performs is what really impressed us. With a tap of an icon, it reads messages clearly unlike the robotic voice from the older versions of Android. The voice reply function also blew us away as most apps like can barely recognize a word. This is not limited to just texts and can also be used in other messaging apps available for Android Auto.

Most of the items above (if not all) are made to keep the driver’s eyes on the road. That's why Google added a simple, legible way to keep track of the current app being used with a screen on the gauge cluster.

Apart from the speed, fuel, and temperature, the instrument panel shows Google Map’s directions turn-by-turn. It can also display the next track on your music playlist.

Google and Qualcomm used a Maserati Ghibli as a test bed in developing the new Android Auto. Unfortunately, they haven’t announced yet when they will launch the same system the Ghibli has for consumers. But cars that already have the previous version of Android Auto are expected to get an update which include Waze, ‘OK Google’, and Wi-Fi connectivity in late 2016.

Since its first launch in 2014, the project is now supported by 40+ manufacturers and over a 100 models today use Android Auto. By the end of the year, the tech giant aims to double the number to 200 models.

You can compare quotations simultaneously from multiple Maserati dealerships. Select your preferred dealers from the list below.

Get Notified about Maserati Deals