Hyundai teased a new 7-seater known as the Alcazar. Essentially, this upcoming model is a stretched-out Hyundai Creta, expanding Hyundai’s range of three-row crossovers which already includes the Santa Fe and Palisade. Based on the photo, the model is also available as a 6-seater, with the second-row accommodating only two occupants.

From being a small crossover, the Hyundai Creta will soon have a more spacious counterpart for larger families, which is the Alcazar. Of course, in order to achieve this, there are certain changes made on its exterior dimensions in order to accommodate the two extra seats on the third-row. 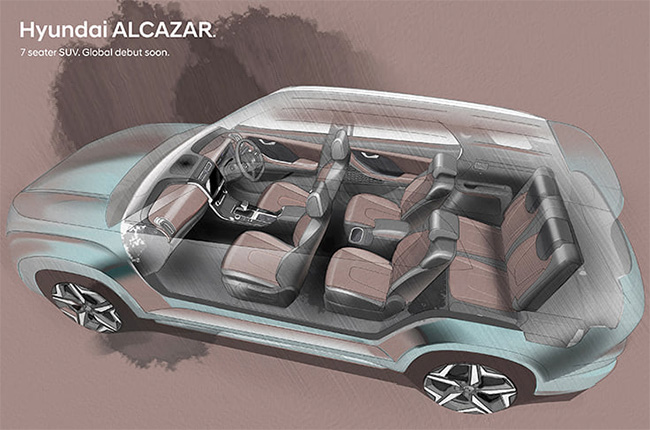 As mentioned, the Hyundai Alcazar will also be made available with a 6-seater, as the second row can be opted with two seats along with a center armrest which also serves as extra storage space. Aside from that, cup holders are also in place for both middle-row occupants.

Based on the images, the styling of the Alcazar doesn’t appear to be quite far from the Creta, which is actually expected as it is based on the said model, after all. However, there are some contrasting bits between both models, such as the Hyundai Alcazar’s taillights that appear to have a C-shaped light pattern. Also, the third brake light is now integrated into the roof-mounted spoiler, unlike on the Creta, where it’s integrated on the tailgate instead.

What makes this a bit more exciting is that back in December 2020, reports disclosed that some anonymous source from the brand revealed that the Creta is going to enter the Philippine market in the form of a seven-seater. Perhaps, this could be it. The Hyundai Alcazar will be making its global debut on April 6, 2021, before going on sale in India.