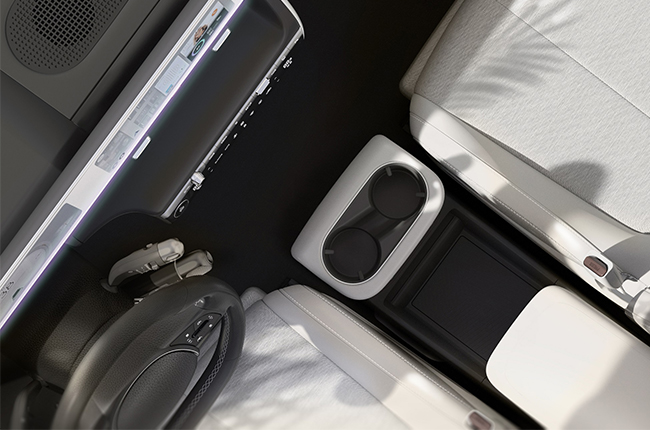 Hyundai has released a teaser image of the interior of its upcoming Electric Vehicle (EV), the Hyundai Ioniq 5. The South Korean brand has released a photo of the vehicle’s interior along with a short teaser video briefly showcasing its sliding front row functionality.

The South Korean automaker has also stated that it will use a combination of sustainable surfaces, which includes eco-processed leather that has been treated with flax oil, and PET-based woven materials along with other natural and recycled fibers. As for its chassis, Hyundai has disclosed that it will be using the E-GMP platform for the upcoming Ioniq 5 EV, along with its own in-house battery pack that will lay flat under the passenger floor. The automaker says that this design will allow the vehicle more flexible interior space. The new EV is also rumored to take the form of a crossover and will have broader proportions, unlike the Hyundai Ioniq that it shares its name with.

Dubbed the “Universal Island’ function, this allows for the consoles found in the vehicle to move around instead of being a stationary storage area. Hyundai says that it can slide back and forth, and can be paired to move with either of the front seats. This, in turn, allows either the driver or passengers to enter or exit on any side of the vehicle, and enables Hyundai to save on manufacturing costs to adapt the vehicle for the left- or right-hand-drive markets.

Hyundai has also stated that the Ioniq 5 will be capable of fast charging, in which the vehicle can gain more than 62 miles worth of range in around 5 minutes charging time. Speaking of charging speeds, the Ioniq 5 is said to have 800v hardware onboard and is rumored to be able to charge to 80% in just 18 minutes. it will also come with a 3.5-kW vehicle-to-load function that will act as a backup source of electricity in the event of power outages.

While the South Korean automaker hasn’t revealed much about the exterior of the Ioniq 5, we can expect it to look similar to the 45 Concept that the brand debuted in 2019 at the Frankfurt auto show.

Ioniq 5 is a statement of design that offers an optimistic look at what customers can expect in the new EV era.
SangYup Lee
Hyundai senior VP and head of the company’s global design center