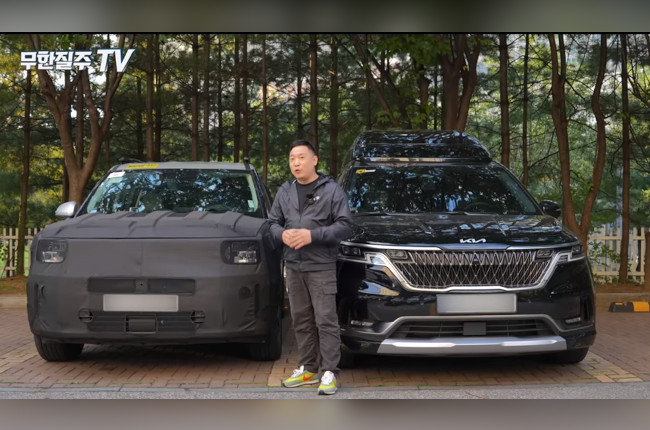 The Hyundai Santa Fe’s getting a little old now, and it’s about time we get a look at the next-generation model. Hyundai is out testing the new model while it wears camouflage and covers on public roads, and this guy chanced upon it and proceeded to do a little walk around, or so we’d like to assume.

Hyundai appears to have employed a square or boxy design for the 2024 Santa Fe. Even under all the covers, you can see the outline of the crossover’s silhouette and like lingerie, it leaves some things up to the imagination. There are cut-outs in all the needed places like the headlights which are still located in the same place as the current model. The walkaround also reveals that it will get parking sensors in the front and a front grille that might not be as large as the current one.

The Santa Fe has also developed a rather large hump on the hood, and towards the side. The wheels are now flat which is in keeping with the style associated with hybrid vehicles.

We also get to see some more rugged functional styling elements such as the roof rails on top. This suggests that the general look of the Santa Fe will lean more towards the adventurous side of things. Then, all that boxiness is broken up by the round side mirrors.

The YouTuber even goes a step further and peeks into the windows of the covered vehicle, which reveals an upholstery with a plaid pattern and a light color on top. While this may not be the final production model, it’s likely that Hyundai could field a bunch of interior color options for the model.

While the YouTuber was talking about the Santa Fe and doing his thing with the walkaround, you can spot a little note on the window that signs “no pictures” or “no camera.” Clearly, the sign was ignored by the YouTuber, but that lets us get a look at what is to come from Hyundai in the near future.