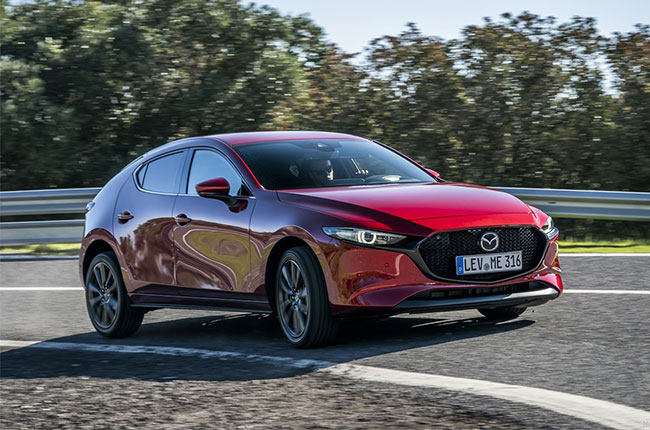 Burning questions about the Mazda Skyactiv-X engine are slowly getting answered. Official statements are bits of gold that drop from the Kodo-design manufacturer seeing as the engine is quite potent because of the spark plug controlled compression ignition (SPCCI) tech that give this engine some impressive horsepower and torque.

Indeed it is impressive, since Mazda’s engine produces 177hp and 224 Nm of torque. All this is coming from a displacement of 2.0L. To put things into perspective, performance tuned engines with the same displacement tend to make more power at even higher redlines. Maximum power in the Skyactiv-X engine however is achieved at only 6,000rpm, whereas other engines need to rev to the sky to get figures like these. Another key element to the engine is the added torque over other cars. Where naturally aspirated engines of old would produce low torque figures, the Mazda engine puts out turbo-level torque without the turbo.

With a compression ratio of 16:3:1, the engine uses the same concept that ignites fuel in diesel engines. With this technology, the engine ensures that every joule of chemical energy that comes from the engine is maximized. With combustion efficiency on its side, the emissions become minimal, since only 96 grams of CO2 are emitted per kilometer.

The Worldwide Harmonised Light Vehicle Test Procedure (WLTP) is a procedure that came from an old standard called the New European Driving Cycle (NEDC). While the latter has the word ‘new’ in its name, it definitely is not, since the test was designed in the 1980s. While these figures seem high, it is important to note that the testing was done in Europe, so we’re holding our breath until we get our own testing done. Nonetheless, the combined driving readout shows that the engine returns a fuel economy figure of about 15.87 km/L for the front-wheel-drive automatic transmission hatchbacks and sedans fitted with 18-inch wheels. While interesting to look at, with all-wheel-drive the engine performs worse at 14.49 km/L. Interesting since Mazda seems to be silent about the AWD variant for now.

In Europe at least, the engine can be had with a manual transmission, and fuel economy seems to be similar between the automatic and manual.

Paired with the engine is also a hybrid motor. Mazda’s M Hybrid technology is a 24-volt system that recycles energy recovered during deceleration by charging an electric motor that works in tandem with the gasoline engine.

We are all dying to try this revolutionary engine from Mazda. Other countries are already getting their hands on these units and we can’t say we aren’t jealous. Hopefully soon we’ll get to put the engine through its paces as well as test if that fuel economy figure holds up in the horrendous traffic of Metro Manila.