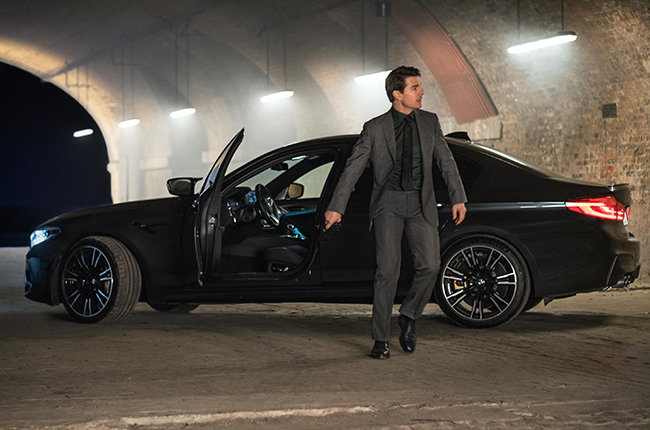 While Britain's well-known secret agent (pun intended) James Bond is out there enjoying his Aston Martin collection, American operative-turned-fugitive Ethan Hunt kicks butt with his German-made vehicles. BMW has teamed up once again with Paramount Pictures for its newest film, "Mission: Impossible – Fallout."

Basically, the plot has Ethan Hunt (Tom Cruise) racing against time after their last mission went wrong. Good thing, BMW's there to help them run around cities, chase some bad guys, run away from some bad guys, and other stuff that needs on road action. Based on the photos from the movie, it seems like Hunt and his team will be riding a 4.4-liter V8 biturbo-powered BMW M5, BMW 7 Series Sedan, including a glorious 1986 BMW 5 Series Sedan. The said models are styled with M Performance kits like the black kidney grille and carbon fiber mirror caps. Not only cars, our protagonist will also ride a BMW R nineT Scrambler, BMW's rad café racer-style motorbike. This will be his weapon for fast-paced and wild chase scenes around Paris. We're thrilled already.

“BMW and ‘Mission: Impossible’ are a perfect fit. We are proud of our long-running partnership with Paramount Pictures and that our powerful cars and motorcycles have been able to enhance this iconic film series time and again. For exciting chases, you need cars with impressive driving dynamics and handling.”
Uwe Dreher
BMW, BMW M, BMW i's head of Brand Communications

As die-hard fans may recall, the BMW i8 hybrid sports car along its high-tech feature made its cinematic debut in the 2011 Mission: Impossible – Ghost Protocol. Meanwhile, in the 2015 installment of the movie, "Rogue Nation", saw the BMW M3 and the S 1000 RR motorcycle that raced the mountains outside Marrakech, Morocco.

Also, part of the collaboration, BMW's "Mission to Thrill" marketing campaign will be used to support the promotion of the theatrical release. The partnership dates back from 2011 and has provided fans with tons of classic moments.